Regarding the front-end unit test, I actually paid attention to it two years ago, but at that time I simply knew the assertion, thinking that it was not too difficult, and it was not used in the project, and then I assumed that I would do it for granted. .

Today, two years later, the department needs to add unit tests to previous projects. When it was really time to start, but I was confused 😂

What I thought I thought I had pitted myself, and I found that I didn't know anything about front-end unit testing. Then I read a lot of documents, found on dva unit test documentation is relatively small, so after some practice with, I brushed a few articles, I hope to think use Jest were React + Dva + Antd unit testing you Can help. The content of the article strives to be in-depth and simple to understand~

Because the content is all contained in one article, it will be too long. The plan is divided into two articles. This article is the first one. It mainly introduces how to quickly get started with jest and the functions commonly used in actual combat and api

🏈 The background of front-end automated testing

Before introducing jest , I think it is necessary to briefly explain some basic information about front-end unit testing.

For the project itself, React + Dva + Antd is used, and the unit test we use is the combination of Jest + Enzyme

About Jest , we refer to it Jest official website , it is Facebook open source front end of a testing framework, mainly for React and React Native unit testing, it has been integrated in create-react-app in. Jest features:

Enzyme is the Airbnb open source React . It provides a set of simple and powerful API and built-in Cheerio . At the same time, it realizes the jQuery style method for DOM processing. The development experience is very friendly. React popular in the open source community and has also been officially recommended by 06076ab16bfd9d.

In this article, we focus on introducing Jest , which is also the foundation of React unit test.

You can run npx jest --init to generate the configuration file jest.config.js

Here is just a list of commonly used configuration items:

Use of command line tools

npm run test at this time: 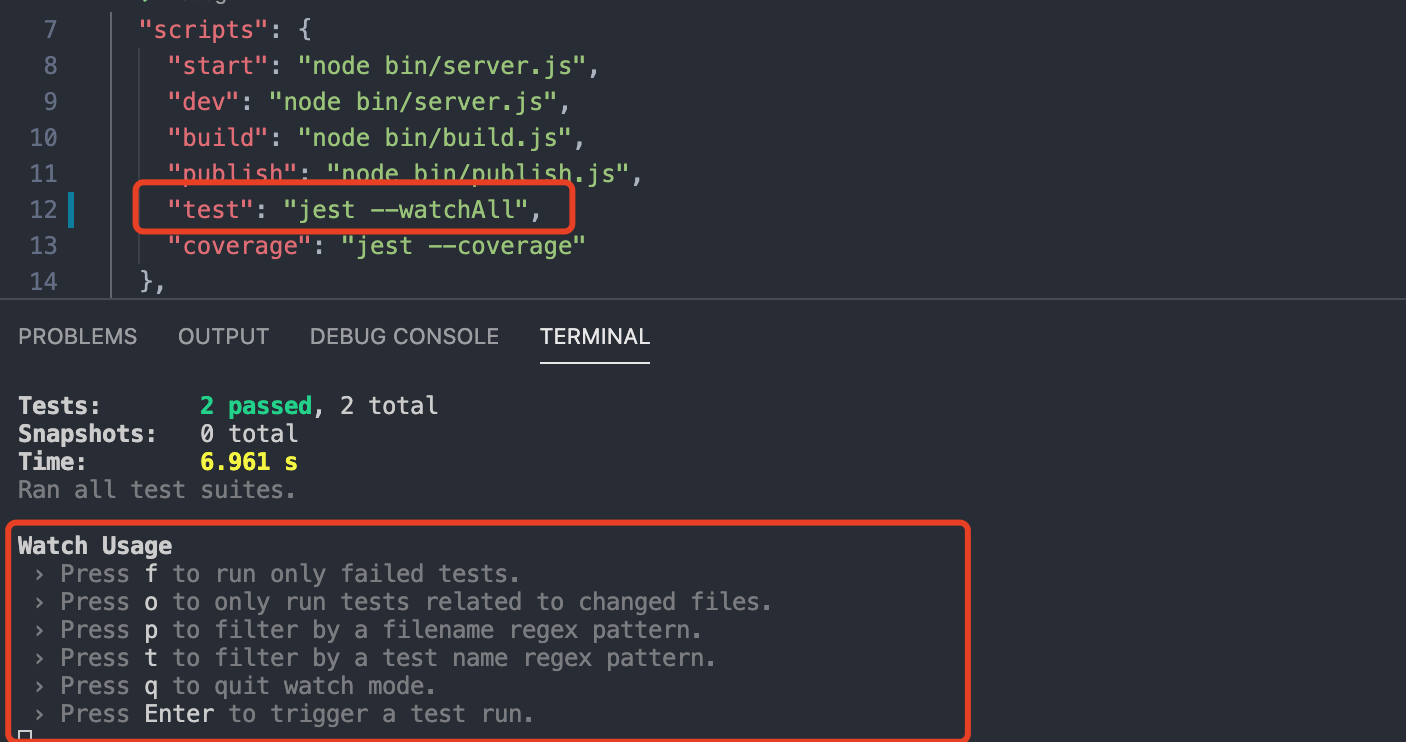 We found the following patterns:

During the test, you can switch to the appropriate mode.

Similar to the life cycle of react or vue, there are four types:

Here, I use a basic demo in the project to demonstrate the specific use:

By adding 1 to the first test case, number is 1. When the second case is subtracted by 1, the result should be 0. However, the interference between the two use cases is not good, which can be Jest by the hook function of 06076ab16c04ed. Modify the test case: 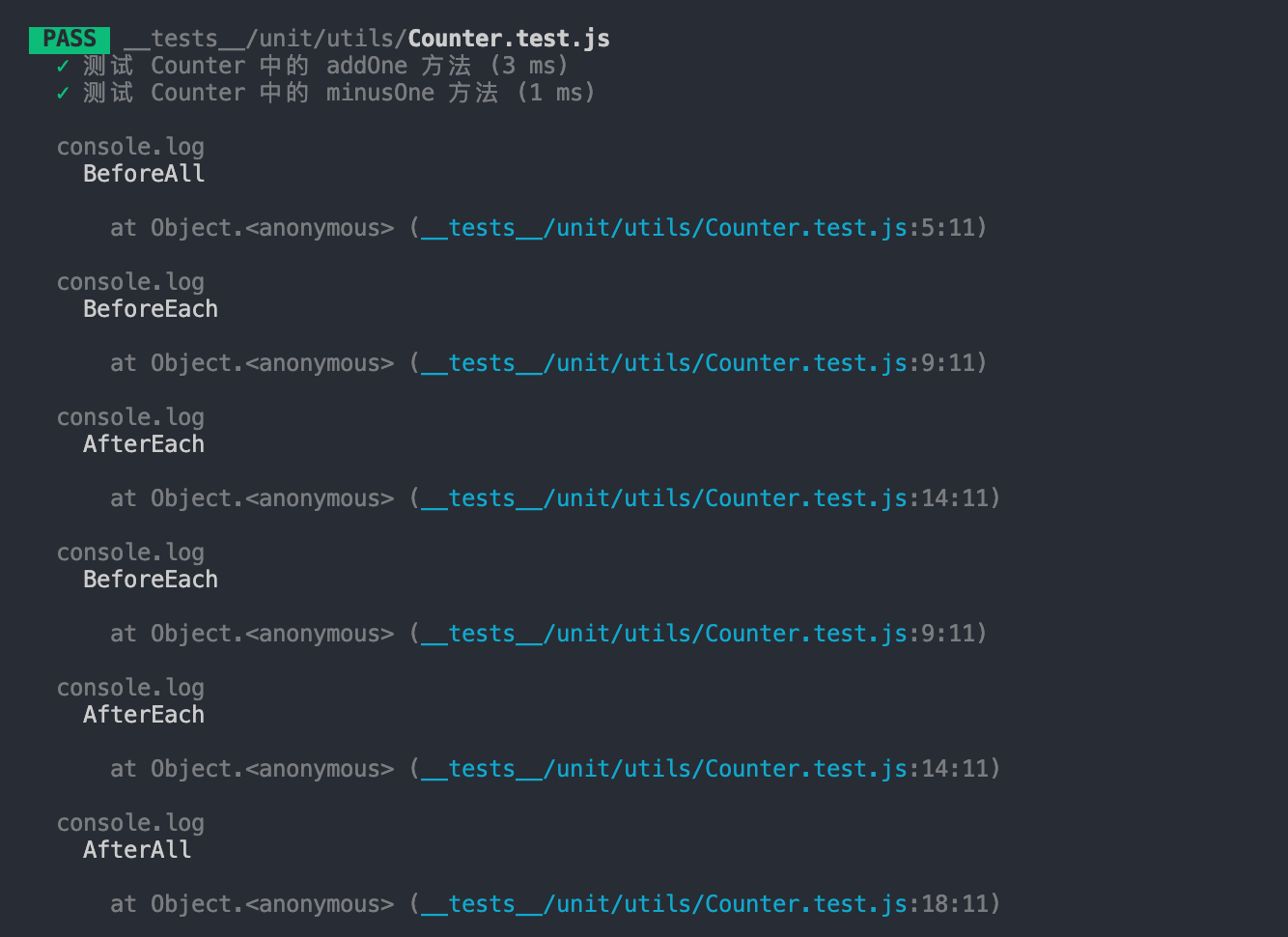 You can clearly see the execution order of the corresponding hooks:

In addition to the above basic knowledge, there are actually asynchronous code testing, Mock, Snapshot snapshot testing, etc., which we will explain in turn in the following React unit test examples.

As we all know, JS is full of asynchronous code.

then what should we do?

When an asynchronous callback function appears in test function, we can pass in a done test function, which is a function type parameter. If the test function is passed in done , jest will wait until done is called before ending the current test case . If done not called, the test will automatically fail the test.

The above code, we have to test function was introduced to done parameters, in fetchData call a callback function done . In this way, the test code executed asynchronously in the callback of fetchData

Obviously, this greatly reduces the efficiency of the test! !

I will not give an example here in detail, students who have this need can refer to Timer Mocks

⚠️ When Promise , be sure to add a return before the assertion, otherwise the test function will end Promise You can use .promises/.rejects to get the returned value, or use the then/catch method for judgment.

If the code used in Promise , it can return Promise to handle asynchronous code, jest will wait for the promise state into resolve will end, if promise is reject , and does not pass the test.

For Promise case, jest also provides a pair of matching symbols resolves/rejects , in fact, just syntactic sugar written above. The above code can be rewritten as:

We know that async/await is Promise the syntactic sugar of 06076ab16c07e3, which can be used to write asynchronous code more elegantly. This kind of syntax is also supported in jest

Let's rewrite the above code:

⚠️ Use async without return , and use try/catch to catch exceptions.

Before introducing jest in mock , let's first think about a question: Why use the mock function?

In a project, a method of a module often calls a method of another module. In unit testing, we may not need to care about the execution process and results of the internally called method, just want to know whether it is called correctly, and even specify the return value of the function. At this time, mock is of great significance.

jest are mainly three mock related to api jest.fn() , jest.mock() , jest.spyOn() . Using them to create the mock function can help us better test some logically complex codes in the project. In our test, we mainly used the following three features provided by mock

Below, I will introduce these three methods and their application in actual testing.

jest.fn() is the easiest way to create the mock function. If the internal implementation of the function is not defined, jest.fn() will return undefined as the return value.

Generally, in real projects, when testing asynchronous functions, the ajax request will not be sent to request this interface. Why?

For example, there are 1w interfaces to be tested, and each interface requires 3s to return. To test all interfaces, 30000s required, so the time for this automated test is too slow

As the front-end, we only need to confirm that the asynchronous request is sent successfully. As for the content returned by the back-end interface, we will not test it. This is what the back-end automated test needs to do.

jest.mock('axios') the top of the test case, and we let jest axios so that it would not request real data. Then axios.get is called, it will not actually request this interface, but will use our {data: ['Cosen','Forest','Cosen']} to simulate the result of the successful request.

Of course, it takes time to simulate asynchronous requests. If there are many requests, it will take a long time. At this time, you can mock data in the local 06076ab16c0a83 and create a new folder __mocks__ This method does not need to simulate axios , but a direct local simulation method, which is also a more commonly used method, which will not be explained here.

The so-called snapshot is also a snapshot. Usually involving automated testing of UI, the idea is to take a snapshot of the standard state at a certain moment.

When using toMatchSnapshot , Jest will render the component and create its snapshot file. This snapshot file contains the entire structure of the rendered component and should be submitted to the code base along with the test file itself. When we run the snapshot test again, Jest will compare the new snapshot with the old snapshot. If the two are inconsistent, the test will fail, which helps us ensure that the user interface does not change unexpectedly.

Here, some basic background on the front of unit testing and Jest based api will introduce over the next article, I will combine a project React component to explain how to do component unit testing.