Since 2017, Vipshop has built a high-performance, stable, reliable, and easy-to-use real-time computing platform based on k8s to support the smooth operation of Vipshop's internal business in normal times and on major promotions. The current platform supports mainstream frameworks such as Flink, Spark, and Storm. This article mainly shares Flink's containerization practice application and productization experience. content include:

The platform currently has two remote computer rooms and two clusters, with more than 2,000 physical machine nodes, and uses k8s namespaces, labels and taints to achieve business isolation and preliminary computing load isolation. There are currently about 1,000 online real-time applications, and the platform recently mainly supports the launch of Flink SQL tasks.

The top layer is the application layer of each business.

The figure above is the containerized architecture of the real-time platform Flink. Flink containerization is deployed based on the standalone mode.

In the course of practice, platform work was done in combination with specific scenarios and ease of use considerations.

In the process of application deployment and operation, exceptions will inevitably occur. The following are the strategies used by the platform to ensure the stability of the task after an abnormal situation occurs.

Kafka monitoring is a relatively important part of our task monitoring. The overall monitoring process is as follows.

After the implementation of Flink containerization based on k8s, it facilitates the release of Flink api applications, but it is still not convenient enough for the tasks of Flink SQL. Therefore, the platform provides a more convenient one-stack development platform such as online editing and publishing, SQL management, etc.

The platform's Flink SQL solution is shown in the figure above, and the task publishing system is completely decoupled from the metadata management system.

In the course of practice, combined with the consideration of ease of use, the platformization work was done. The main operation interface is shown in the following figure: 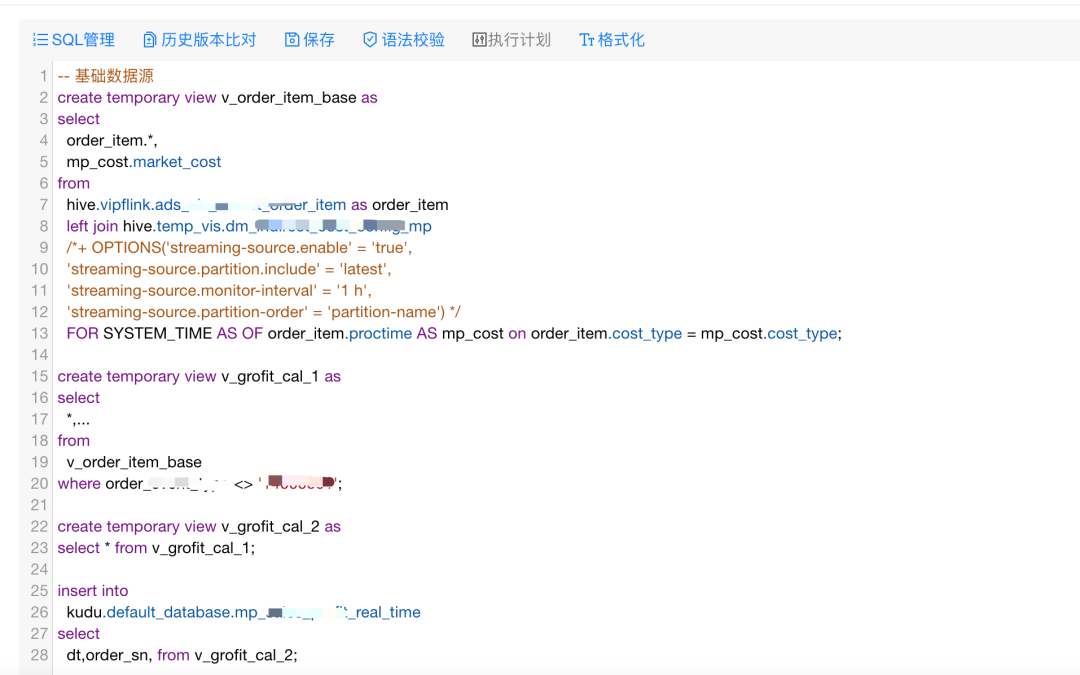 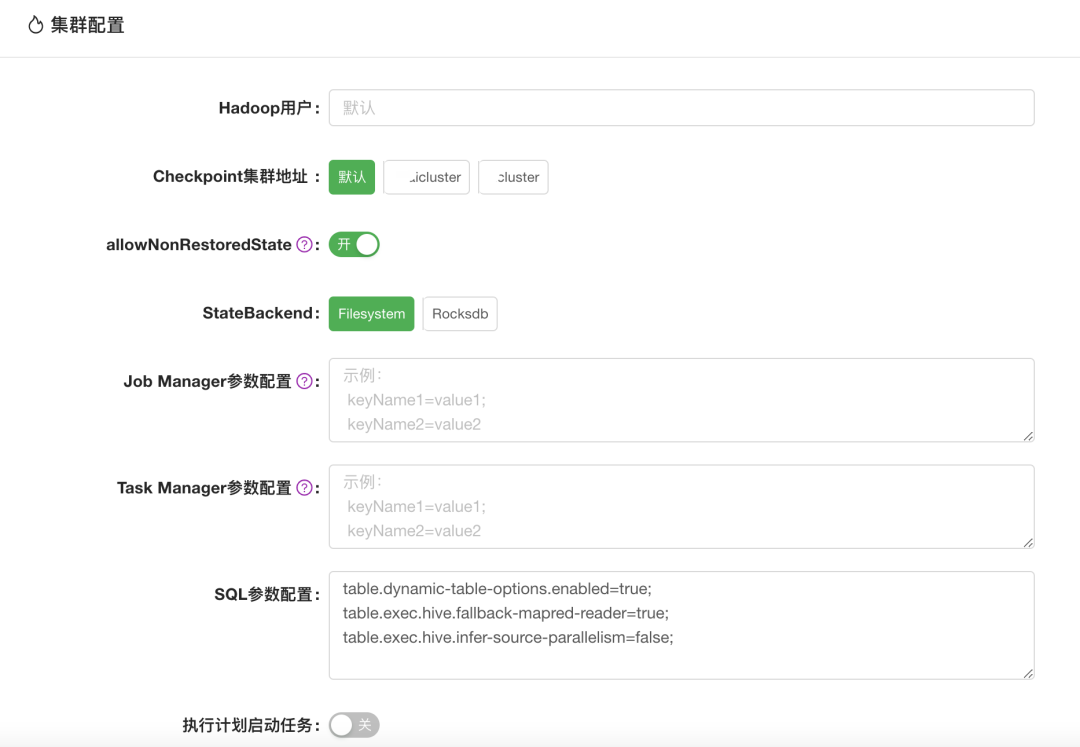 Before 1.11, the platform built its own metadata management system UDM, MySQL stored kafka, redis and other schemas, and opened up Flink and UDM through custom catalogs to achieve metadata management. After 1.11, Flink integrated hive gradually improved, and the platform restructured the FlinkSQL framework. By deploying a SQL-gateway service service, the SQL-client jar package maintained by itself was called in the middle to connect with offline metadata, realizing the unification of real-time offline metadata. , Do a good job for the subsequent flow batch integration. The Flink table operation interface created in the metadata management system is shown below. The metadata of the Flink table is created and persisted in hive. When Flink SQL is started, the table schema information of the corresponding table is read from hive. 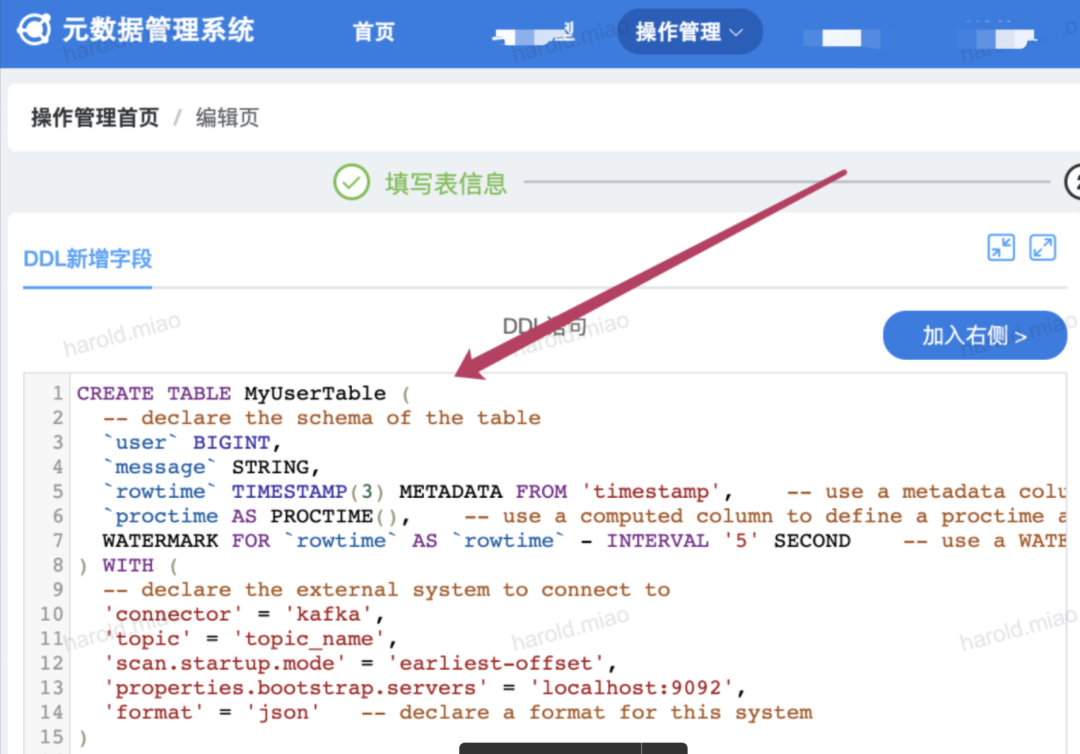 The platform integrates and develops connectors that are natively supported or not supported by the official platform, and decouples mirroring and connector, format and other related dependencies, allowing quick updates and iterations. 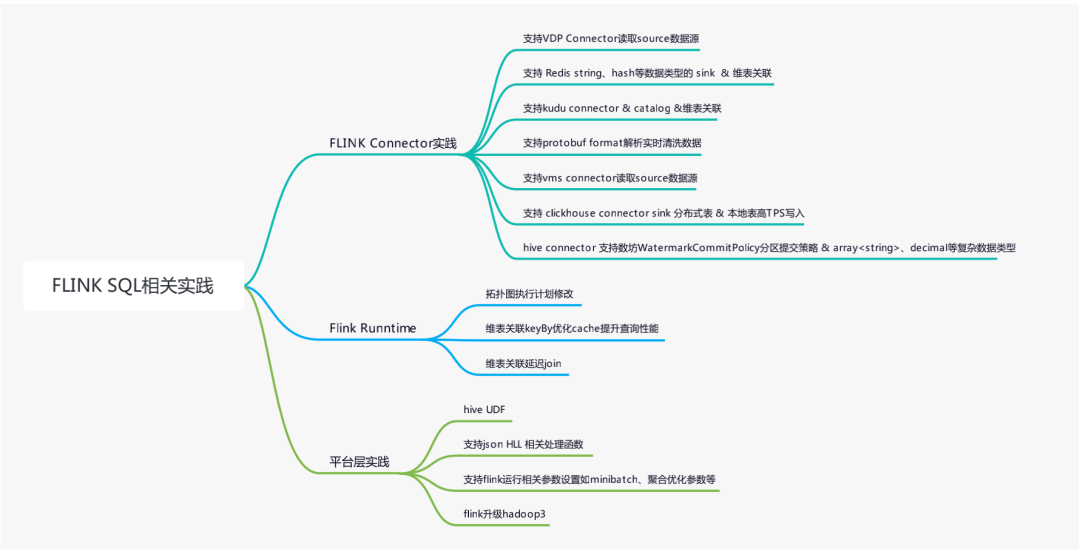 For the situation of dimension table association, in order to reduce the number of IO requests and reduce the pressure of reading the dimension table database, thereby reducing latency and improving throughput, there are several measures:

Before optimization, the dimension table associates the LookupJoin operator and the normal operator chain together.

The lookupJoin operator and the normal operator are not chained together in the dimension table association between optimizations, and the join key is used as the key of the hash strategy. After optimization in this way, for example, the original dimension table with 3000W data volume and 10 TM nodes, each node needs to cache 3000W data, and a total of 3000W * 10 = 300 million is needed. After optimization by keyBy, each TM node only needs to cache 3000W / 10 = 300W of data, and the total cached data is only 3000W, which greatly reduces the amount of cached data.

The simplest way is to set the number of retries and retry interval in the function associated with the dimension table. This method will increase the delay of the entire stream, but the problem can be solved if the mainstream qps is not high.

Increase the operator of delayed join. When the join dimension table is not associated, it is cached first, and the delayed join is performed according to the set number of retries and retry interval.

After adopting the Flink SQL unified warehousing solution, we can obtain benefits: it can solve the unstable problem of the previous Flume solution, and users can self-service warehousing, which greatly reduces the maintenance cost of warehousing tasks. Improved the timeliness of offline warehouses, from hourly level to 5min granularity warehousing.

In the past, the index calculation usually adopted the Storm method, which required customized development through API. After adopting this Flink solution, we can get the benefits: cutting the calculation logic to Flink SQL, reducing the rapid change of the calculation task caliber, and the slow modification of the online cycle. Switching to Flink SQL can make quick modifications, go online quickly, and reduce maintenance costs.

Based on Flink's powerful streaming ETL capabilities, we can do data access and data conversion in the real-time layer in a unified manner, and then return the detailed layer data to the offline data warehouse.

We introduce the HyperLogLog (hereinafter referred to as HLL) used by presto into the Spark UDAF function to open up the intercommunication of HLL objects between Spark SQL and presto engines. For example, the HLL objects generated by Spark SQL through the prepare function can not only be used in Spark Merge query in SQL and merge query in presto. The specific process is as follows:

Step 2: Spark SQL merges the HLL objects of the goods\_id dimension into the brand dimension

Step 3: Spark SQL query the UV of the brand dimension

Therefore, based on the architecture of real-time offline integrated ETL data integration, the benefits we can obtain:

After operations such as data cleaning, analysis, and expansion in Kafka through Flink SQL, the product attributes are associated through the redis dimension table, written to clickhouse through the distributed table, and then queried through the data service adhoc. The business data flow is as follows: 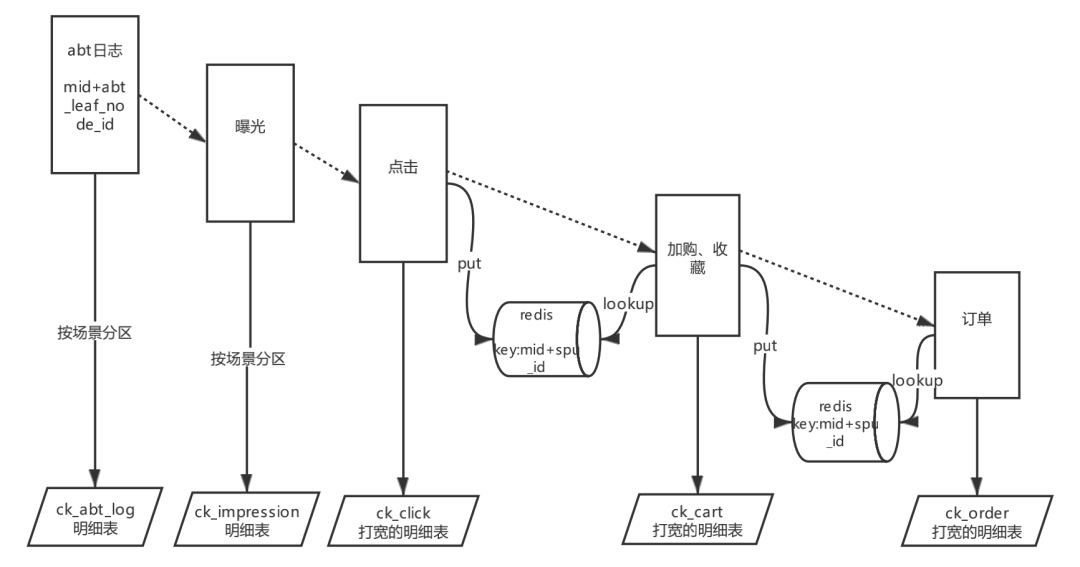 Through the Flink SQL redis connector, we support the redis sink and source dimension table association operations, which can easily read and write redis, realize the dimension table association, and the cache can be configured in the dimension table association, which greatly improves the TPS of the application. Realize the pipeline of real-time data flow through Flink SQL, finally sink the large wide table into CK, and store murmurHash3\_64 according to a certain field granularity to ensure that the data of the same user is stored in the same shard node group, thereby making the ck large table The join between becomes a join between local tables, which reduces data shuffle operations and improves join query efficiency.

5.1 Improve the usability of Flink SQL

At present, our Flink SQL debugging is very inconvenient. For offline hive users, there are certain thresholds for use, such as manual configuration of kafka monitoring, task pressure measurement and tuning, how can the user's threshold for use be lowered At the lowest point, it is a relatively big challenge. In the future, we will consider doing some intelligent monitoring to inform users of problems in the current task, automate as much as possible and give users some optimization suggestions.

At present, our VDP binlog message stream is written to the hive ods layer through Flink SQL to speed up the preparation time of the ods layer data source, but it will generate a large number of duplicate messages to de-duplicate and merge. We will consider Flink + Data Lake's cdc warehousing plan for incremental warehousing. In addition, the Kafka message flow after order widening and aggregation results require very strong real-time upsert capabilities. At present, we mainly use kudu, but the kudu cluster is relatively independent and small, and the maintenance cost is high. We will investigate the data lake Incremental upsert capability to replace the kudu incremental upsert scenario.

For more Flink-related technical questions, you can scan the code to join the community DingTalk exchange group~ 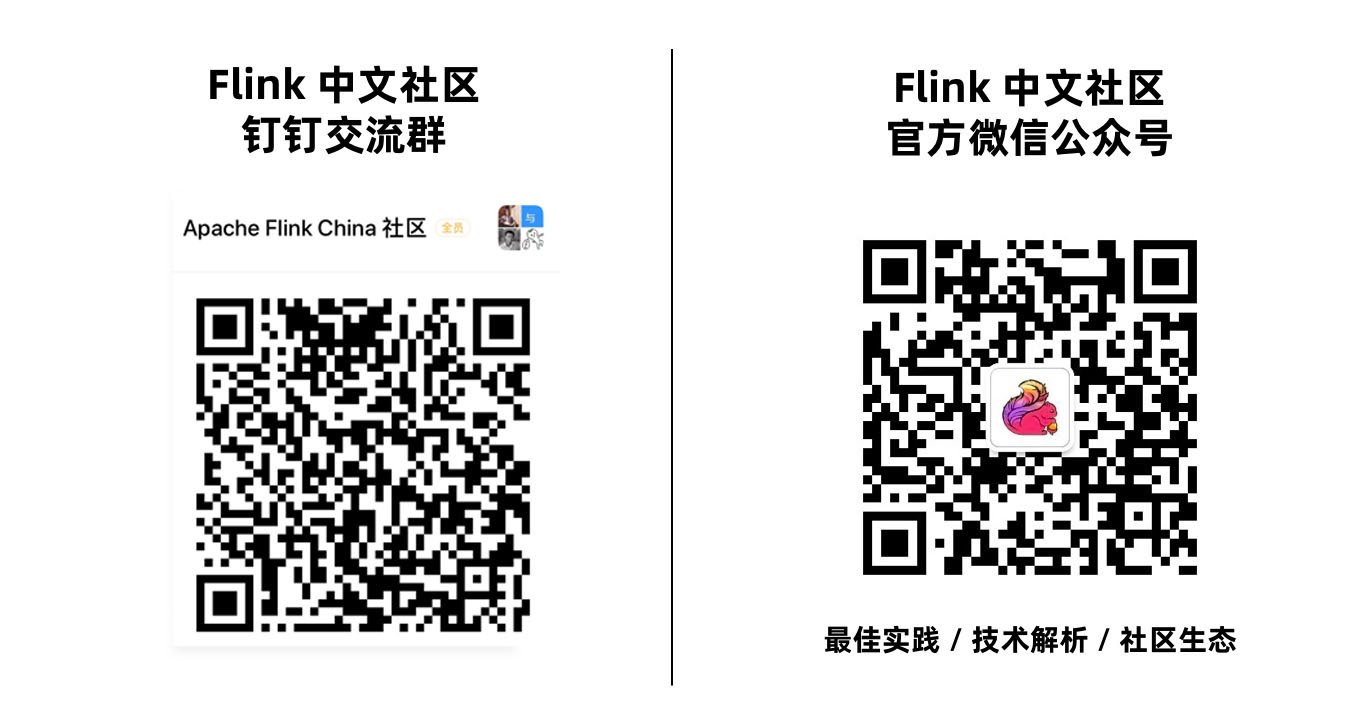 You can experience the real-time computing Flink version of Alibaba Cloud's enterprise-level product based on Apache Flink for only 99 yuan! Click the link below to learn about the event details: https://www.aliyun.com/product/bigdata/sc?utm\_content=g\_1000250506 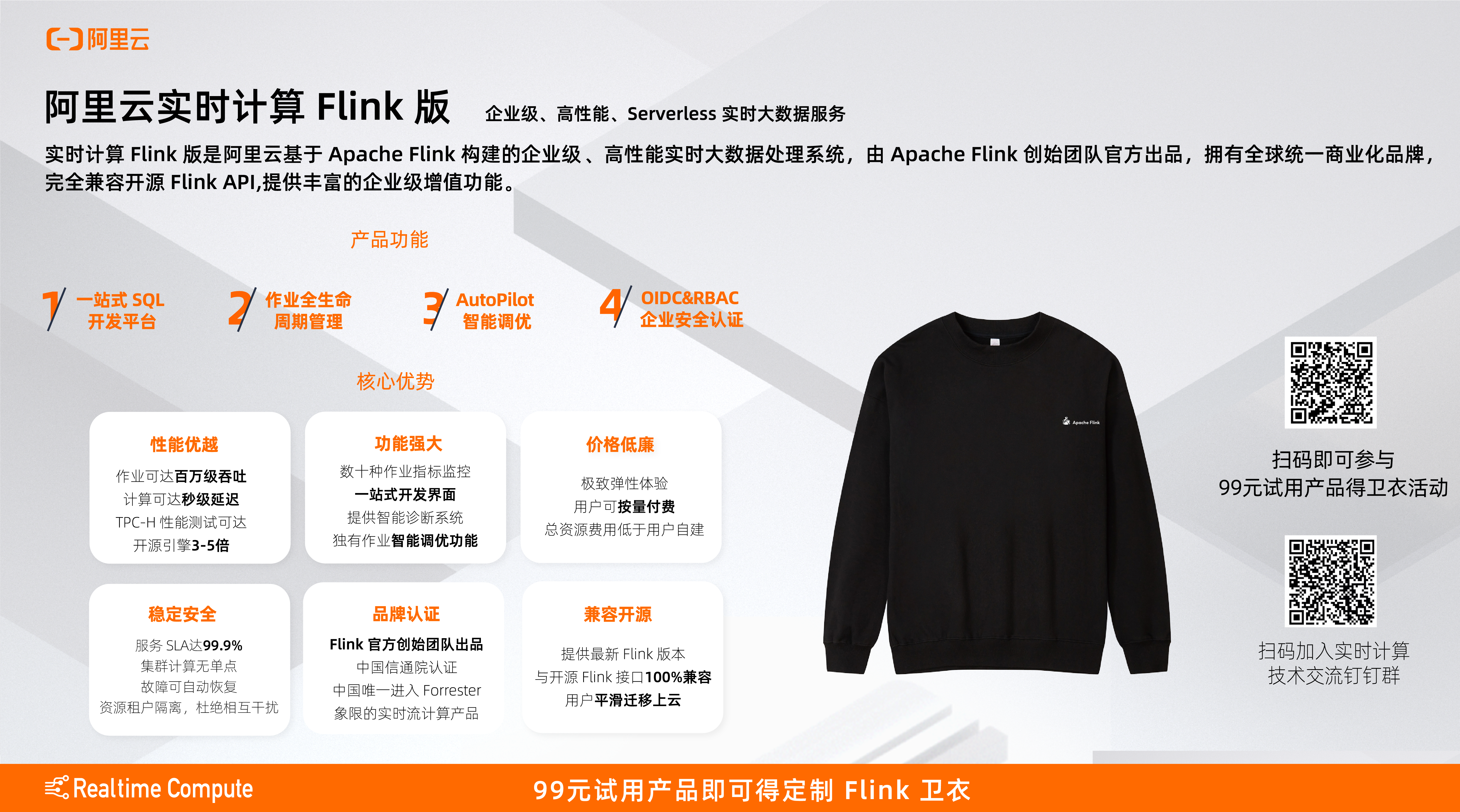