It is said that 99% of people don’t know that vue-devtools can open the corresponding component files directly? Reveal the principle of this article

Hello, my name is , WeChat search Vision" 160a0d7943d258 Follow me, focus on front-end technology sharing, a vision is to help the front-end to broaden its horizons to the forefront of the public account within 5 years. Welcome to add me on WeChat ruochuan12 for long-term exchange and learning.

warehouse address of this article is : git clone https://github.com/lxchuan12/open-in-editor.git , the best way to read this article, clone the warehouse and debug by yourself, easy to absorb and digest.

If someone talks about how to read the source code, if you are reading the article, you can recommend my source code series article, it is really not reporting 160a0d7943d338.

My article is written as far as possible so that readers who want to read the source code but don't know how to read it can understand. I always recommend using build the environment breakpoint debugging source code to learn , where does not point , watching while debugging, instead of just looking at . As the goes: 160a0d7943d364 It is better to teach people to fish than to teach people to fish .

After reading this article, you will learn:

1.1 Scenarios where the source file corresponding to the page cannot be found for a short time

I don’t know if you have encountered such a scene. When you open a page developed by yourself (or your colleague), it is difficult to find the corresponding source file in a short time.

At this time, you may want to have click the page button to automatically use the editor to open the corresponding file function, that would be great.

And vue-devtools provides such a function, maybe you don't know. I don’t think a lot of people know it, because many people don’t use vue-devtools .

You may ask, I don’t use vue . I use react Is there a similar function? Yes, please see react-dev-inspector . You might also ask, what editor supports Yeah, mainstream vscode、webstorm、atom、sublime are all supported, you can see more this list Editors Supported .

This article is based on learning the launch-editor source code, which knowing it, knowing why , and exploring the vue-devtools "open component in editor" function.

1.2 Briefly describe its principle in one sentence

1.3 The error resolution of the component that cannot be opened when the editor is opened

When you actually use this function, you may encounter an error saying that the file cannot be opened.

1.3.1 Method 1: First make sure that the editor you use can be opened with a command in the terminal. The article takes VSCode as an example

If your command line itself cannot run code such as 060a0d7943d658 to open the editor, it must be an error. At this time, you need to VSCode into the command line terminal.
The injection method is also simple. A small partner in my communication group provided a screenshot of mac

mac computer is VSCode command + shift + p , Windows is ctrl + shift + p . Then enter shell and choose to install code . As shown below:

So you can open VSCode in the terminal.

If you can open it in the terminal and use the command editor to open it, but it still reports an error, then there is a high probability that your editor is not recognized.
Then you can set the designated editor through method two.

In vue project, the corresponding article is: vue3-project , add the .env.delelopment file, and its content is EDITOR=code . highlights here under my vue-cli version 4.5.12 , as if vue-cli 3.5 above and only supports custom EDITOR this environment variable .

There is no need to specify the corresponding path of the editor ( c/Users/lxchu/AppData/Local/Programs/Microsoft VS Code/bin/code ), because an error will be reported. Why do I get an error, because I read the source code and tried it. Because it will be truncated according to the space and become c/Users/lxchu/AppData/Local/Programs/Microsoft , of course an error will be reported.

If you pass the above methods, the error reporting problem has not been resolved. Welcome to leave a message, or add me to ruochuan12 communicate. After all, the computer environment is different, it is difficult to ensure that everyone can perform normally, but we know the principle, it is easy to solve the problem .

Next, we explore the implementation principle of the "open component in editor" function from the source code point of view.

Before exploring the principle, let's take a look at the official document of vue-devtools

This guide writes that Vue CLI 3 is out of the box in .

It also wrote in detail how to use Webpack

It also wrote how to use Node.js

You can use the launch-editor package to setup an HTTP route with the /__open-in-editor path. It will receive file as an URL variable.

For more information, see this guide .

Readers who are familiar with me all know that I am recommended for debugging to look at the source code , as the goes: 160a0d7943d975 does not point where . And debugging is generally written in great detail, hoping to help some people know how to read the source code. So I specially built a new warehouse open-in-editor git clone https://github.com/lxchuan12/open-in-editor.git for everyone to clone and learn.

vue3-project/package.json has a debug button.

Let's search for 'launch-editor-middleware' . Generally speaking node_modules cannot be searched, and need to be set. Of course there is also a simple way. That is, there is a setting icon on the right side of "Excluded files" "Use "Troubleshooting settings" and "Ignore files"", click down.

I won’t repeat the rest. You can read this answer: 160a0d7943da40 How to set vscode to search for files contained in node_modules?

At this time, this middleware vue3-project/node_modules/@vue/cli-service/lib/commands/serve.js

4. vue-devtools out of the box with specific source code implementation

Next, let's look at the specific source code implementation Vue CLI 3 out of the box.

When you click on vue-devtools , there will be a request, http://localhost:8080/__open-in-editor?file=src/App.vue , and the component will be opened without accident.

When looking at the source code, first look at the debug screenshot. 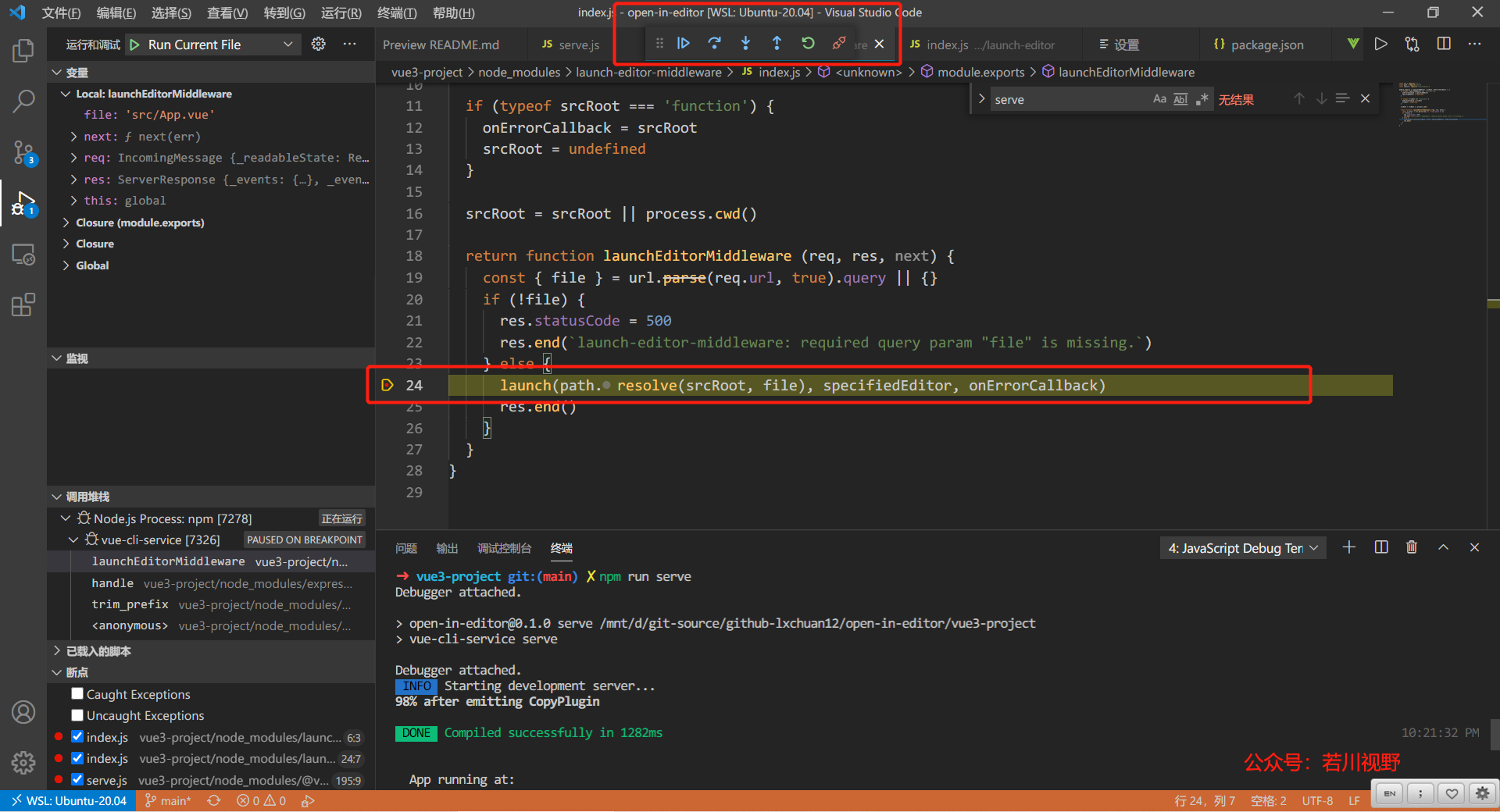 previous paragraph of 160a0d7943db71, this way of switching parameters is very common in many source codes. In order to facilitate the user to pass parameters when calling. Although there are multiple parameters, one or two can be passed.

You can set a breakpoint according to the situation. For example, here I will break launch(path.resolve(srcRoot, file), specifiedEditor, onErrorCallback)

Following the breakpoints, I came to the launchEditor function.

I believe that readers can understand, I come alone to tell, mainly because this form wrapped in many functions in the source code are common .

This is the code position output by the Could not open App.vue in the editor. at the beginning of the article.

6.2 guessEditor guess the editor currently in use

This function mainly does the following four things:

You don't need to look at the following code carefully, just look at it carefully when debugging.

In this large segment, the main thing is following code , using the sub-process module. Simply put, the subprocess module has the ability to execute commands.

At this point in the writing, it is basically close to the end. The principle is actually to use nodejs in child_process to execute a command code path/to/file

Here is a summary: First of all, at the beginning of the article, it proposes "the scenario where the source file corresponding to the page cannot be found in a short time", and gives a solution to the error situation that is easy to encounter.
Secondly, configure the debug learning environment along with the vue-devtools especially the capital used in yyx990803 / Launch Editor- .

7.1 Briefly describe its principle in one sentence

Let's review the content of the principle at the beginning.

What can be done in the end.

You can look at umijs/launch-editor and react-dev-utils/launchEditor.js . Their codes are almost similar.

You can also use Node.js do some work such as improving development efficiency, and you can learn child_process and other modules at the same time.

also don't imprison your own thinking, imprison the front end in the page, you should broaden your field of vision .

If readers find something wrong or can be improved, or if there is no clear place, please comment and point out. In addition, I feel that it is well written, and it is a little helpful to you. You can like, comment, forward and share. It is also a kind of support for me. Thank you very much. If you can pay attention to my front-end public Vision" 160a0d7943df33, it would be better.

Hello, I’m , WeChat search Vision" 160a0d7943df8e Follow me, focus on front-end technology sharing, a vision is to help the front-end to broaden its horizons to the forefront of the public account within 5 years. Welcome to add me on WeChat ruochuan12 for long-term exchange and learning.
There are mainly the following series of articles: learning source code overall architecture series , annual summary , JS basic series