As we all know, JS is a single-threaded language, but browsers can handle asynchronous requests well, so why?

The execution environment of JS is generally browser and Node.js, the two are slightly different, here we only discuss the situation in the browser environment.

The tasks in the task queue are also divided into two types, namely: Macro-take and Micro-take

Execution of the task queue is: to execute a macro task , during execution if the output of the new macro / micro tasks, it will push them into the corresponding task queue, in the implementation of a micro-task team after , after again Execute the macro task, and so on. repeated process above 1609e35142389f is called Event Loop .

Each cycle operation is called tick . 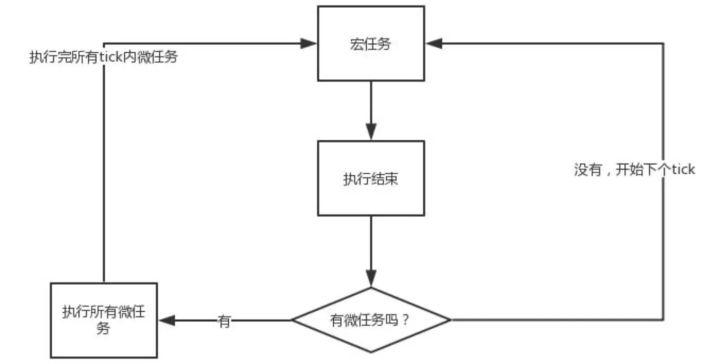 Understand the execution process of micro tasks and macro tasks

According to the above content, analyze the execution steps:

new Promise(..) is also a synchronous code and will be executed immediately. Only then the code executed asynchronously, which is a micro task.

Async and await are actually syntactic sugar for Generator and Promise.

The async function is no different from the normal function, it just means that there is an asynchronous operation method in this function and returns a Promise object

The translation is actually:

Look at the example:

"Task Queue" is an event queue (can also be understood as a message queue). When an IO device completes a task, an event is added to the "Task Queue" to indicate that the related asynchronous task can enter the "execution stack" . The main thread reads the "task queue", which is to read what events are in it.

In addition to the events of the IO device, the events in the "task queue" also include some user-generated events (such as mouse clicks, page scrolling, etc.). As long as the callback function is specified, these events will enter the "task queue" and wait for the main thread to read.

---- Execute immediately when there is no code in JavaScript, it is executed as soon as possible when the process is idle

From the above, we already know that setTimeout is a macro task, which will be added to the macro task queue and executed in order, if there is one before it.

setTimeout() is to tell JavaScript how long to add the current task to the queue.

Look at the code:

Because then is a micro task, it will be executed before setTimeout, so although setTimeout is a macro task added after two seconds, because the while operation in then was delayed by 4s, it was delayed until 4s before execution. setTimeout.

So the order of output is: script start, promise, script end, then1.
Output after four seconds: while, timeout

Note: What should be added about setTimeout is that even if the main thread is empty, 0 milliseconds is actually not reachable. According to HTML standards, the minimum is 4 milliseconds. Interested students can find out for themselves.

There is a small tip: from the specification, microtask is executed prior to task, so if there is logic that needs to be executed first, it will be executed earlier than task in the microtask queue.

Finally, remember that JavaScript is a single-threaded language, and asynchronous operations are placed in the event loop queue, waiting for the main execution stack to execute, and there is no dedicated asynchronous execution thread.