Flutter or React Native? Who is the best choice for building mobile applications in 2021?

Planning for responsive development in 2021? But not sure which technology you should choose to develop your application quickly, but also to reduce costs? If the answer to both questions is yes, then you have two main choices: Flutter or React Native!

But again, which technology is the best choice for cross-platform application development is still a headache for you!

Although there is a lot of information on the Internet that can explain the basic knowledge, pros and cons of each technology. But how will you compare all these advantages and disadvantages to decide which technology is best for your application development needs?

Through the experience of using these two technologies, I can help you distinguish between the two most popular and commonly used technologies when building cross-platform mobile applications.

It is 2021, and the impact of the pandemic has caused a surge in demand for mobile applications.

Enterprises urgently need to create a fast mobile application in order to provide individual customers with comprehensive and customized solutions, which prompts them to look for cross-platform application development solutions. But why not the native iOS and Android apps?

Before you go directly to the comparison between Flutter and React Native, it is worth knowing that these two frameworks are both the first choice for building cross-platform mobile applications. But sometimes making the right decision is subject to the perspective of the enterprise.

So here are some important parameters that I choose to compare:

Let's start one by one and understand each point in detail!

1. Flutter VS React Native: Who supports it?

Conclusion: Both of these frameworks were created and supported by the largest technology giants in the industry, Google and Facebook, so they will continue to exist in the future.

Google’s baby, Flutter, launched in 2017, is an advanced application software development kit (SDK) composed of all gadgets and tools to make your development process easier and simpler. A wide selection of widgets allows developers to build and deploy visually appealing, natively compiled applications for multiple platforms (including mobile, web, and desktop) in a simple way, using a single code Library. Therefore, Flutter application development companies have a better chance to ensure that you have faster, faster and reliable application development solutions. But to what extent is this statement true? Let's use its characteristics to evaluate it.

The following are the quick selling points of Flutter:

Let's take a quick look at the features of React Native:

Conclusion: When summarizing the best cross-platform mobile application development framework used by global software development companies in 2019 and 2020, the result is that 42% of developers are more willing to stay in React Native, while 39% of developers choose Flutter .

But different market reports have different statistics. But before you start hiring app developers, it is necessary to evaluate real market data in order to make an informed decision.

Market Trend 2: According to Google Trends , in the past 12 months, Flutter has led the market and defeated React Native. 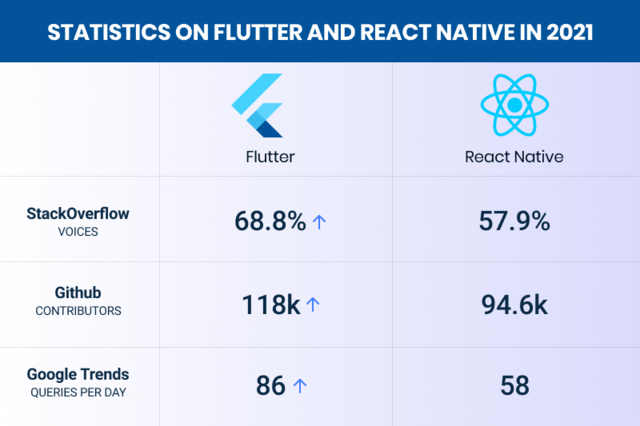 3. Flutter VS React Native: the most loved and popular framework

Conclusion: Both are young cross-platform application development frameworks, supported by Google and Facebook, and both will become more and more popular as time goes by. But if you consider the same Github repository survey in 2019, Flutter has already gained momentum with 1.18 million stars surpassing React Native with 94.6k stars. 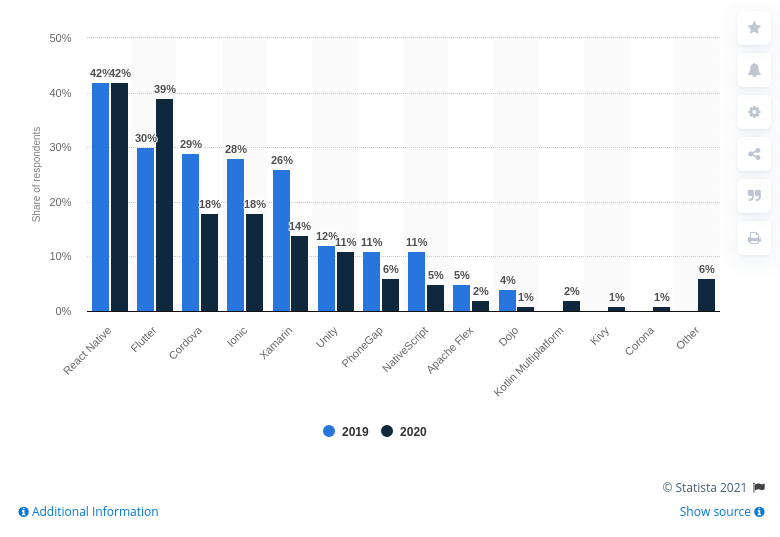 4. Flutter VS React Native：Dart VS JavaScript

Conclusion: Flutter is based on Dart, and the JavaScript used by React Native has dominated the IT industry for a long time and plays an important role in the back-end development process. But this does not mean that you underestimate the programming language of Flutter. Let's learn it!

Flutter Vs React Native, which is the best mobile app development in 2021? This is one of the most common problems among developers. The choice of framework mainly depends on the programming language on which the technology is based, because you need to further evaluate the complexity or flexibility of the programming language in order to continue to use it.

Secondly, the language is 2 times faster than JavaScript and has an advanced (AOT) and just-in-time (JIT) compiler. In the case of flutter, you need to hire application developers who are familiar with Java or C++. But from another perspective, JavaScript is one of the most popular languages in the developer community for React Native mobile app development. Therefore, if anyone already knows JavaScript, they can easily learn React and start developing applications.

Conclusion: If technically speaking, Flutter is an advanced SDK, it provides a layered architecture to ensure a high degree of customization, where React Native relies on other software to build reactive components and uses JavaScript to connect local modules. Even with minor changes, bridging can affect performance, and Flutter can manage everything without bridging.

Flutter has a layered architecture, paving the way for easy and fast UI customization. It is believed that it allows you to fully control every pixel on the screen and enables mobile application development companies to integrate overlays and animated graphics, text, video, and controls without limitation.

When comparing the advantages and disadvantages of Flutter Vs React Native, performance and technical architecture are the biggest issues for organizations to evaluate business growth and further scalability of applications.

Conclusion: When questioning yourself which framework is right for you, then performance may be your biggest decision-making driver in 2021. When comparing the performance of frameworks, Flutter has an advantage over React Native.

In terms of technology, Flutter is compiled into ARM or x86 native libraries, which makes it faster and adds an advantage. On the other hand, React Native has not been compiled to native code and still has a JavaScript layer, which makes its performance lower than Flutter.

7. Flutter VS React Native: Ease of adoption and community support

Conclusion: When it comes to building enterprise applications, community support is a factor that must be checked. Both React Native and Flutter have developed in the industry for many years and have the latest technological updates.

With each incremental version and technology update, the community's interest and demand for the framework gradually increase. Let us understand the situation of these two frameworks in terms of community participation.

React Native was launched in 2015, and its community has been in a growing stage, as evidenced by the number of contributors to the framework on Github. However, even though Flutter is still very young and relatively new, it is rapidly occupying the industry.

Conclusion: Since Flutter has its own set of UI components and gadgets, while React Native only provides a basic gadget box, Flutter provides better UI customization and makes it consistent across platforms.

Since the launch of the framework, Flutter has been known for its beautiful widgets similar to native ones. These widgets are rendered and managed by the framework's graphics engine.

In addition, its design supports Material Design and is ready to use out of the box. All you need to do is hire application developers who have excellent skills in using Flutter and can easily customize the needs of the project with pre-made widgets to create most views.

On the other hand, React Native provides basic tools to adapt to the platform, such as buttons, sliders, loading indicators, etc. But React Native has many third-party components that can help you customize the UI of your application.

Conclusion: No matter how good the application you develop, to make it run smoothly and continuously, it must be upgraded and debugged. Compared with Flutter, maintaining code with React Native is really difficult.

In React Native, when you fork the code to adapt to your application, it interferes with the logic of the framework and slows down the development process. In addition, in React Native applications, most native components have third-party library dependencies, so maintaining those outdated libraries is indeed a difficult task.

In the case of Flutter, because the simplicity of the code makes it easier for mobile application developers to find problems, find external tools and support third-party libraries, it is much easier to maintain the code.

Conclusion: Whether you are a startup or a leading entrepreneur, the hourly cost of a developer is always your top concern. So when you choose to hire a local development company or Flutter application engineer, you may want to know their rates, and different locations will provide you with different hourly rates. Let us check!

When hiring application developers, whether it is Flutter or React Native, many factors need to be considered, such as experience, expertise, project handling, etc., to evaluate the actual hourly cost of the developer.

When recruiting application developers, whether it is Flutter or React Native, many factors need to be considered, such as experience, professional knowledge, project handling, etc., in order to evaluate the actual hourly cost of the developer. But among all these factors, the location of the developer is the most important factor, which may bring about a huge difference in hourly costs.

If you are still not sure when to choose Flutter or React Native for your development project, then it is best to take a quick look at the chart comparison between Flutter Vs and React Native:

When developing cross-platform applications, Flutter and React Native are both dominant technologies because they both have special features such as real-time refresh or the use of adaptive software to build graphical UI. The choice of framework mainly depends on the needs of the project, and different project types require different advantages. So announcing a winner means surpassing one leading frame and not the other, which really doesn't make any sense.

In addition, you can work with mobile application development companies to analyze project requirements and seek valuable advice from expert programmers before choosing any framework for the project. They bring their best expertise to the project and enable you to build applications using the most suitable method. So don't waste your energy on weighing the framework, because the experts have the best knowledge to implement the appropriate technology according to the needs of the project.

The article was first published on the official account: front-end full-stack developer