The second-generation and third-generation Vue response systems are stronger than one wave. Is the previous wave dead? (under)

Including the most basic method of controlling data response 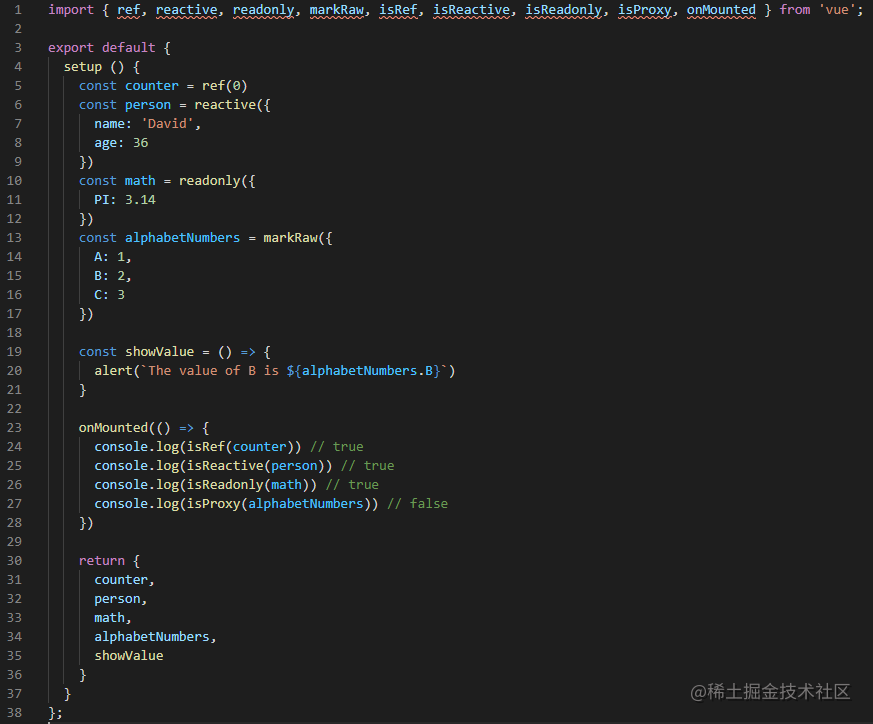 In this example, we explored the use of four basic reactive methods.

1. Create a counterref object with a value of 0. Then place two buttons in the view to increase and decrease the value of the counter. When used, the counter has no effect.

2. Next, create a person response object. Place two input controls in the view, which are used to edit a person's name and a person's age, respectively. It will be updated immediately when we edit the attributes of the staff.

3. Create a math read-only object. Then set a button in the view to double the PI attribute value of math. The object can only be read and cannot be modified.

4. Create an alphabetNumbers object and mark it as raw. Take the first three content. Set a button to change the value of Bproperty to 3. We will find that we can modify the object, but will not cause the view to re-render.

The markRaw method is very suitable for objects that we do not need to respond to, such as a long list of country/region codes, color names and their corresponding hexadecimal numbers, and so on.

5. Test and determine the type of each object we create, and use the lifecycle hook of onMounted() to trigger these checks.

This group contains all four type checkers mentioned above:

This group contains other reference methods:

The methods in this group are ref, reactivity and readonly:

Experience the use of these methods through the following examples: 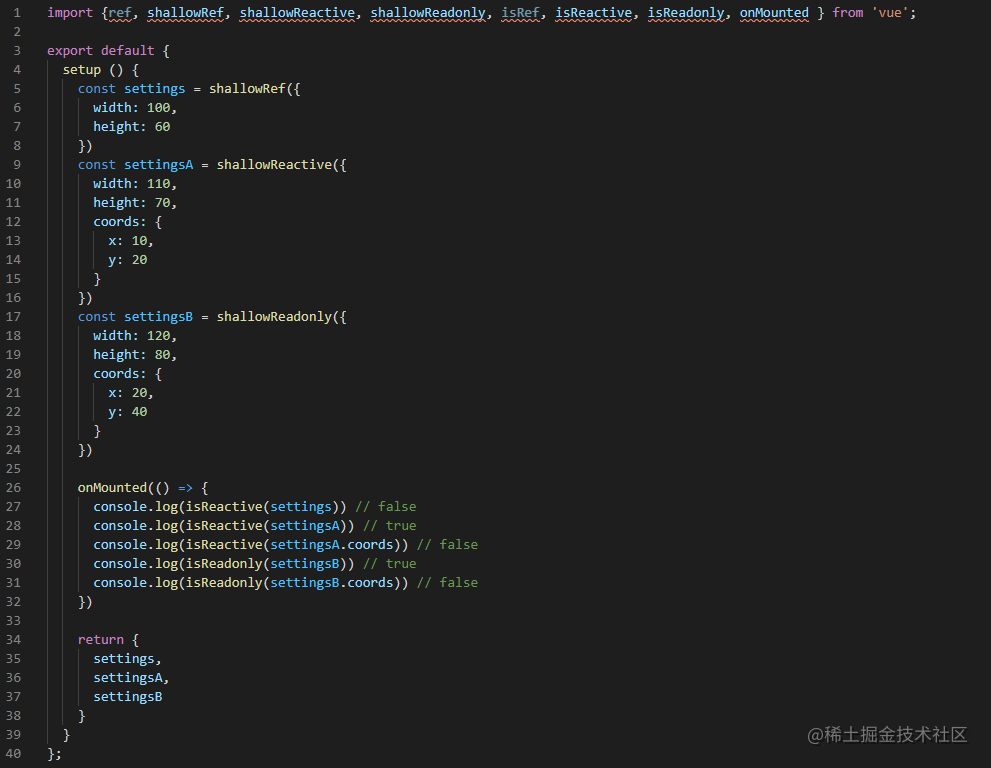 This example starts by creating a shallow reference object for settings, adding two input controls to the view to edit its width and height properties. But this property cannot be modified. To solve this problem, add a button that can change the entire object and all its properties.

Finally, a shallow read-only object of settingsB is created with the same attributes as settingsA. But here the widthorheight attribute is only readable and cannot be modified. The x and y attributes can be modified normally.

The nested object coords in the last two examples are not affected by the conversion, Vue does not track any changes to it, and can be modified freely.

The next three methods are used to convert the proxy into a ref or ordinary object:

In the following example, we will show how these conversions work: 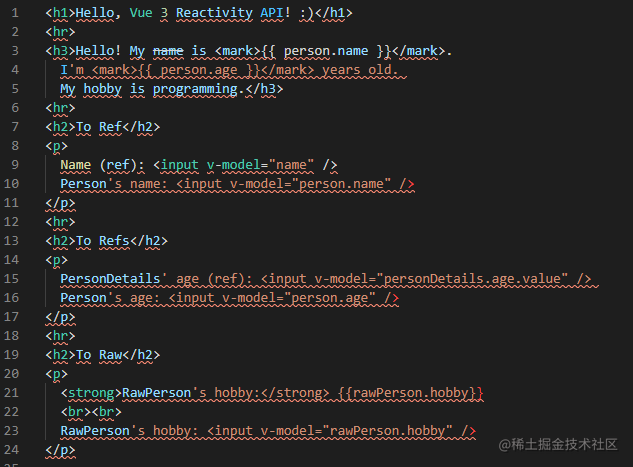 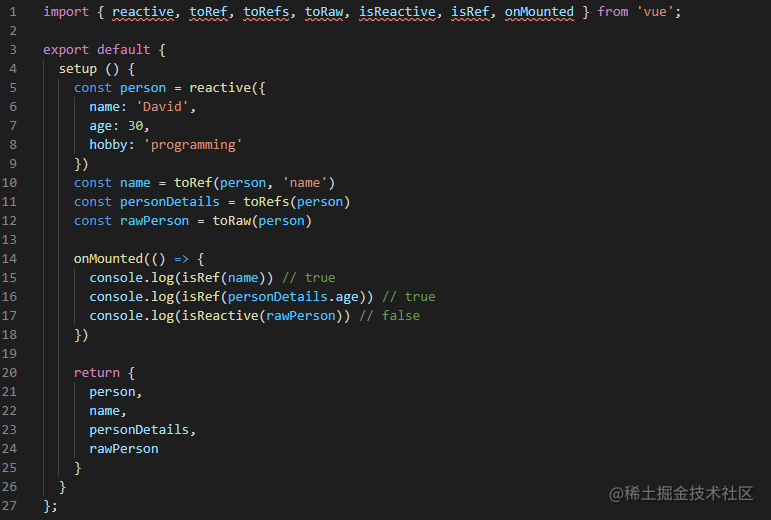 In this example
1. Create a basic person reaction object and use it as the source object.

2. Convert the name property to ref with the same name. Add two input controls to the view-one for name reference and the other for nameproperty. When one of them is modified, the other will also be updated.

4. Convert person responsive objects into rawPerson ordinary objects. Add an input control to the view to edit the hobby property of rawPerson, Vue does not track it.

The last set of methods is used to calculate complex values and monitor certain values:

Let's continue to look at the following example: 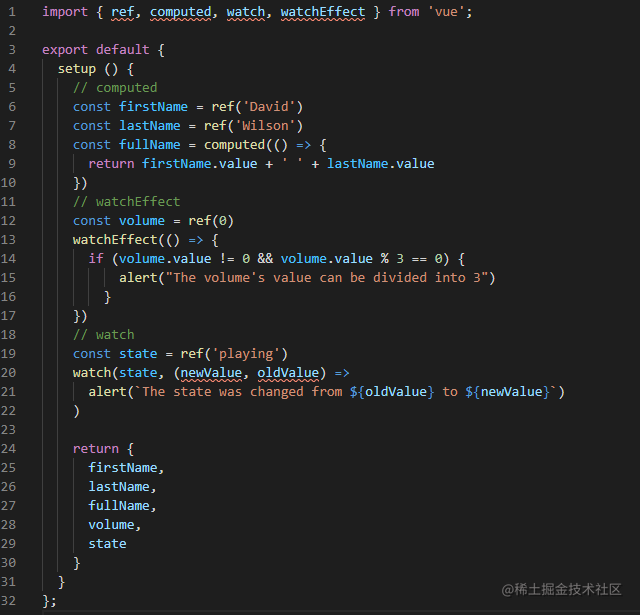 In this example, we have created a fullName calculation variable, which is calculated based on firstName and lastName. Two input controls are added to the view to edit the two parts of the full name. Modifying any part of fullName will recalculate and update the result.

Next, we create a volumeref and set the viewing effect for it, and the callback function will be run every time the volume is modified. To verify that the process is like this, we add a button to the view that doubles the volume. Then set a condition in the callback function to test whether the value of the volume can be divided into three parts. When it returns true, an alert message will be displayed.

Finally, we create a stateref and set a watch function to track its changes. The state changes the execution function. In addition, we added a button to switch the state between playing and paused. If the status is switched, there will be a prompt.

Some differences between watchEffect and watch:

We will find that the Vue 3 reactive API provides many methods for various use cases, and there are many API content. In this tutorial, we only discuss the basics. For more in-depth exploration, details and edge cases, please visit the Reactivity API documentation.

In this article, we introduced what a response system is and how to implement it in Vue 2 and Vue 3. Some of the flaws in Vue 2 have been resolved in Vue 3. Finally, let us summarize the advantages and disadvantages of the Vue3 responsive system.