About Shanghai Flink Meetup shared content, how to build a data lake ecology based on Flink, object storage, and Iceberg.

This article is compiled from "Iceberg and Object Storage to Build a Data Lake Solution" shared by Sun Wei, senior software R&D manager of Dell Technology Group at the Flink Meetup in Shanghai on April 17. The content of the article is:

1. Introduction to Data Lake and Iceberg 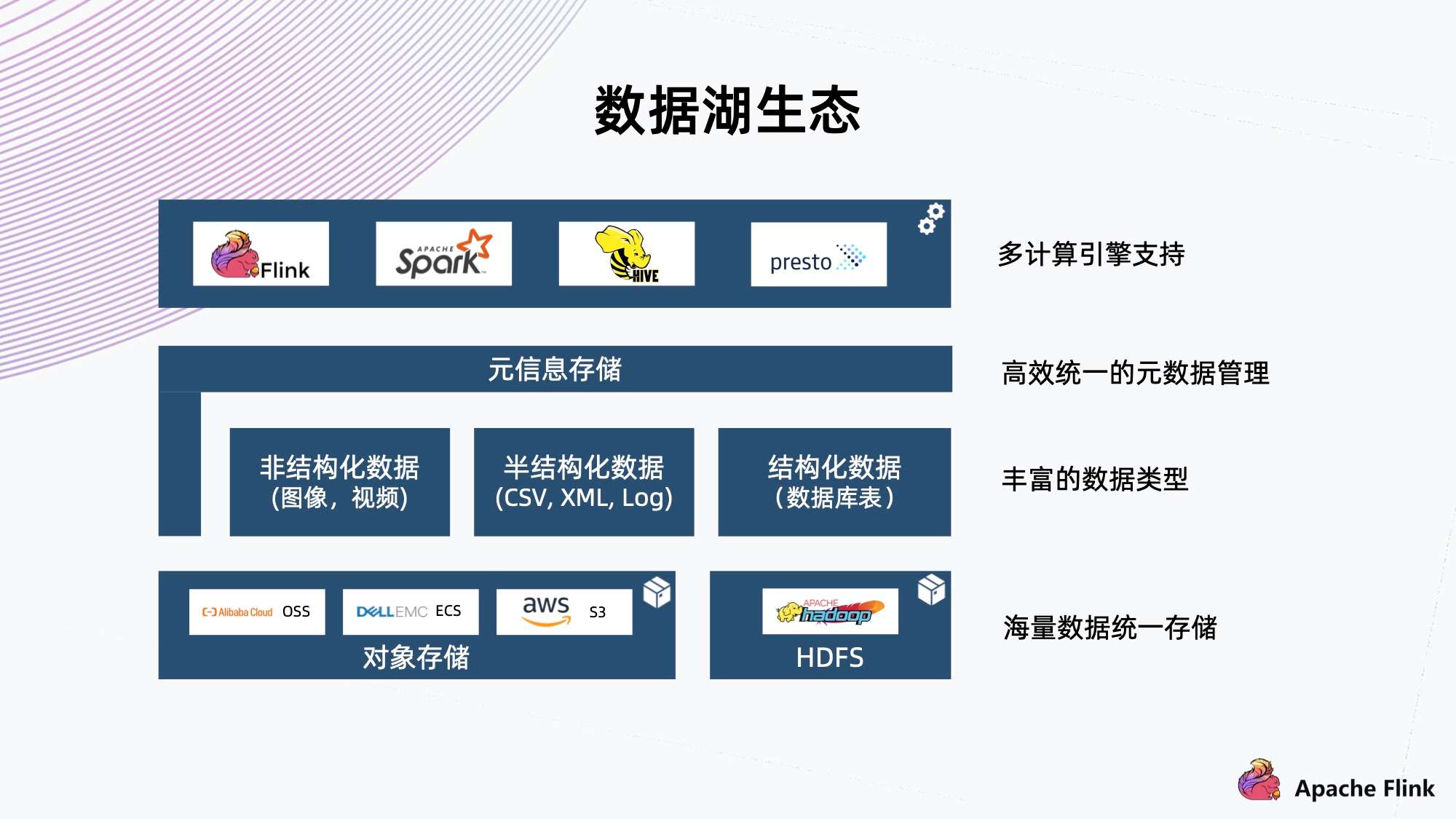 As shown in the figure above, for a mature data lake ecology:

2. Application scenarios of structured data on the data lake 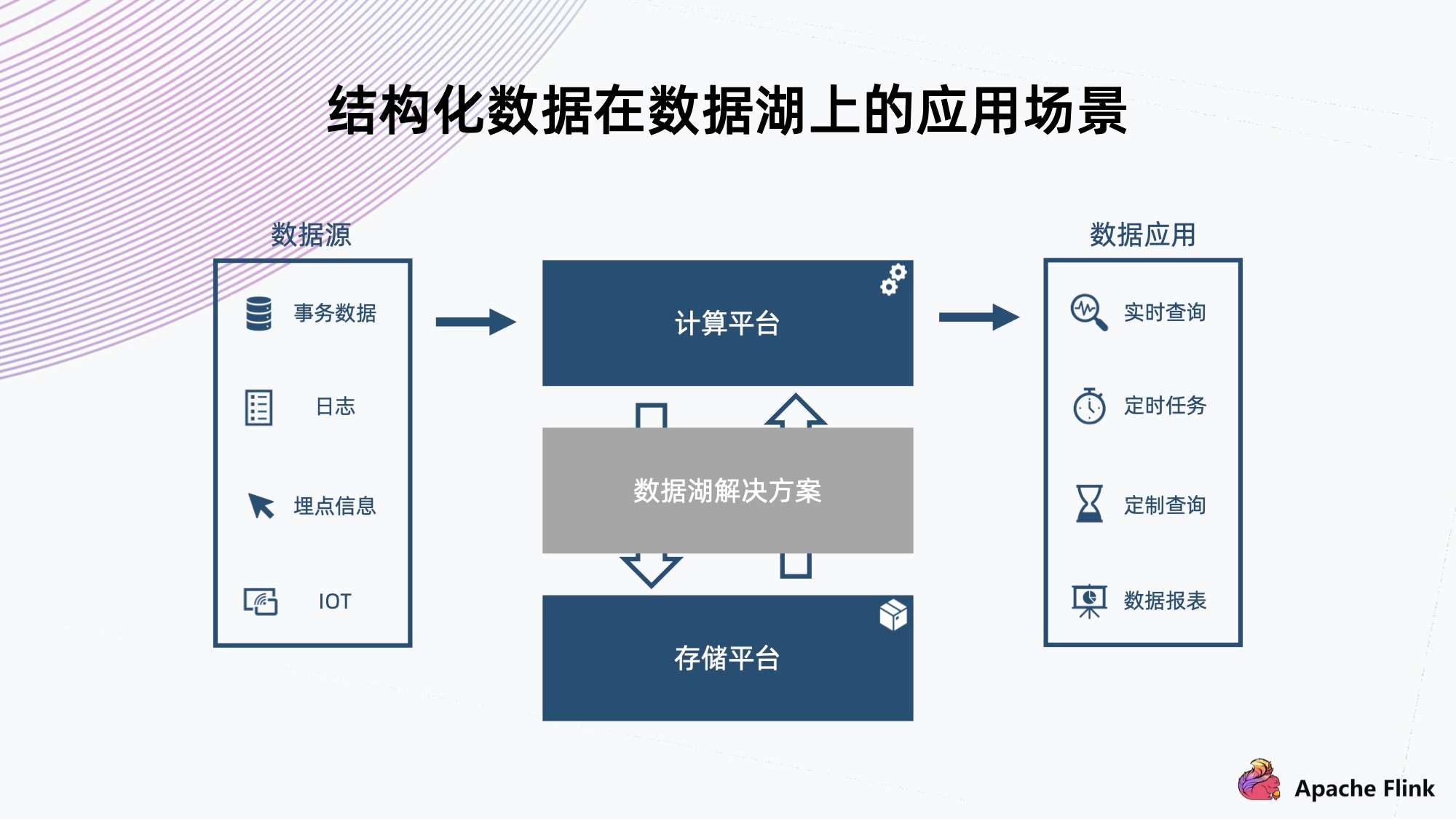 The picture above shows a typical application scenario on a data lake.

There may be various data, different data sources and different formats on the data source. For example, transaction data, logs, buried point information, IOT, etc. These data pass through some streams and then enter the computing platform. At this time, it needs a structured solution to organize the data on a storage platform, and then use the back-end data application for real-time or regular query.

What characteristics does such a database solution need to have?

3. Typical solutions of structured data on the data lake 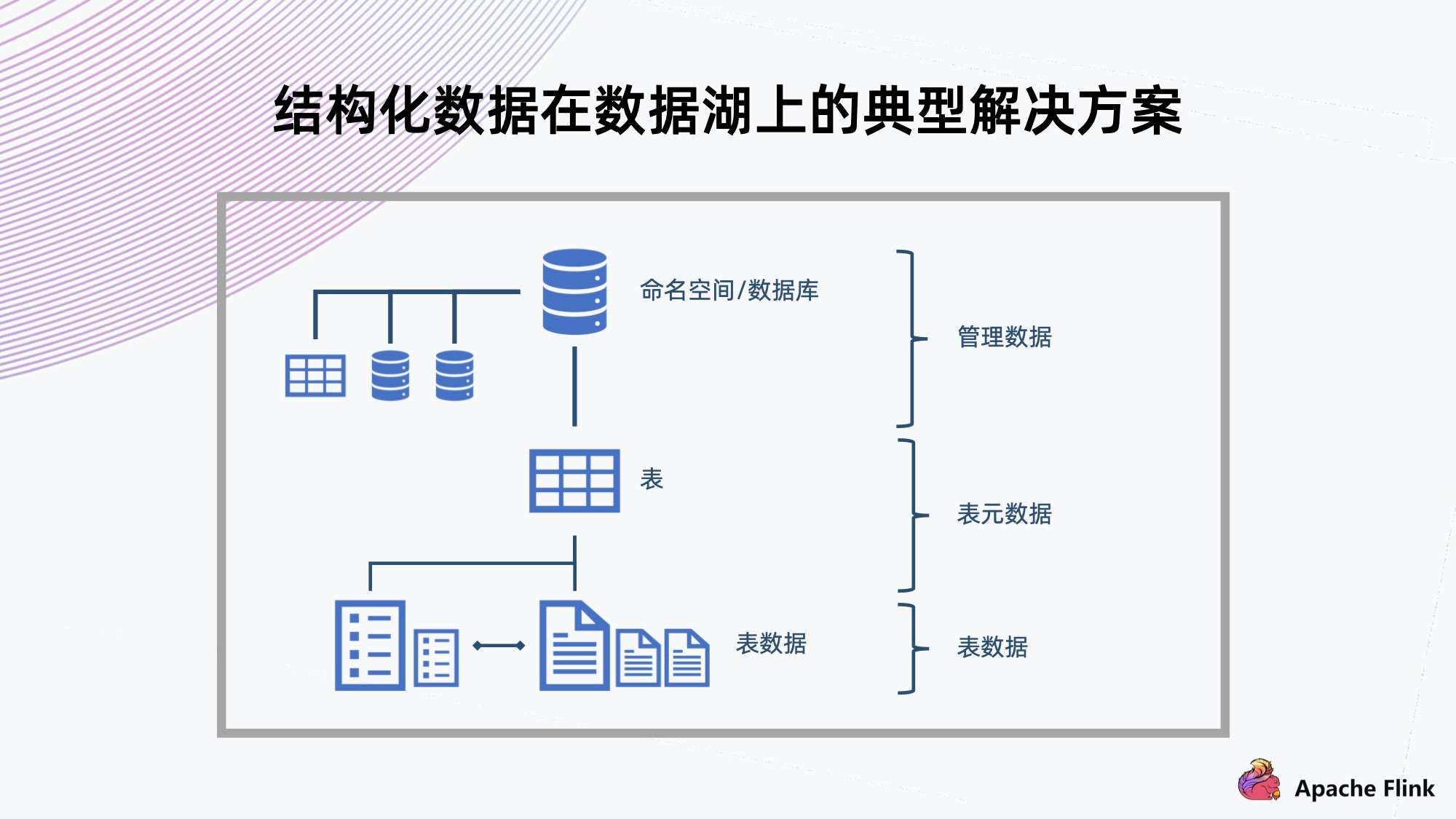 For data structured organization, the typical solution is to use the traditional organization of the database.

As shown in the figure above, there is a namespace at the top, and the isolation of database tables; there are multiple tables in the middle, which can provide a variety of data schema storage; the bottom will put data, the table needs to provide ACID characteristics, and also support the evolution of local Schema. 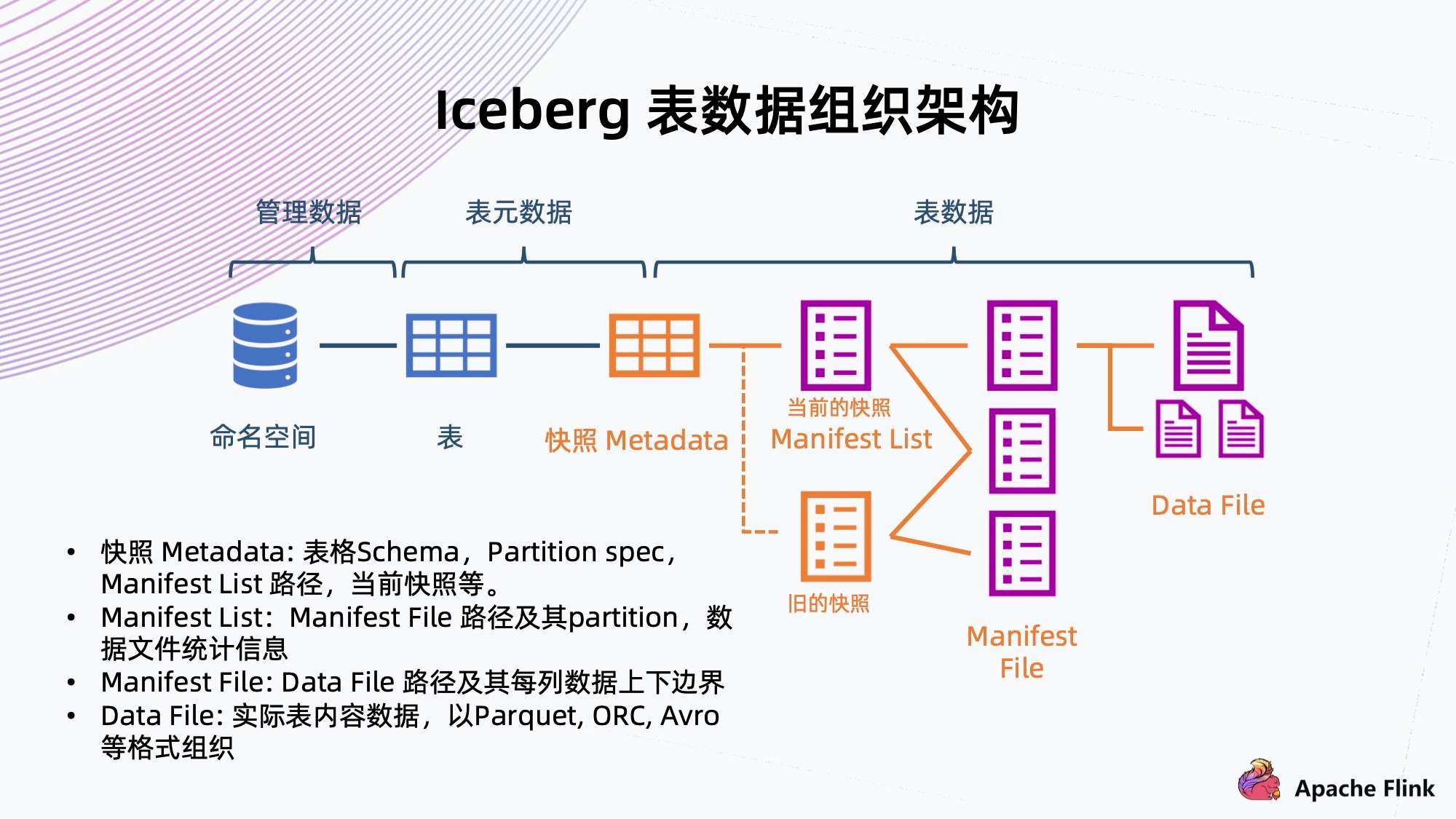 Next, let's take a look at how Iceberg organizes the data. As shown in FIG: 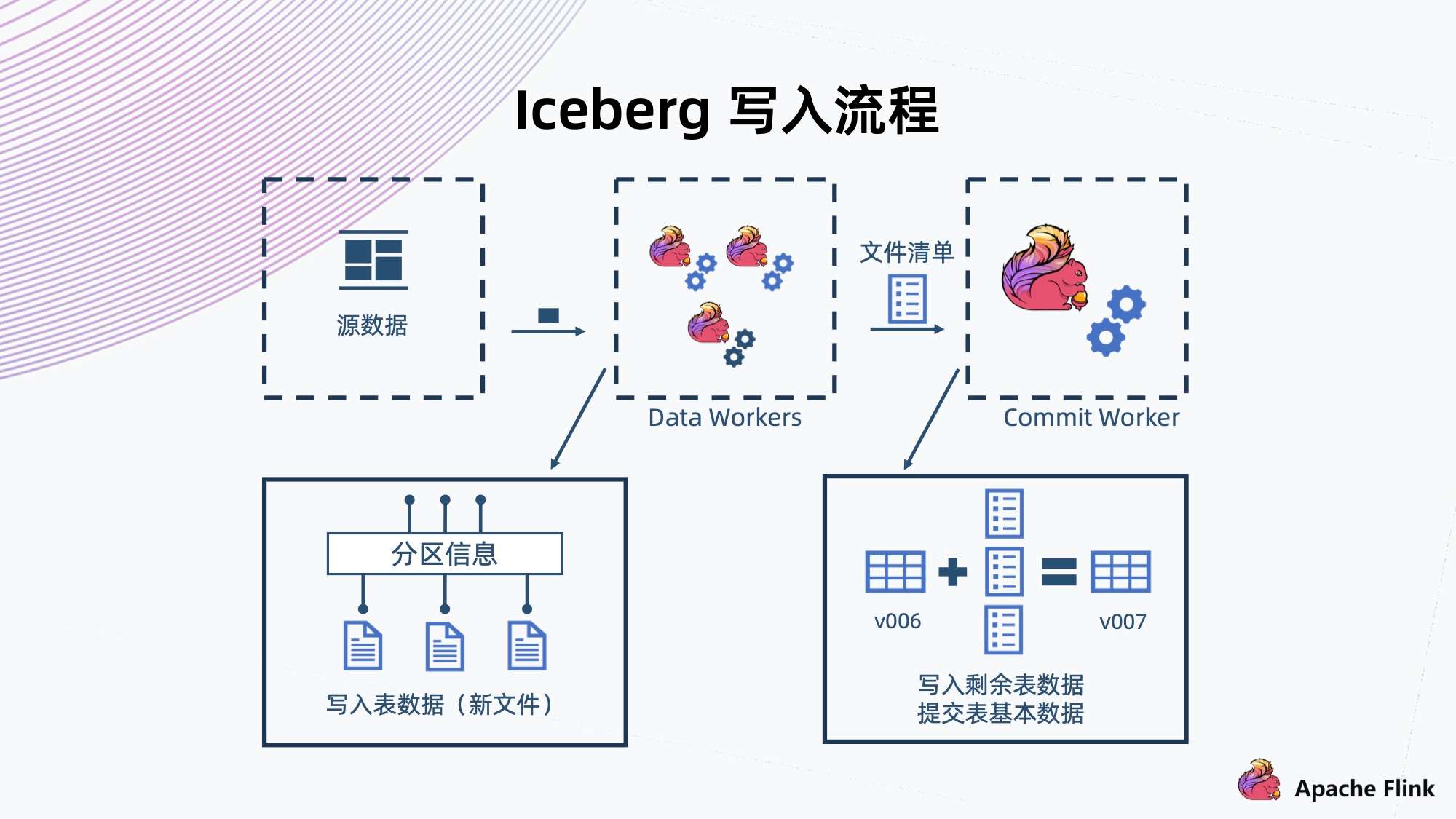 The above is the flow chart of Iceberg data writing. Here, the calculation engine Flink is used as an example. 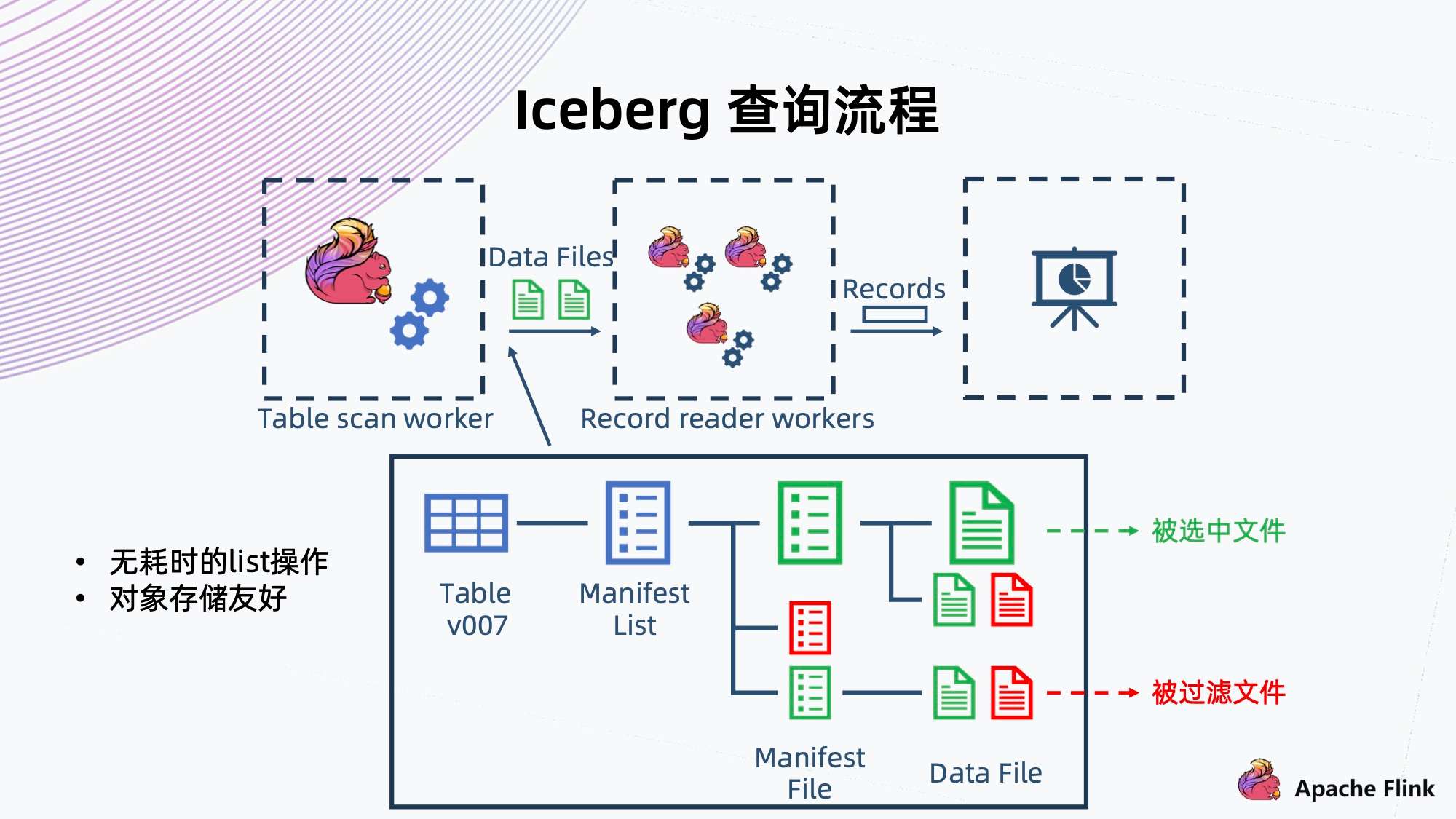 Above is the Iceberg data query process.

One feature can be seen here, that is, no List is used in the entire data query process. This is because Iceberg has recorded it completely. The tree structure of the entire file does not require List, and it is directly pointed to by a single path. , So there is no time-consuming List operation in query performance, which is more friendly to object storage, because it is a resource-consuming operation to store objects on the List.

7. The features of Iceberg Catalog at a glance

Iceberg provides Catalog with a good abstraction to connect data storage and metadata management. Any storage, as long as it implements Iceberg's Catalog abstraction, has the opportunity to connect with Iceberg to organize access to the above data lake solution. 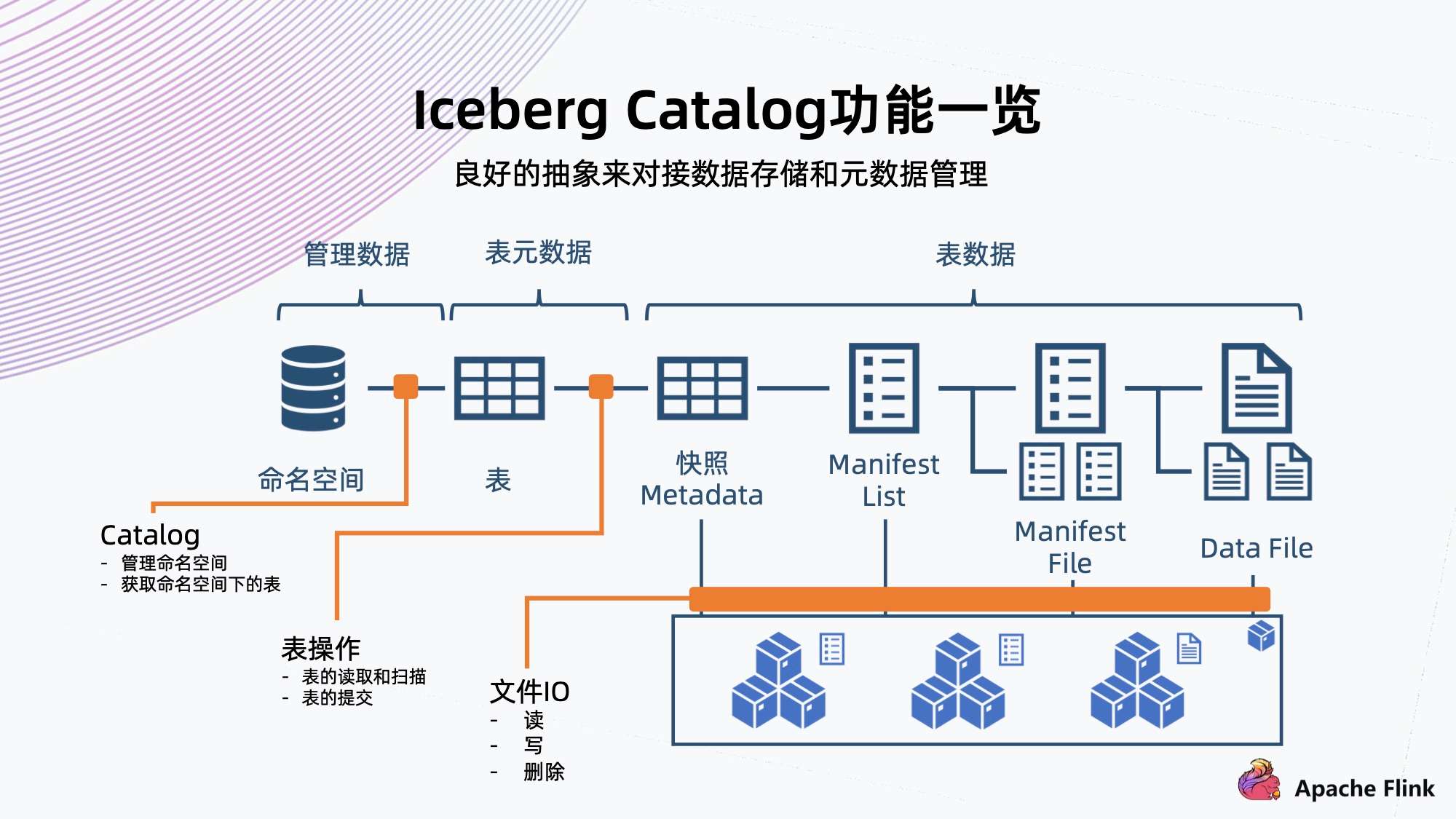 As shown in the figure above, the Catalog mainly provides several abstractions.

This can provide a flexible operating space and facilitate the docking of various underlying storage.

The existing Iceberg Catalog implementation in the community can be divided into two parts, one is the data IO part, and the other is the metadata management part. 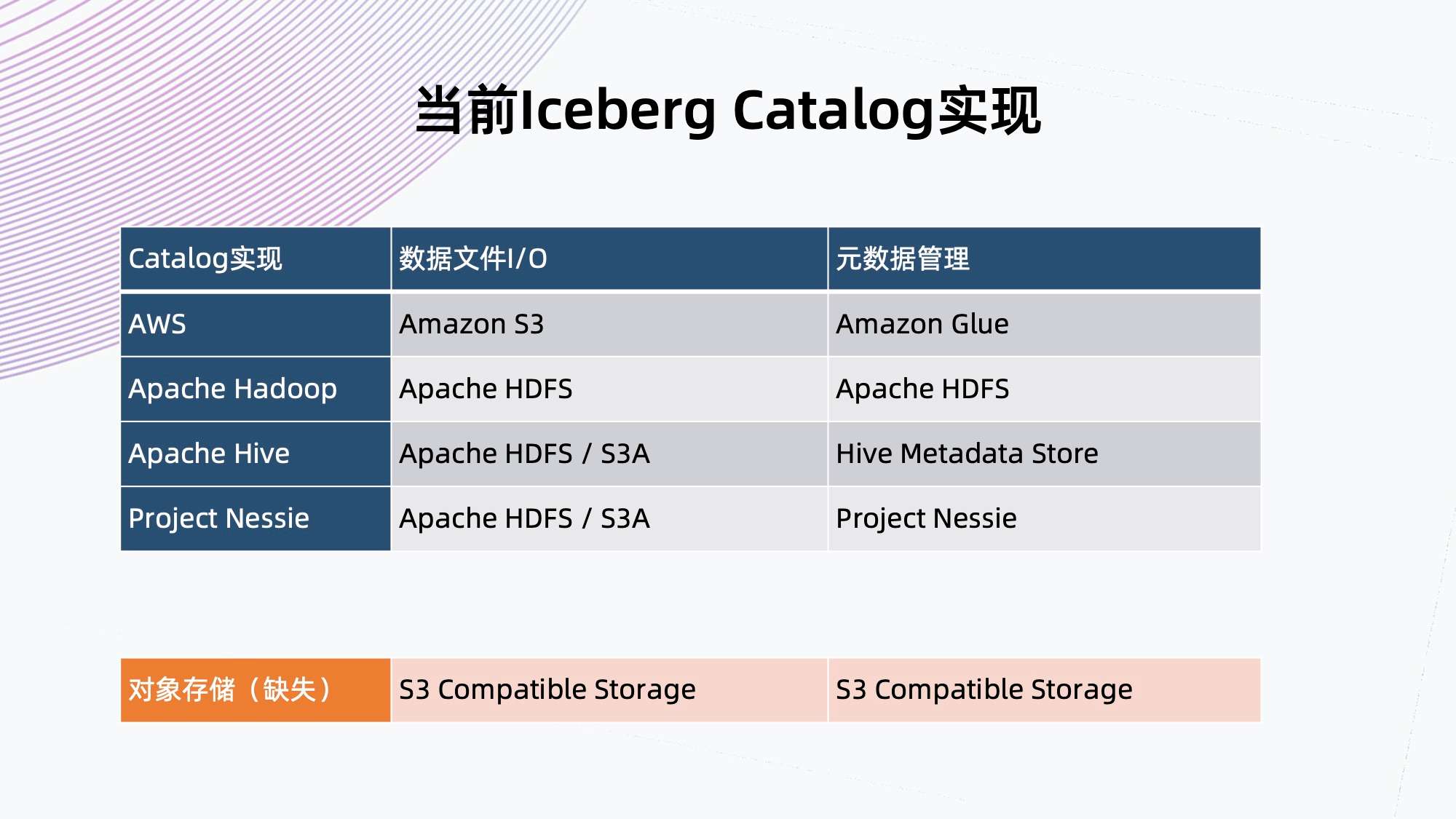 As shown in the figure above, in fact, there is no Catalog implementation for private object storage. S3A can connect to object storage in theory, but it uses file system semantics instead of natural object storage semantics. Simulating these file operations will have additional overhead. What we want to achieve is to transfer all data and metadata management to an object storage, rather than a separate design.

2. Comparison of Object Storage and HDFS

There is a question here. Why use object storage when HDFS is available?

As shown below, we compare object storage with HDFS from various angles. 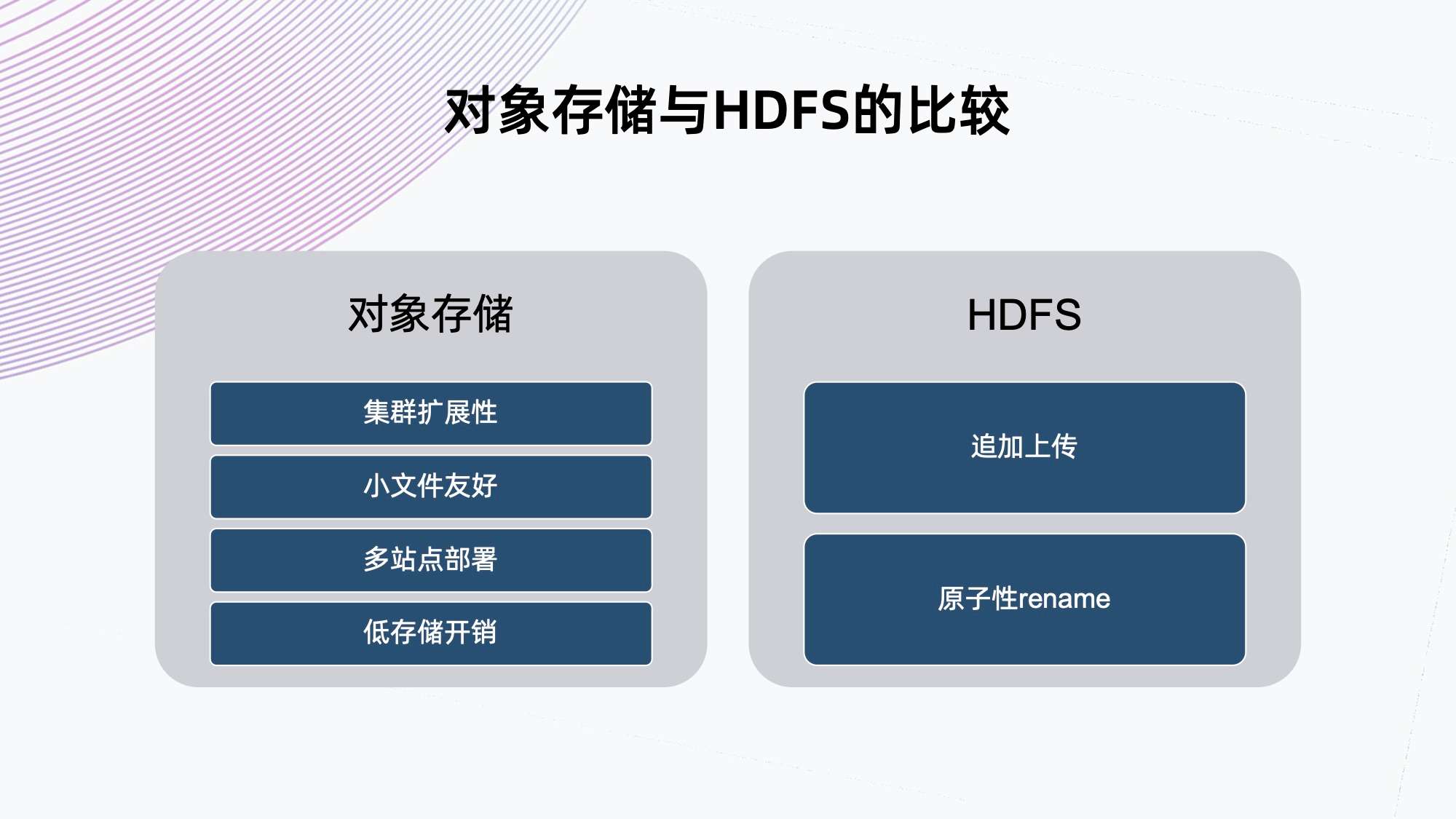 In summary, we believe that:

The following is a brief description of the respective advantages of the two storage. 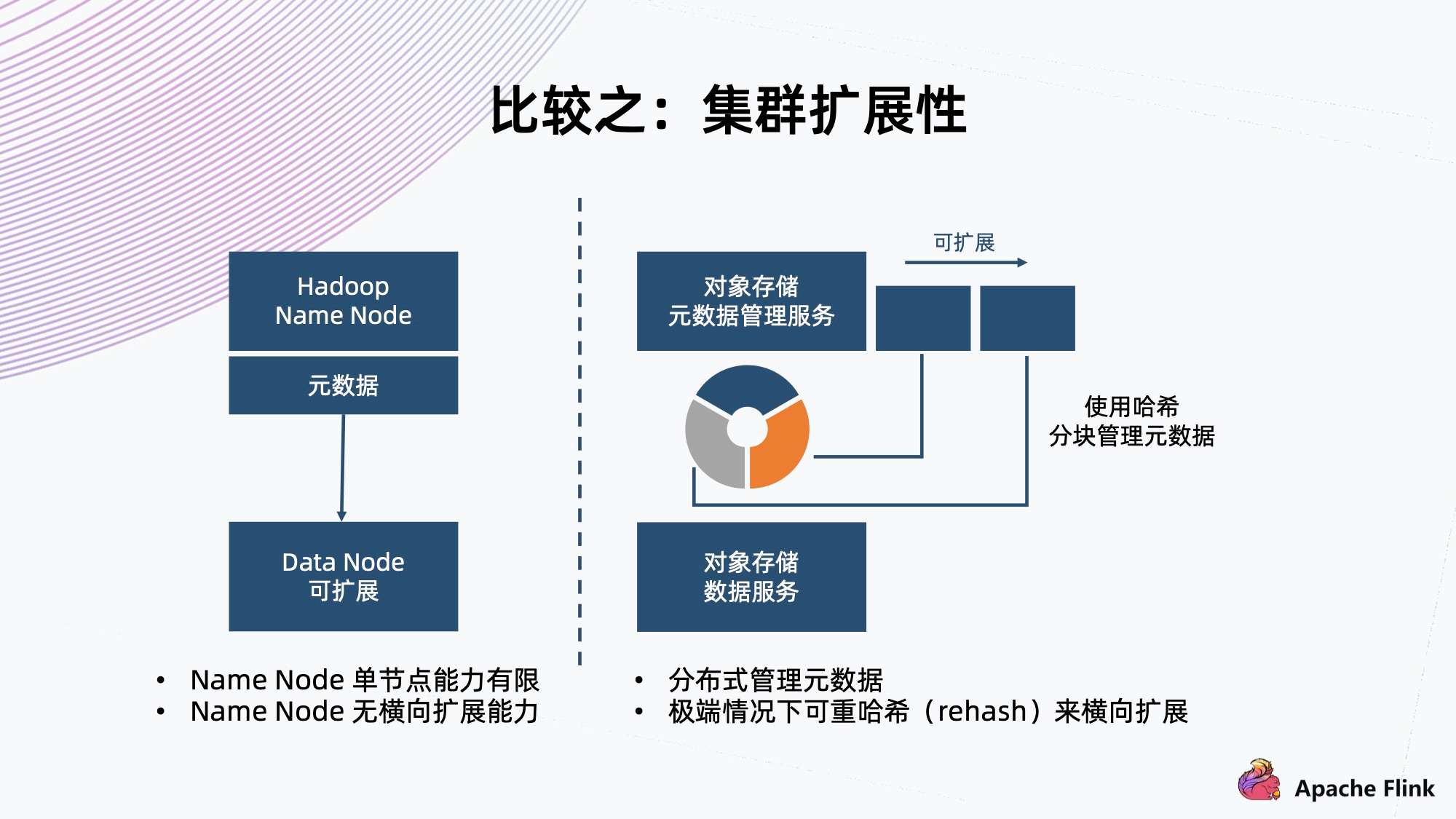 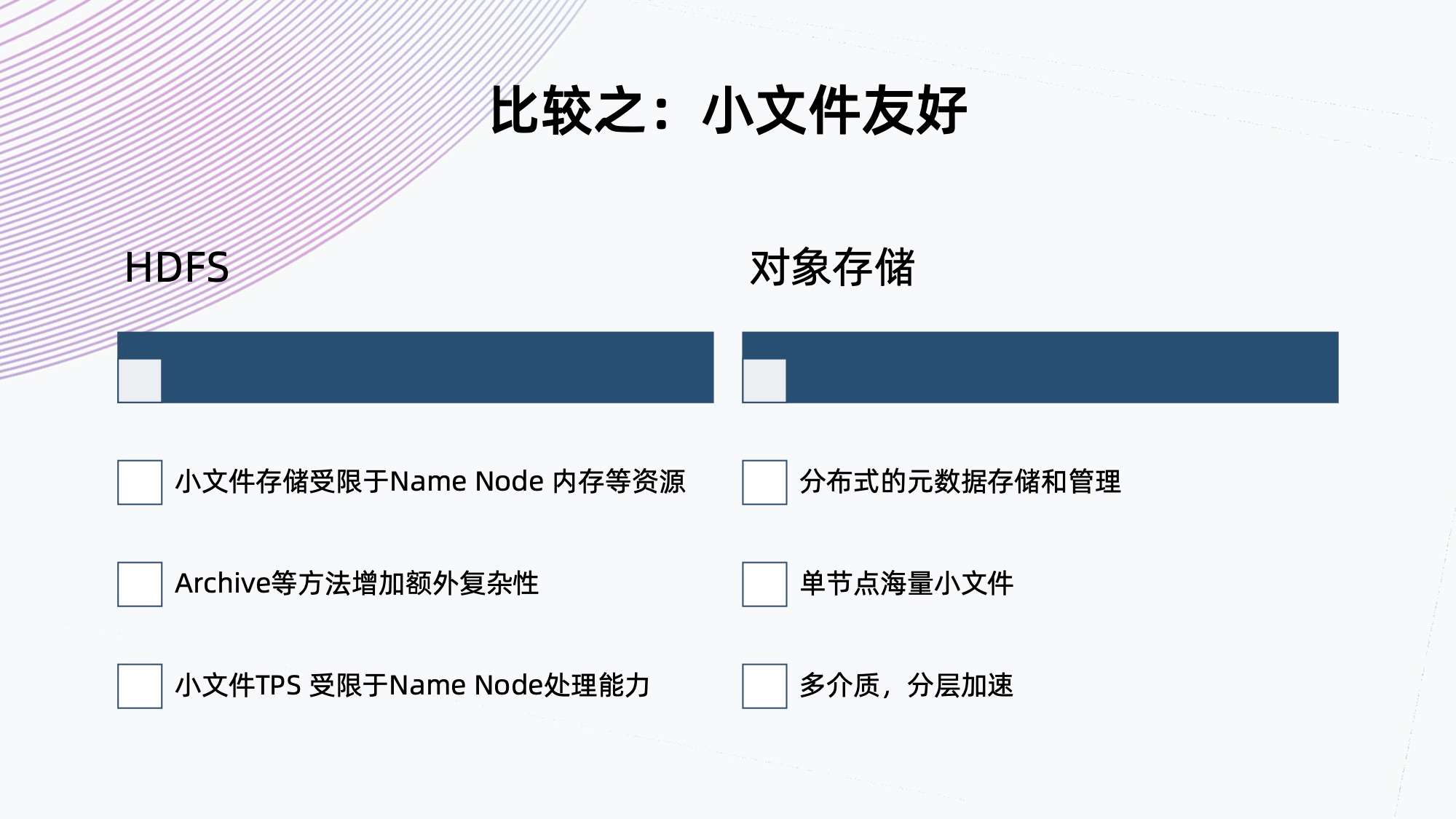 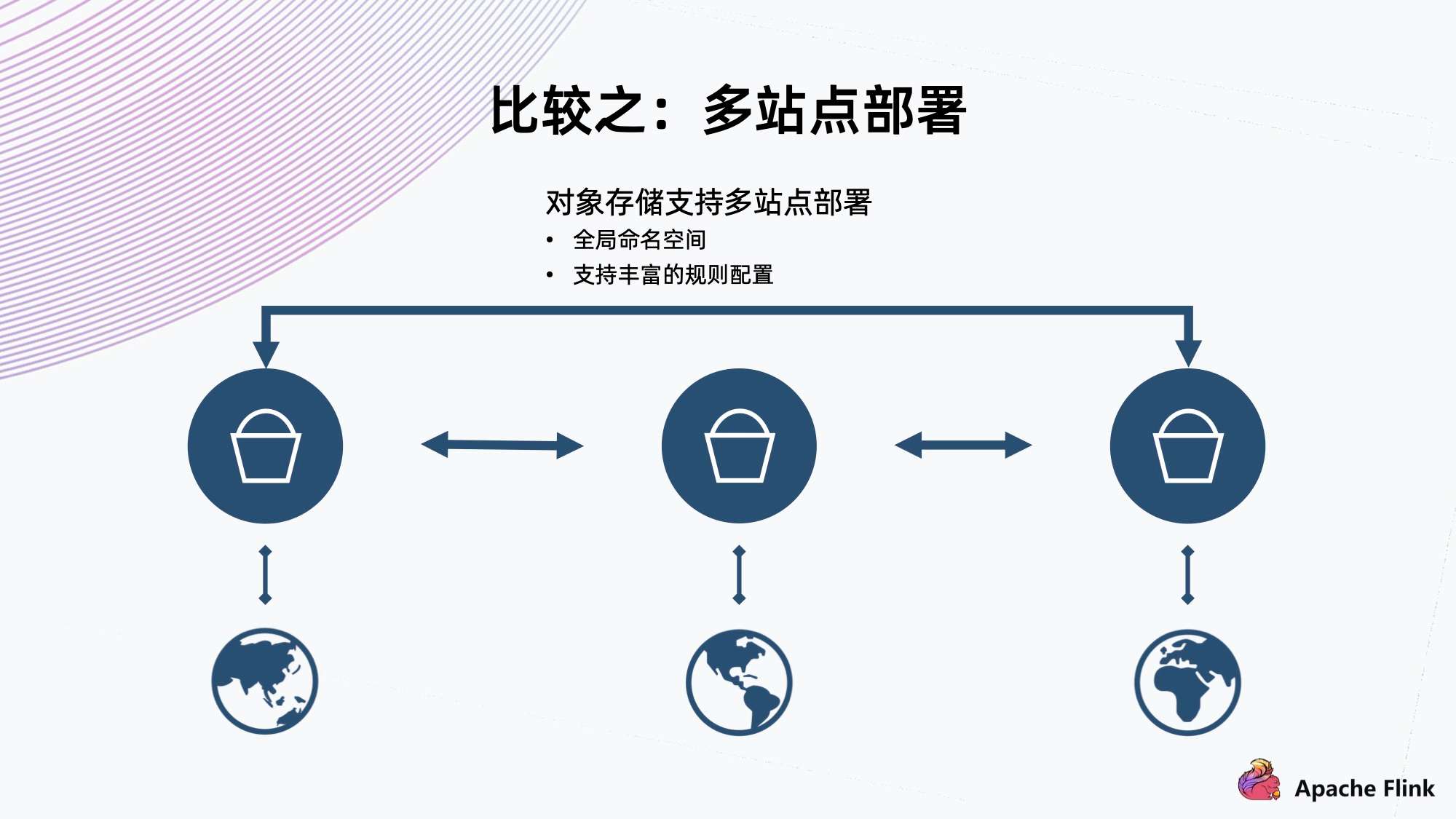 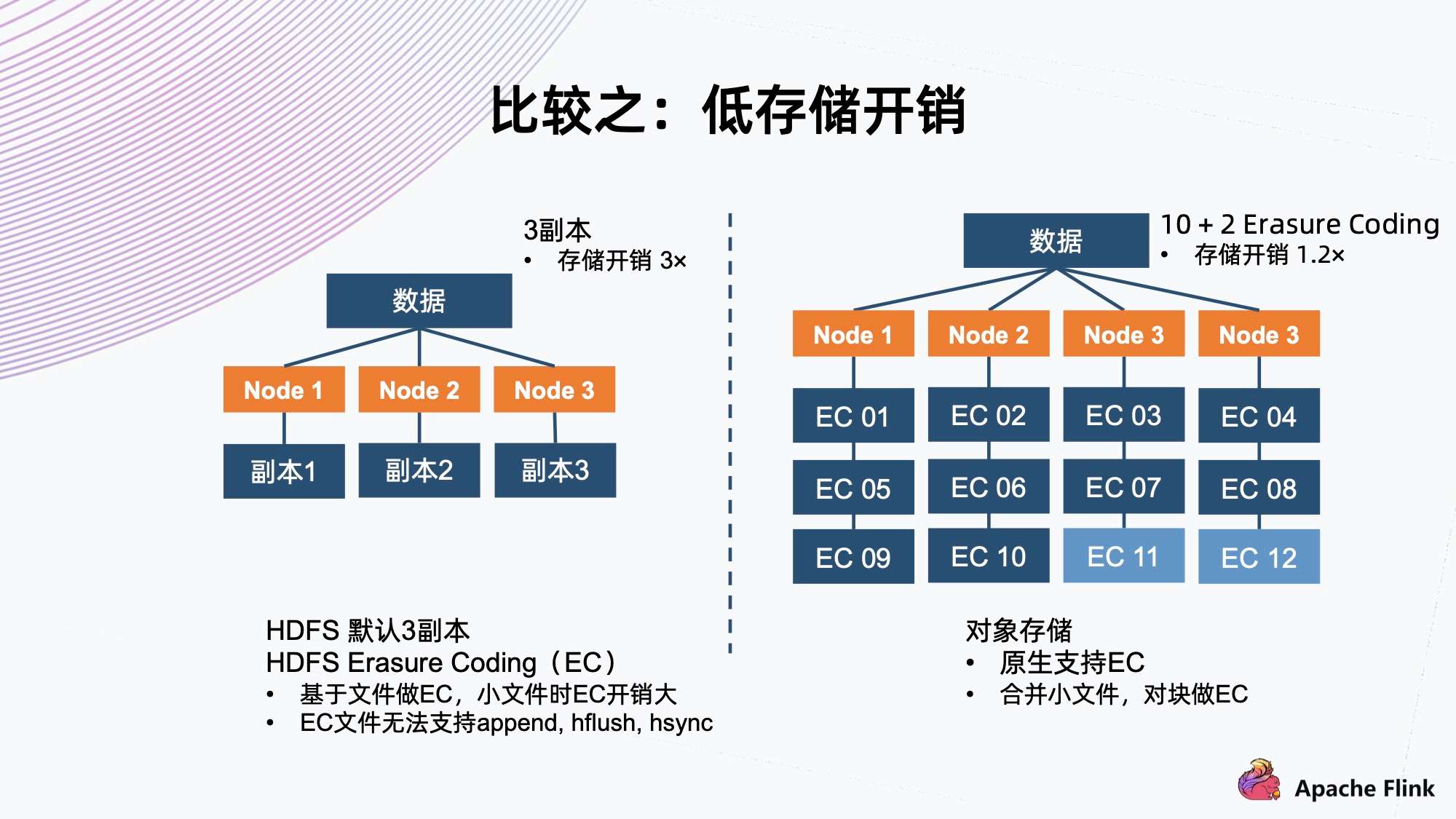 3. The challenge of object storage: additional upload of data 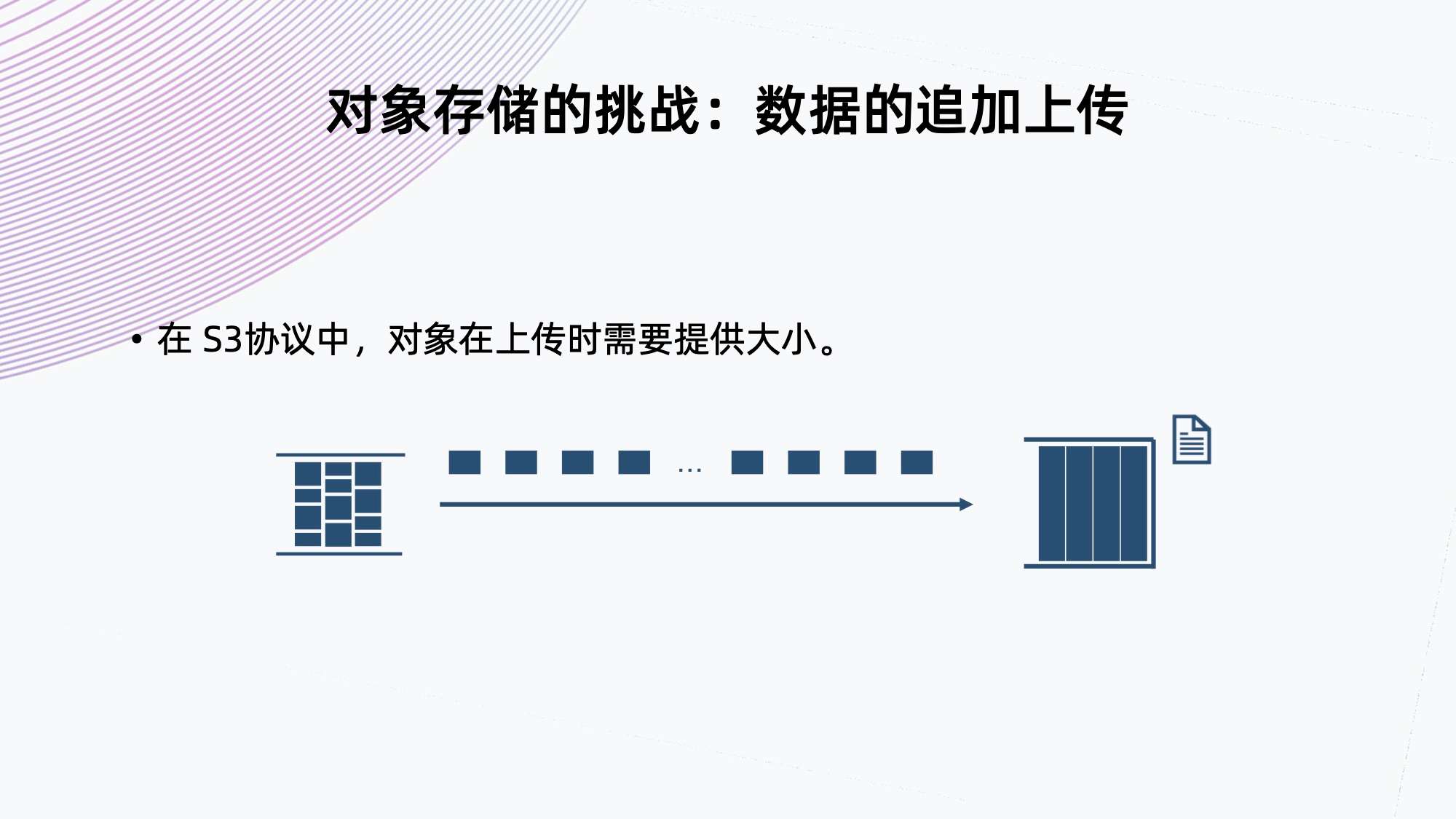 In the S3 protocol, objects need to provide their size when uploading.

Take the S3 standard as an example. When the object storage is docked with Iceberg, the S3 standard object storage does not support the interface for additional data upload. The protocol requires the file size to be provided when uploading files. So in this case, it is not very friendly to this kind of streaming File IO incoming. 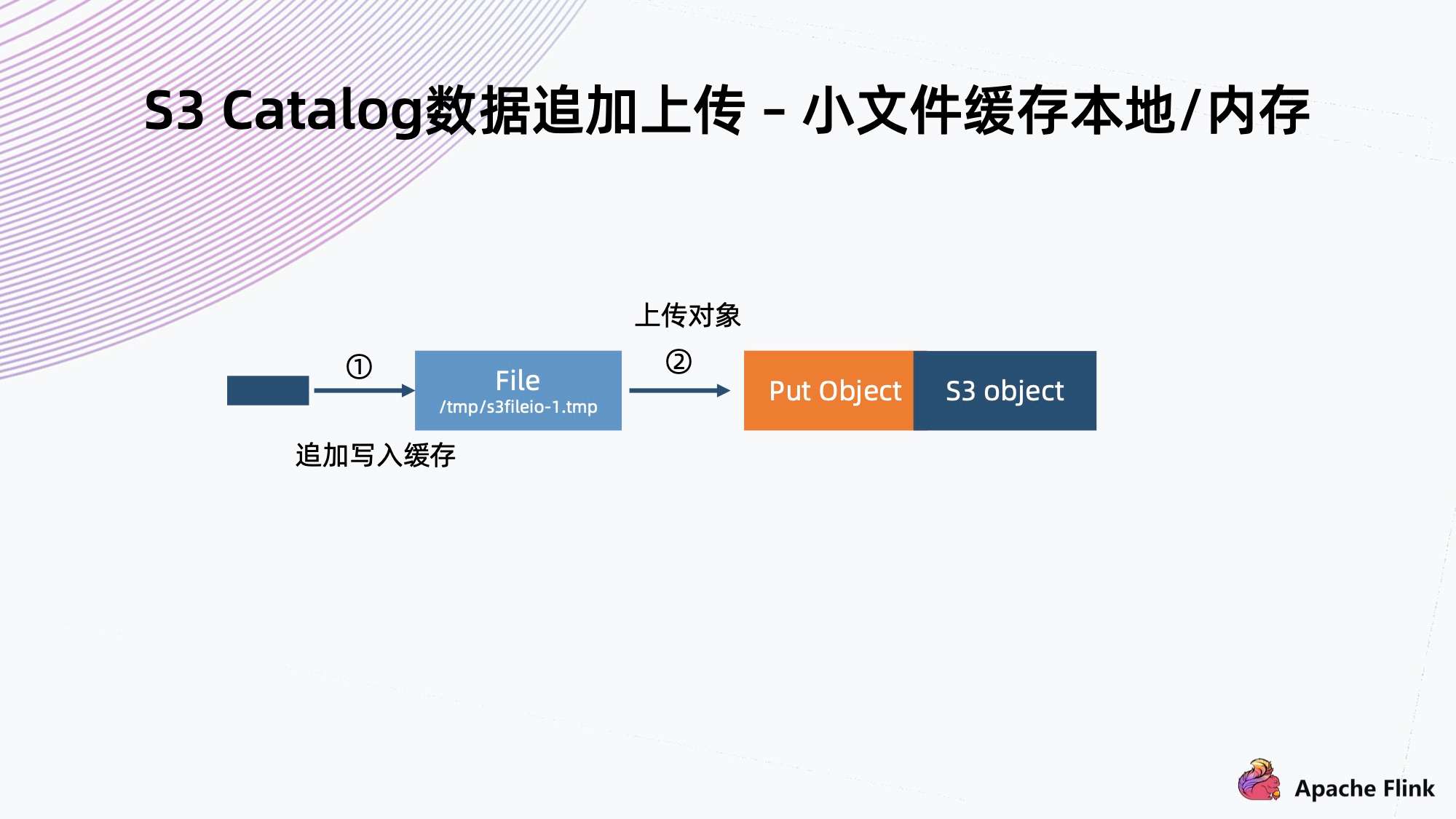 For some small files, they are written to the local cache/memory when they are streamed, and after they are completely written, they are uploaded to the object storage. 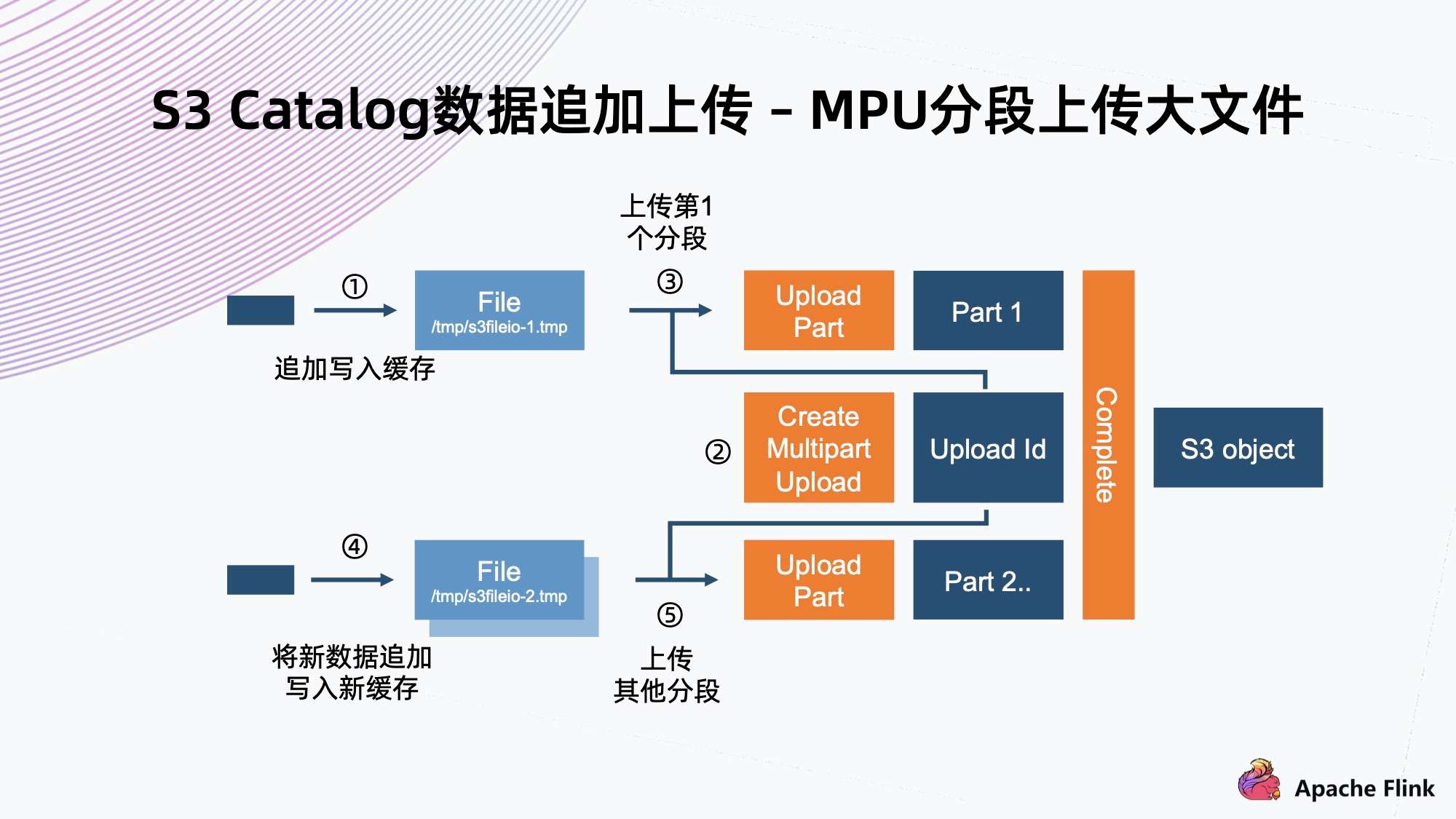 For large files, the MPU defined by the S3 standard will be used for multipart upload.

It is generally divided into several steps:

MPU has advantages and disadvantages: 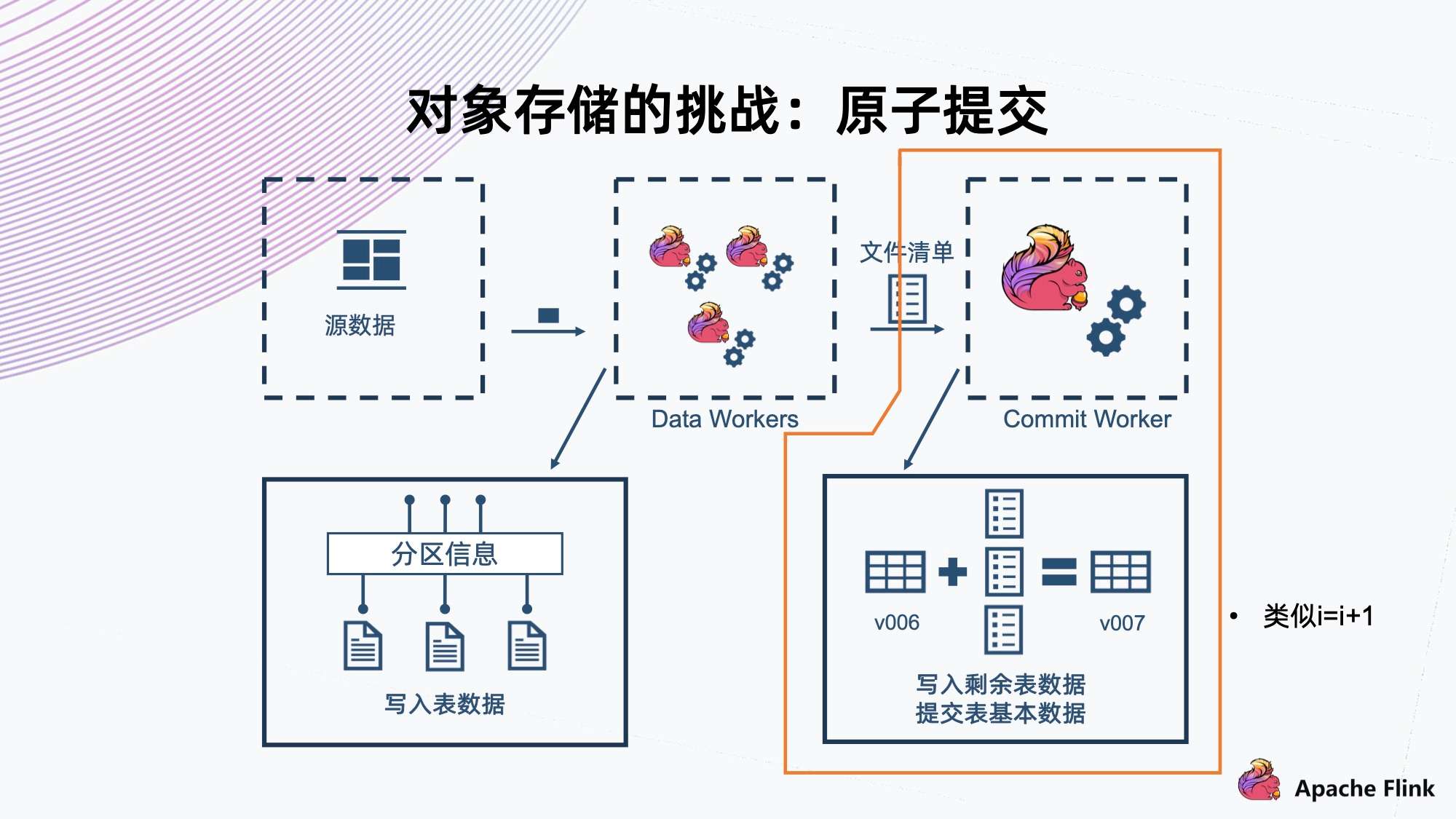 The next problem is the atomic submission of object storage.

As mentioned earlier, in the process of data injection, the final commit is actually divided into several steps, which is a linear transaction. First, it has to read the current snapshot version, then merge the file list this time, and then submit its new version. This operation is similar to the common "i=i+1" in our programming. It is not an atomic operation, and the object storage standard does not provide this capability. 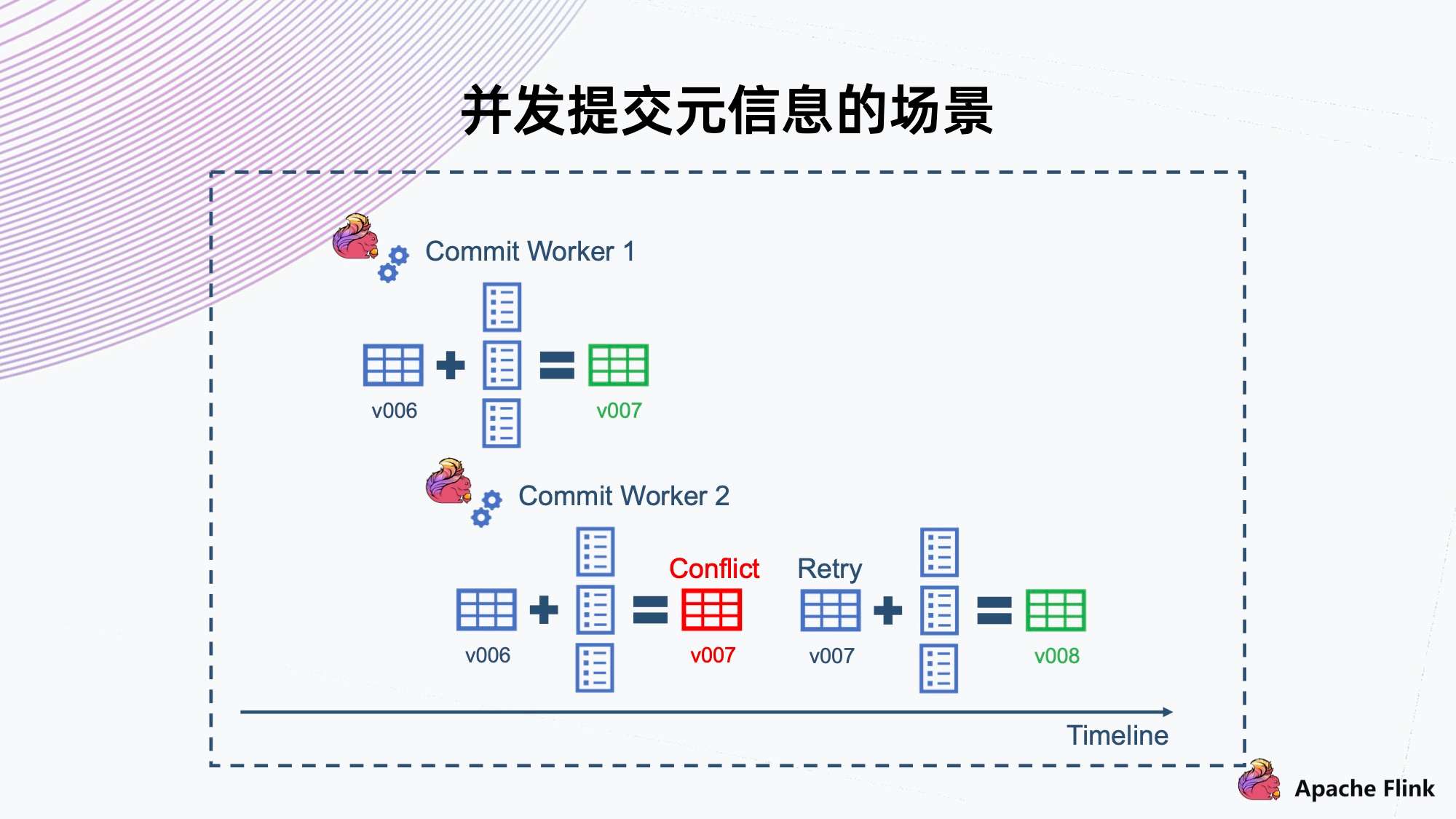 The figure above is a scenario where meta-information is submitted concurrently.

This is a typical conflict scenario. A mechanism is needed here, because if it cannot detect that it is a conflict, submitting v007 again will overwrite the above v007, which will cause all the data submitted last time to be lost. 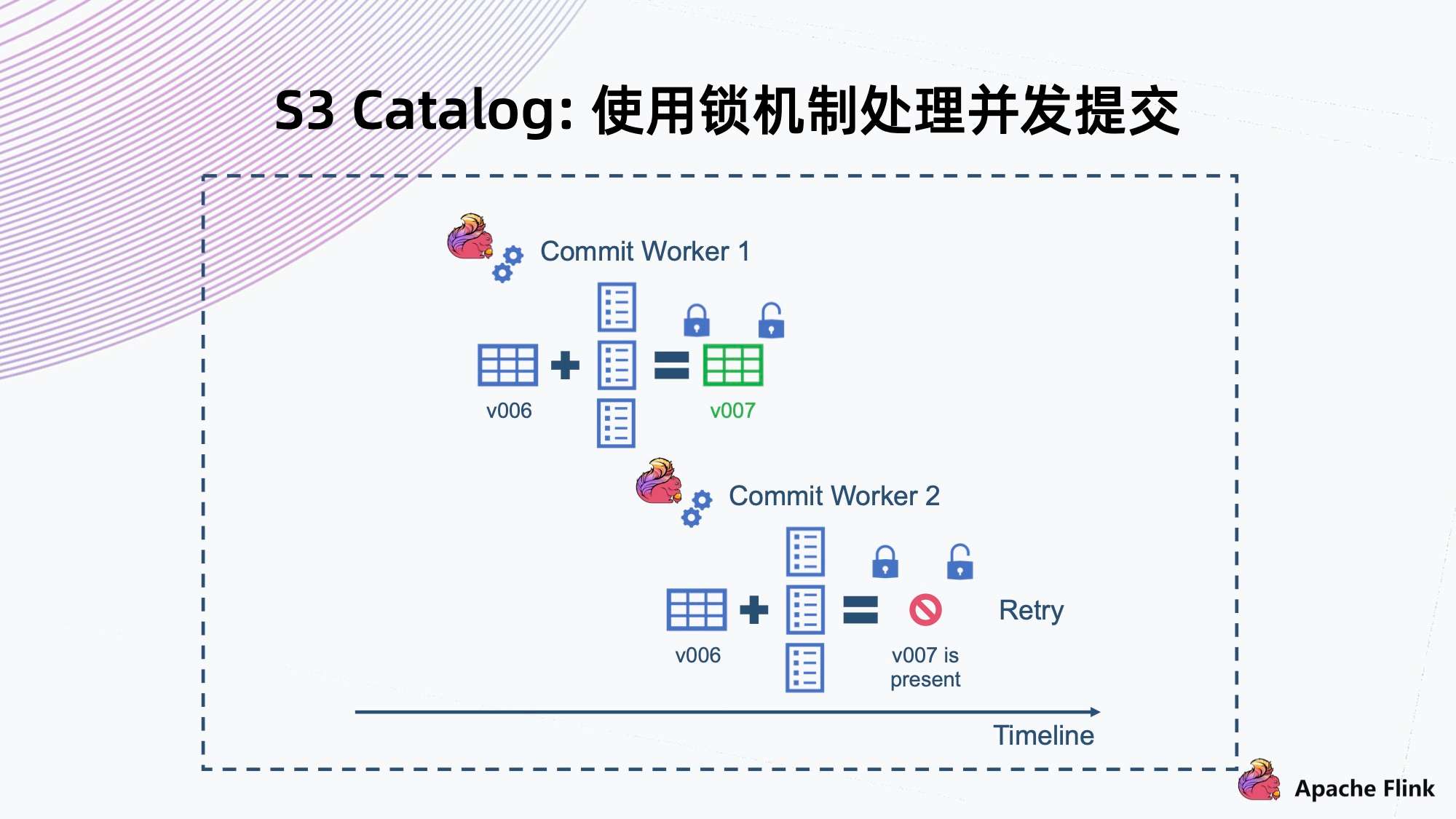 As shown in the figure above, we can use a distributed lock mechanism to solve the above problems.

This is to solve the problem of concurrent submission through locks. 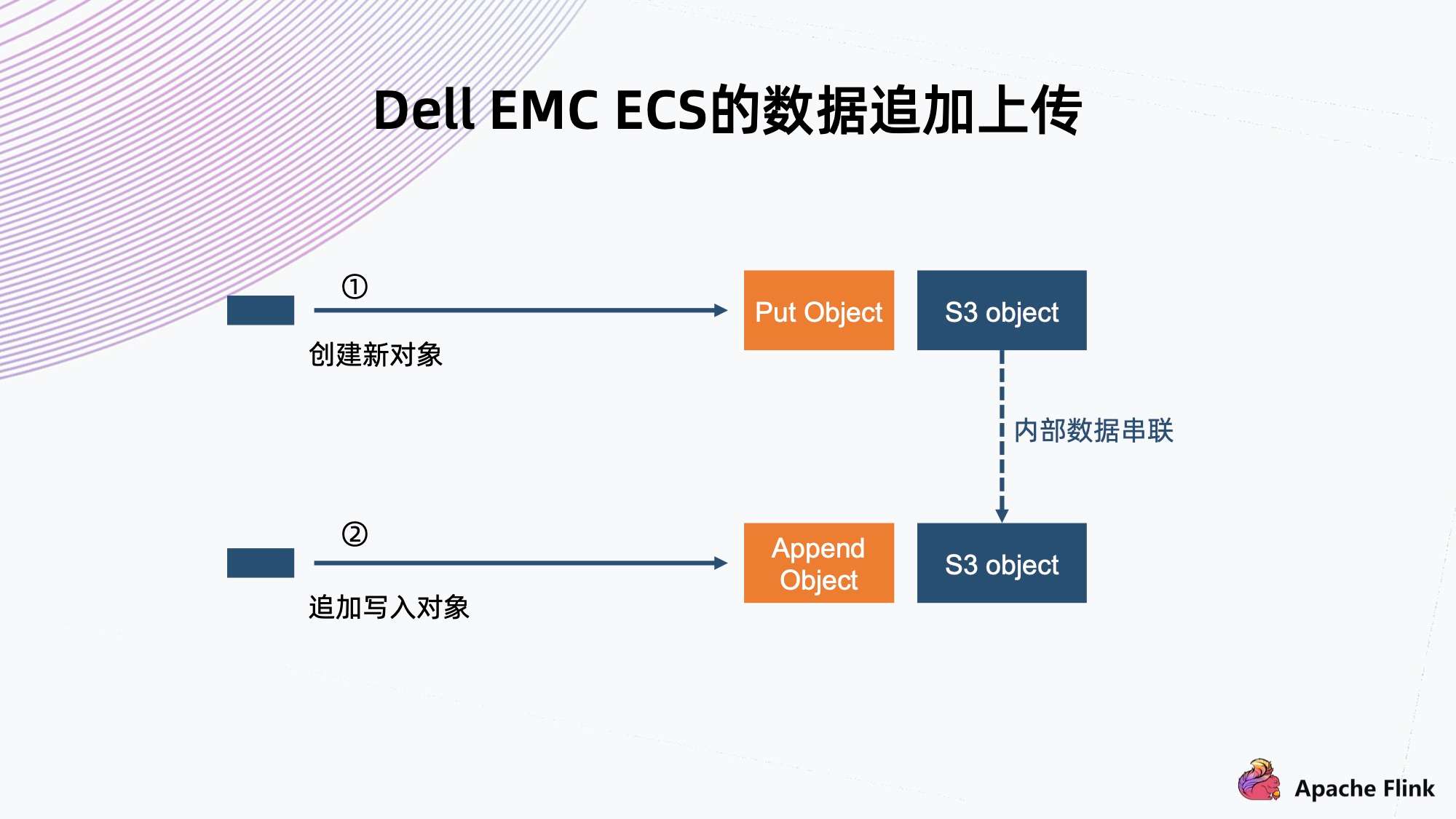 The S3 standard-based object storage and Iceberg problem solutions have some problems, such as performance loss, or the need to deploy additional lock services.

Dell EMC ECS is also an object storage. Based on this question, there are different answers. It has some extensions based on the S3 standard protocol and can support additional uploads of data.

The difference between its additional upload and MPU is that it has no block size limit. The block can be set smaller, and it will be connected internally after uploading, and it is still a valid file.

Both additional upload and MPU can be adapted to different scenarios to a certain extent.

The MPU has the ability to accelerate uploading. The performance of additional uploads is sufficient when the speed is not very fast, and it does not have the initialization and merging operations of the MPU, so the two can be used in different scenarios in terms of performance. This implementation has the same effect as the lock mechanism, and there is no need to redeploy the lock service externally to ensure the issue of atomic submission. 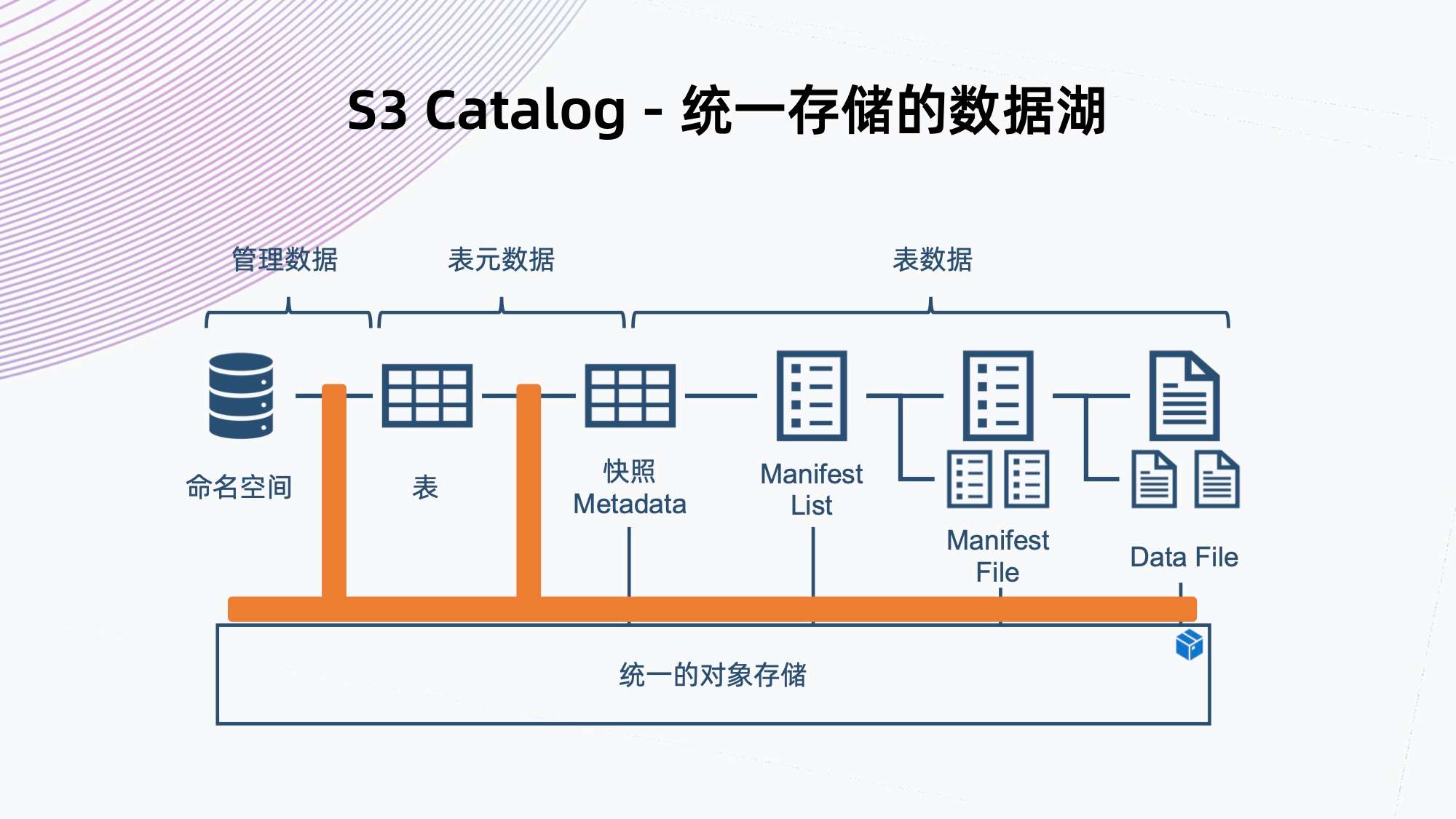 After solving these problems, all data and metadata management can be transferred to the object storage, no additional deployment of metadata services is required, and the concept of truly unified data storage can be achieved. 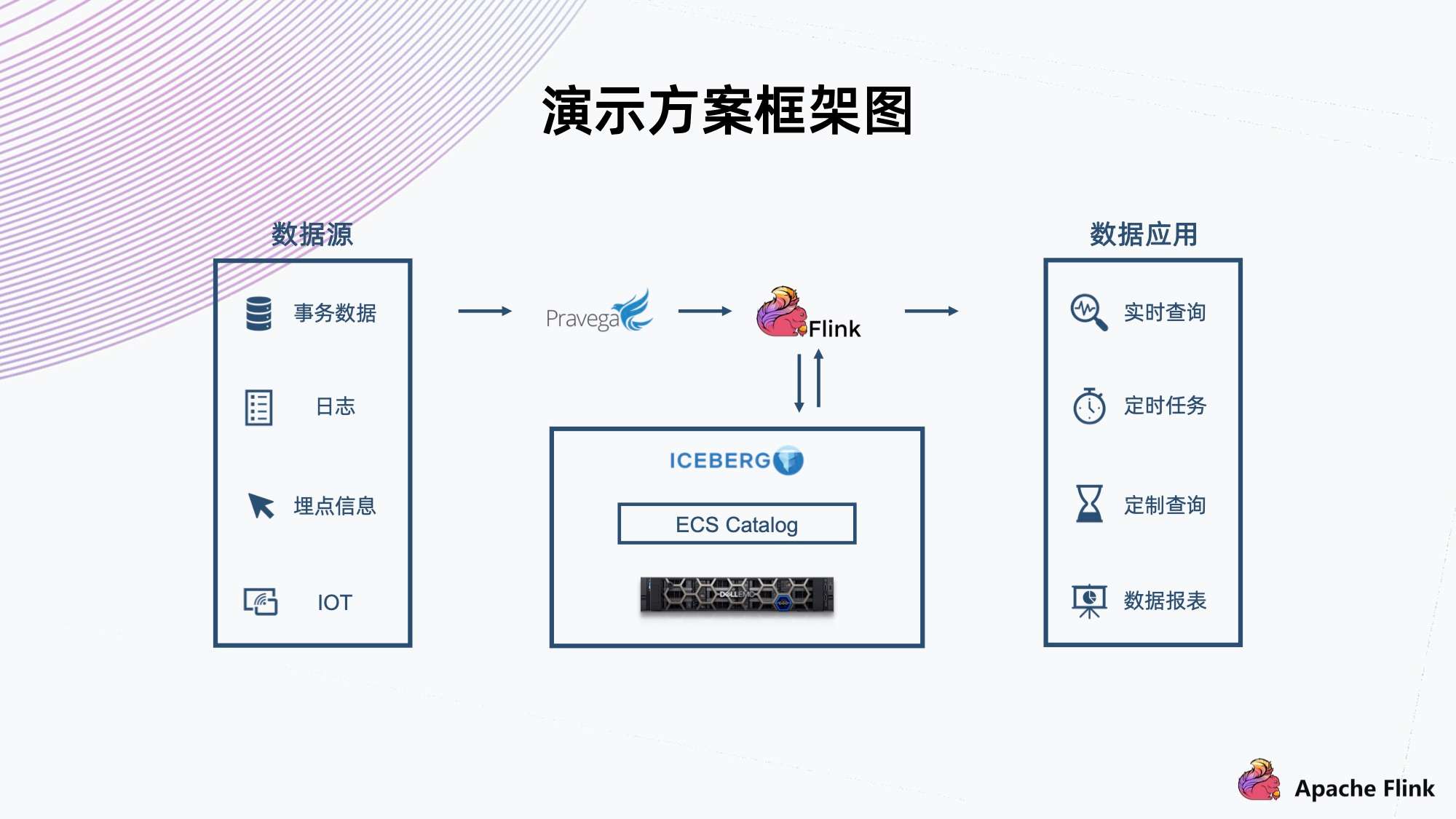 As shown above, the demonstration program uses Pravega, which can be simply understood as an alternative to Kafka, but it has been optimized for performance.

In this example, we will inject data into Pravega's stream, and then Flink will read the data from Pravega for analysis, and then store it in the Iceberg organization. Iceberg uses ECS Catalog to directly connect to the object storage without any other deployment. Finally, Flink reads this data.

Fourth, some thoughts on storage optimization 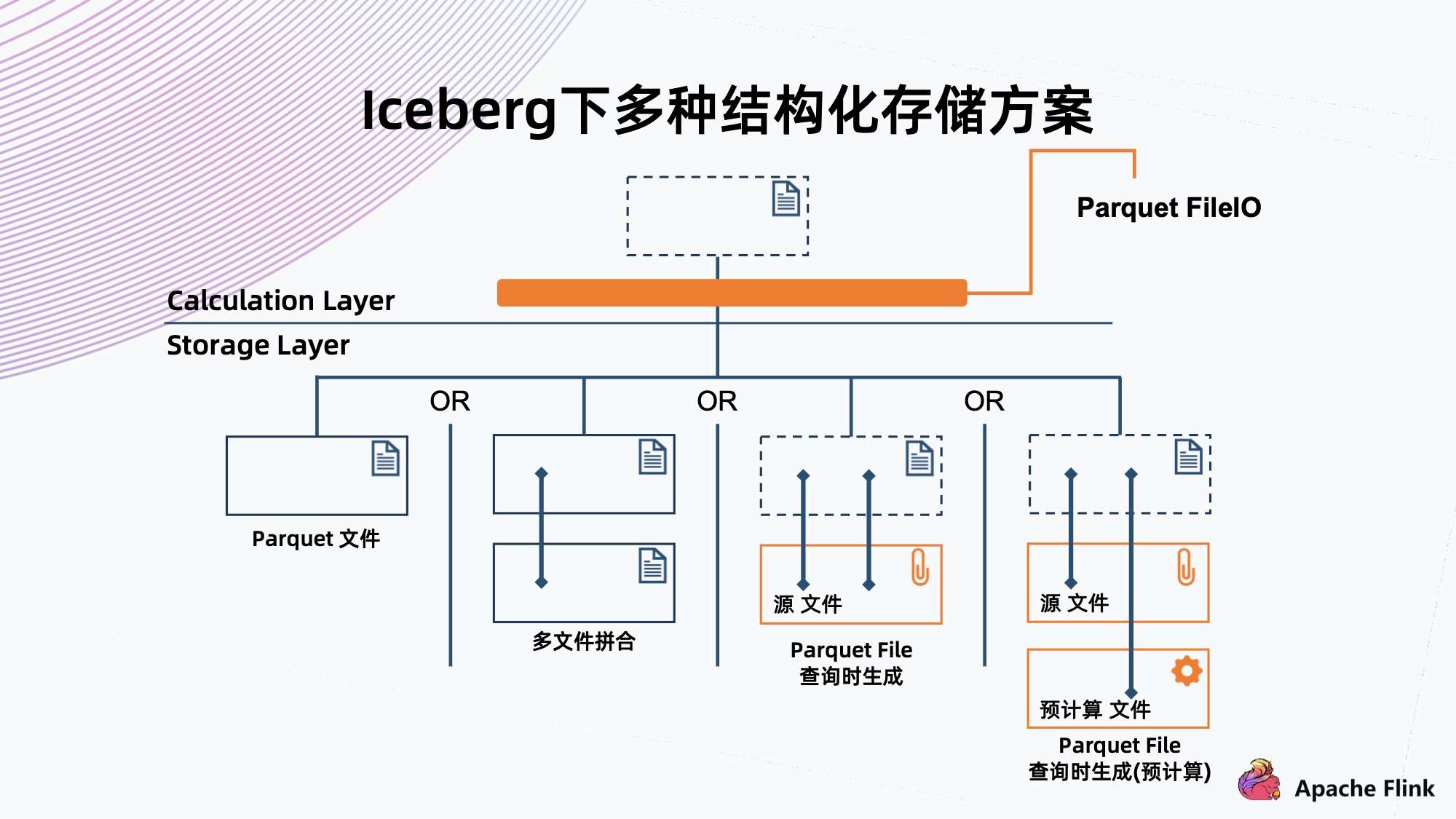 The above picture shows the current data organization structure supported by Iceberg, and you can see that it directly stores Parquet files in the storage.

Our thinking is if this lake and the metadata lake are actually a lake, is it possible that the generated Parquet files and source files have great data redundancy, and whether the storage of redundant information can be reduced.

For example, in the most extreme case, if a piece of information of the source file is recorded in Iceberg, the Parquet data file is not stored. When you want to query, you can customize File IO to generate a Parquet-like format in real time based on the original file in memory and submit it to the upper application for query to achieve the same effect.

However, this method is limited to situations where the storage cost is very high, but the query performance is not high. Achieving this is also based on Iceberg's good abstraction, because its file metadata and File IO are abstracted, and the source file can be disassembled to make it think it is a Parquet file.

Think further about whether you can optimize query performance while saving storage space.

For example, to pre-calculate, take out some commonly used columns of the source file, and then transfer the statistical information to Iceberg, and use the source file and cloud computing files when reading, you can quickly query the information, and at the same time save infrequent data Column storage space.

This is a relatively preliminary idea. If it can be realized, Iceberg can not only index the structured Parquet file format, but also index some semi-structured and structured data, and solve the upper-level query tasks through temporary calculations. A more complete Data Catalog.