Why is Netty so good, and what improvements has it made on the basis of the NIO of the JDK itself? What is its structure and workflow? Please walk into today's netty series of articles: an overview of netty architecture.

The main function of netty is to provide a simple NIO framework that can be combined with various upper-layer protocols to finally realize a high-performance server. The following is the architecture diagram provided by the netty official website:

From the above figure, we can see that the core of netty is mainly divided into three parts, which are an extensible event model, a unified API, and a powerful Byte Buffer. These three characteristics are the magic weapon for netty.

The following will explain the characteristics of netty in detail from these aspects, so that readers must understand the excellence of netty.

First, starting from the bottom layer of the Buffer data structure, netty provides an io.netty.buffer package, which defines various types of ByteBuf and its derived types.

The basis of netty Buffer is the ByteBuf class, which is an abstract class. Other Buffer classes are basically derived from this class. This class also defines the tone of netty's overall Buffer.

The purpose of netty rewriting ByteBuf is to make the lowest ByteBuf faster and more suitable for expansion than the one that comes with the JDK. Specifically, netty's ByteBuf is faster than the ByteBuffer in the JDK, and at the same time, it is easier to extend. You can customize Buf according to your needs. In addition, netty has some built-in composite buffer types, so transparent zero copy can be achieved. For the dynamic buffer type, it can be expanded on demand like StringBuffer, which is very easy to use.

What is zero copy? Zero copy means not to make a copy when it needs to be copied. We know that data will be encapsulated into individual packets for transmission during transmission using the underlying protocol. When the transmitted data is too large to fit a packet, the data needs to be split. After the destination party receives the data, it needs to assemble the received data. Under normal circumstances, this assembly operation is for the data. Copy, copy the split object to a long data space.

For example, as shown in the following example, the bottom TCP packet combination is called the top HTTP packet, but it is not copied:

How to copy it? In the last article, we know that netty provides a tool class method Unpooled. There are many methods at the beginning of the wrapped class in this tool class. Let's give a few examples:

Generally speaking, in the traditional JDK IO API, depending on the transmission type or protocol, the API used is also different. We need to develop different applications for different transmission methods, which cannot be unified. As a result, the migration cannot be smooth, and additional processing is required when the program is expanded.

To solve this problem, netty provides a unified class Channel to provide a unified API.

First look at the methods defined in Channel: 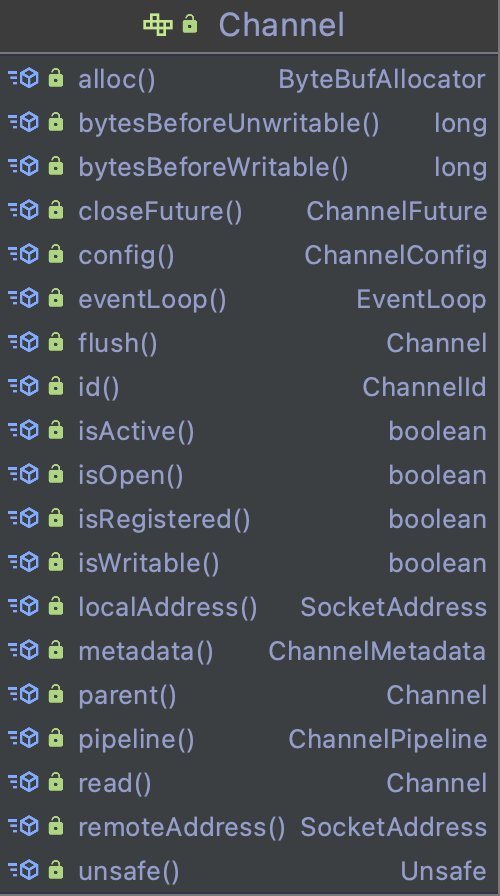 From the above figure, we can see that using Channel can determine the current state of the channel, configure its parameters, and perform I/O operations on it, and the ChannelPipeline related to the channel is used to process the IO requests and events associated with the channel.

The switching of the transmission mode requires only a small cost replacement.

Of course, if you are not satisfied with the existing implementation, you can also customize the core API.

We look at a simple custom Handler:

In the above example, we have defined how to handle received messages and exceptions. In subsequent articles, we will introduce the interaction between ChannelEvent, ChannelHandler and ChannelPipeline in detail.

In addition to the three core features mentioned above, netty has several other advantages to facilitate the development of programmers.

For the examples in this article, please refer to: learn-netty4

This article has been included in http://www.flydean.com/03-netty-architecture/