Before Dewu, all online ANR problems were collected and displayed on the Bugly platform. In the experience, it was found that whether it is the effectiveness of the information provided in solving the problem or the aggregation of ANR logs Doesn't meet the needs of the actual scene of Dewu. Therefore, after referring to the ANR monitoring and governance solutions shared by major manufacturers in the industry, we started to build our own internal ANR monitoring platform. This article mainly introduces the realization of the ANR monitoring platform part, and the collection of relevant information on the end will not be explained.

Before proceeding with the data processing of the ANR log, first sort out the information content currently collected and reported by the ANR, mainly including the following information

The following describes the processing of the above-mentioned key information.

ProcessErrorStateInfo is obtained through the getProcessesInErrorState() function of ActivityManager, and it mainly contains the following information

The main concern here is the information of longMsg. Through regular matching, the following key information can be parsed from longMsg

The analysis of the tombstone information of xcrash is also directly implemented using the code built in xcrash.

For the processed Message, the time spent executing the Message (wallTime) and the execution time allocated by the CPU (cpuTime) are collected. Based on these two times, you can roughly judge the scheduling of the main thread cpu, if there is a difference between the two The difference is large (cpuTime only accounts for less than 30% of wallTime), considering that there may be a serious thread scheduling preemption problem.

For unprocessed Messages, it is mainly used to observe the current Message scheduling delay, whether there is too much message backlog and other cases.

When the App is running, Dewu will collect the current execution stack of the main thread at regular intervals (50ms). A total of 10S~20S thread call stacks will be saved. When an ANR occurs, the collected stack information will be along with the ANR information. Reported.

By processing the collected stack in the background, the more time-consuming functions can be analyzed in advance. Here is a brief description of the analysis and processing methods for function sampling data

Part of the code 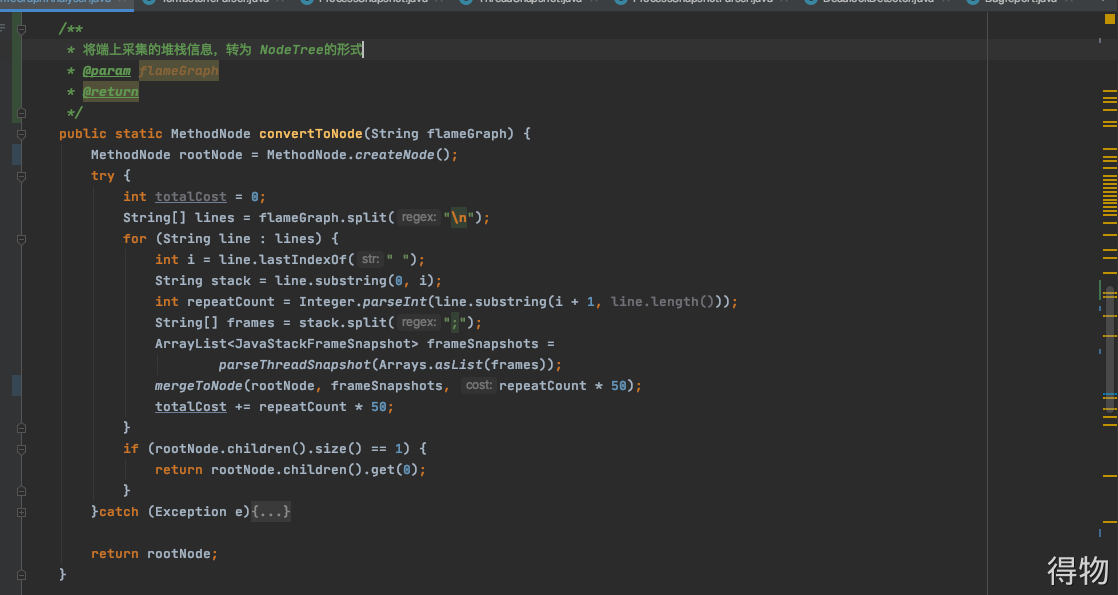 In the APM platform, for issue-type events, a very important processing link is the process of data aggregation. The ANR logs reported on the end also need to be aggregated, so that ANR problems can be better classified, the severity of ANRs occurring online for different problems can be evaluated, and centralized management can be carried out according to the severity.

In the production environment, there are many reasons for the occurrence of ANR in equipment. If it is simply classified, it can be divided into the following situations

In view of the ANR problem that may be caused by slow functions, through the "stack information analysis" link in the previous section, all in-app functions that take more than a certain threshold have been analyzed. Under certain conditions (main thread CPU scheduling is normal), you can follow time-consuming function to aggregate .

For other cases, we first simply ANR component + ANR trigger reason 161460d1177a97, first aggregate according to this relatively coarse granularity, and then analyze. If a certain rule is found, The platform can support some specific rules , custom aggregation capabilities for data aggregation.

This chapter shares the experience design of DEWU on platform functions for ANR issues. The focus is mainly on how to display the existing data and information to help developers better discover and locate problems.

For each reported ANR log, in addition to some general information (such as userId, sessionId, deviceOs, etc.), the focus is on the display of contextual information related to the ANR issue.

First, after the aggregation process, the ANR logs are divided into ANR ISSUEs, and each ISSUE has its own processing status and trend for problem management and problem trend follow-up.

In the application as a whole, a trend chart of the corresponding dimension is also provided to observe the current online ANR situation.

On the question list page, you can roughly understand how many questions there are in the current ANR, the trend and processing status of each question. When you click on each question, you will jump to the details page of the "aggregation question", which is more complete in the aggregation algorithm. In the case of (in actual scenarios, it is difficult to achieve the diversity of current causes of ANR), the details of each problem are ANR caused by a specific cause, or an ANR that occurs on a specific application component.

On the problem details page, you can also display the occurrence trend of the specific problem and the status of the problem handling, but more importantly, what key element information is provided by the platform to help developers locate ANR problems.

In each ANR ISSUE detail page, each ISSUE is a collection of logs reported by ANR, that is, ISSUE and Log, which is a one-to-many relationship. On the problem details page, you can view all the abnormal logs reported under the problem. , When you click on each exception log, you can view the detailed information of the log. In the log details section, the ANR platform displays all the information analyzed in the previous section, including the main thread Message traceback information, method trace information, and CPU usage of each process, etc., in a more friendly visual way. 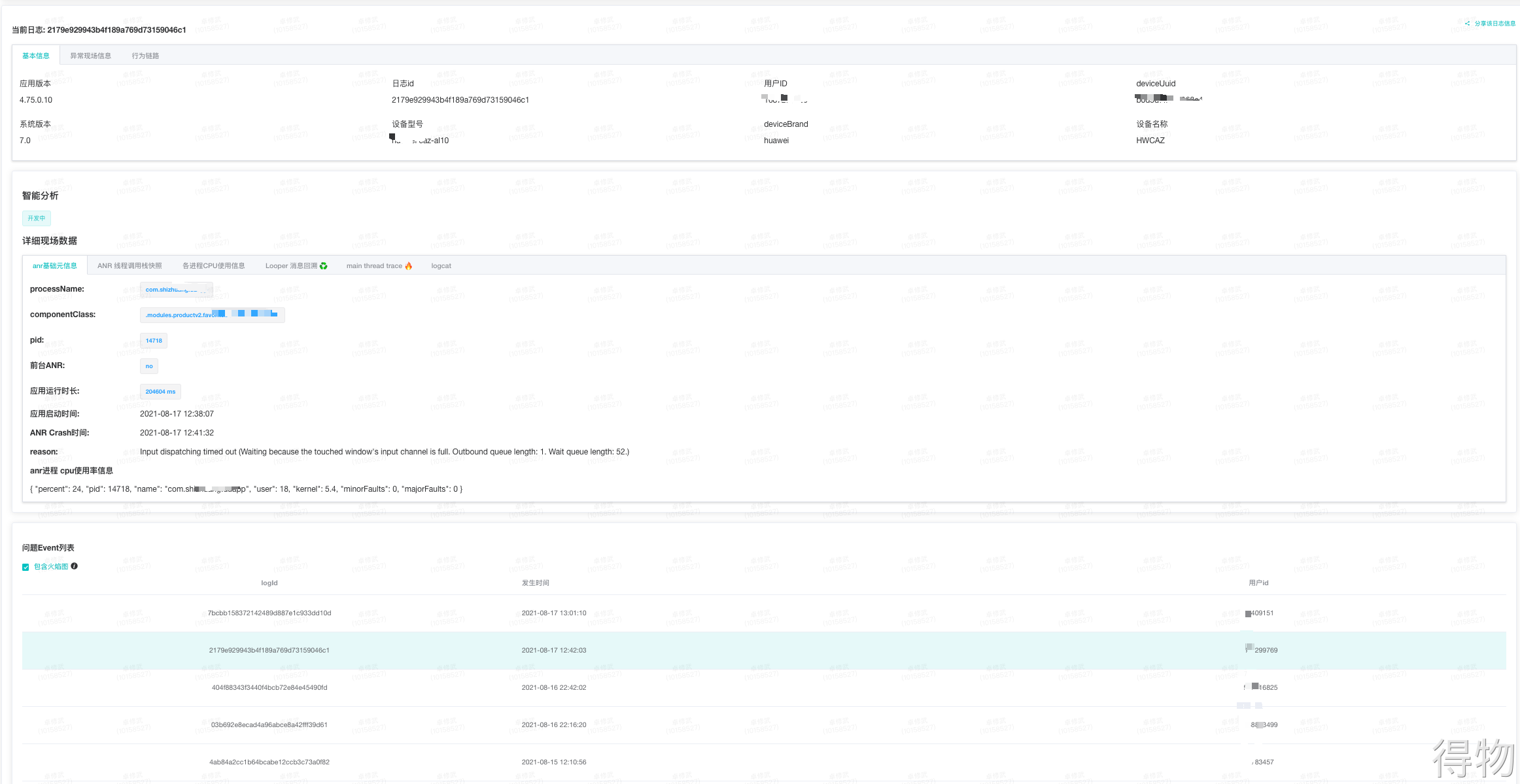 This is mainly to display the CPU usage information of each process collected on the end, and the usage rate is divided into user mode and kernel mode.

On-site information display of each thread during ANR

Thread scene information is mainly to check whether the main thread is likely to deadlock, and the running status of other threads, whether there may be too many other work scenes, and the current thread scheduling is affected. 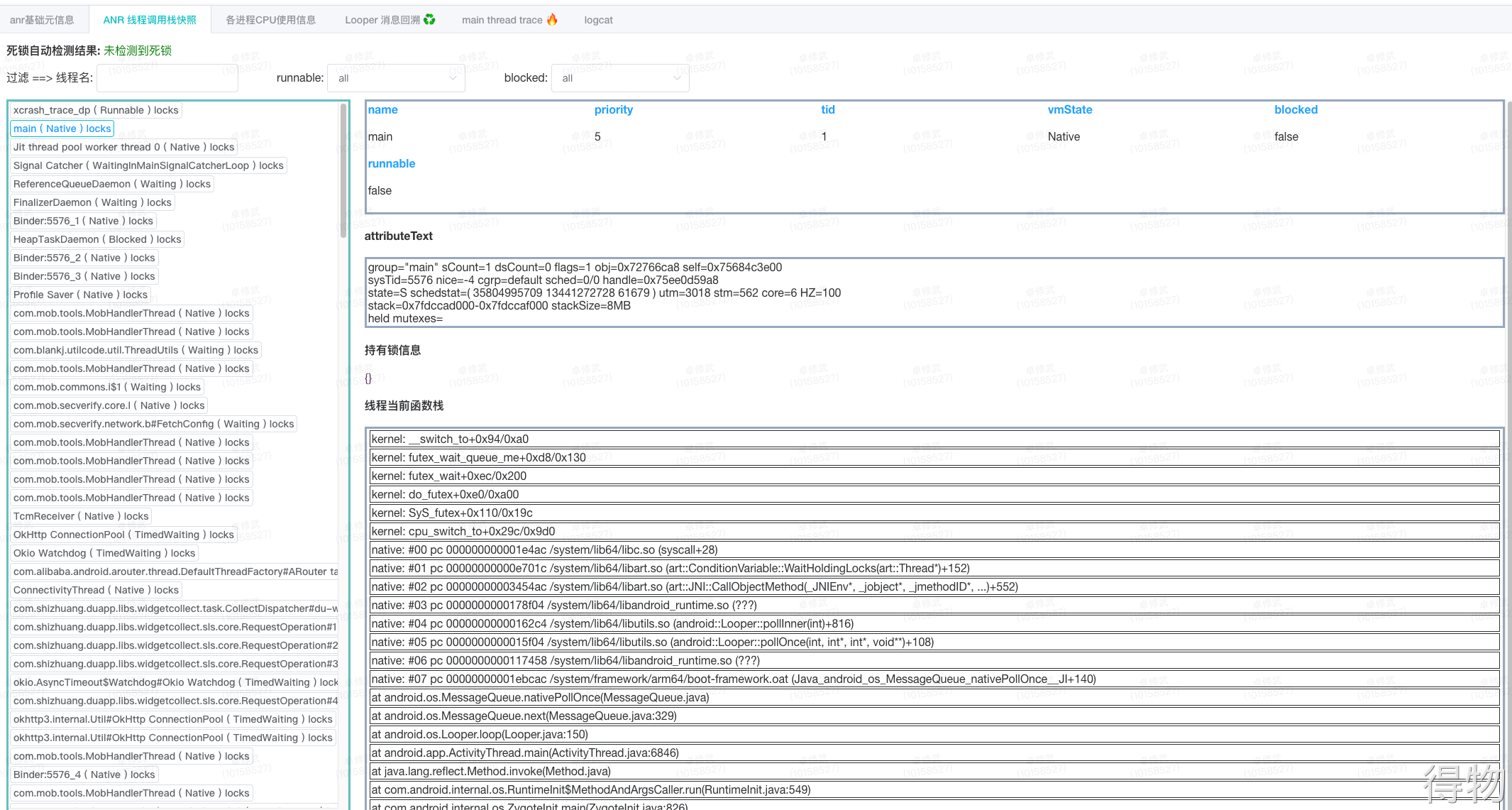 From the logcat information, you can assist in the verification and obtain some information before and after the occurrence of ANR, and sometimes the problem can also be located from the exception log in the logcat.

The flame graph can view the execution of the application function from a global perspective, and more intuitively analyze the function that may cause anr. 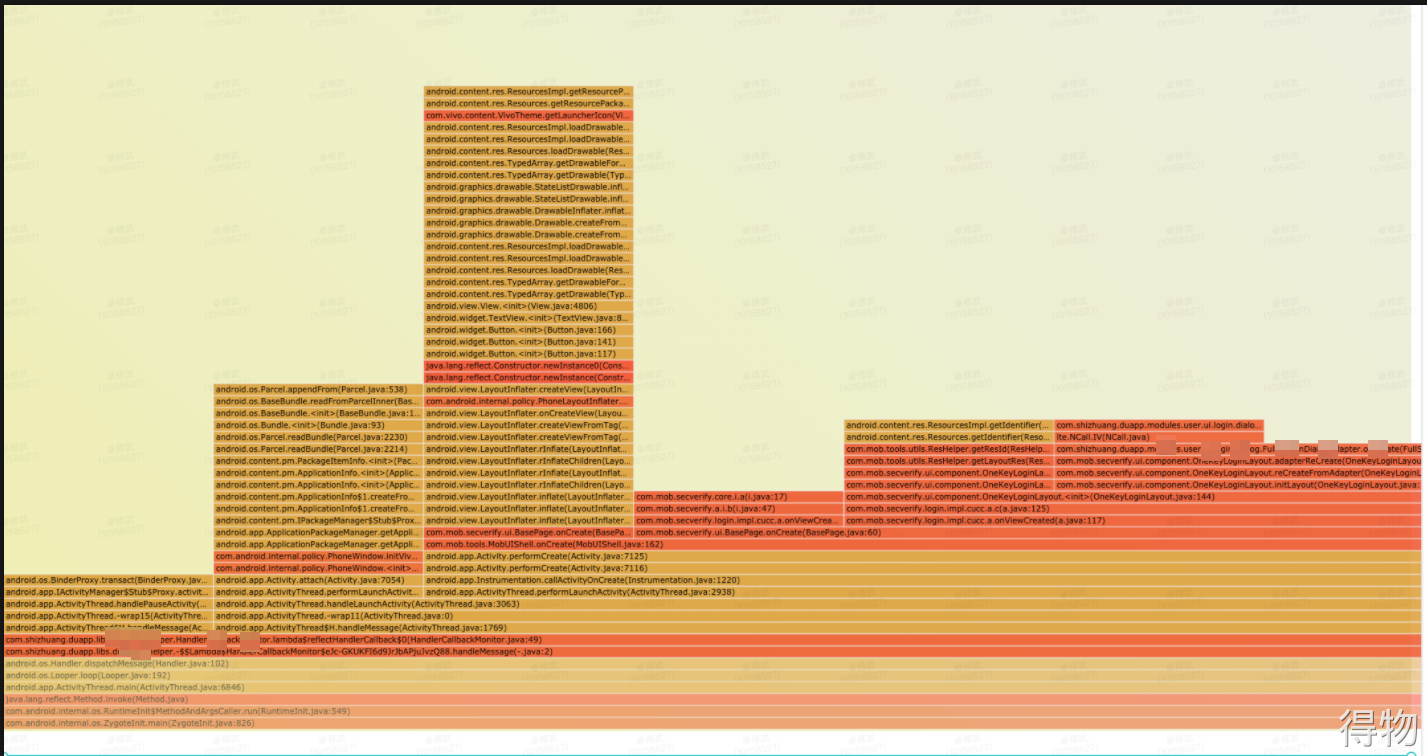 Simply put, through the existing platform, ANR problems can be analyzed from the following aspects

Part of the problem governance sharing

When investigating ANR logs, I found that there are multiple ANR logs, Kotlin's KfunctionImpl.toString is relatively time-consuming, the flame diagram case is as follows

So the Kotlin function was tested offline, and the scene was restored with reference to the business code in the flame diagram in the demo 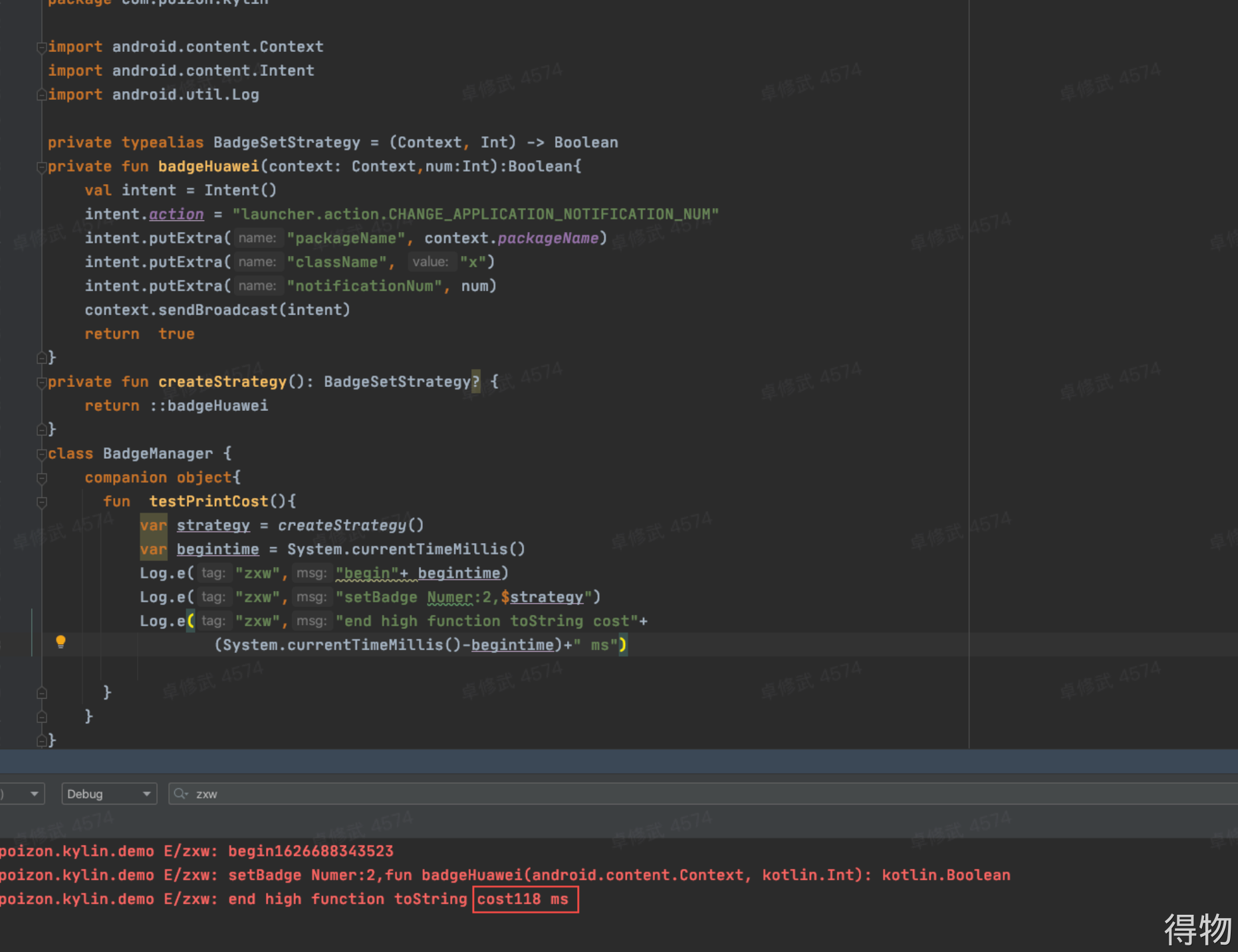 It turned out that a simple toString call took 118ms in the demo. After a series of variable tests, it is found that after the introduction of kotlin and the introduction of the kotlin-reflection library, it takes a very serious time to toString function of the Kotlin Function object. Therefore, pay attention to the business code, do not directly or indirectly trigger the toString operation on the Kotlin function object.

Turning to the corresponding method trace, it is found that the stutter is mainly caused by the drawingCache obtained from the Webview in the main thread.

When testing offline, the time-consuming function may not be so time-consuming under normal circumstances, so it is not yet certain how the problem is caused, but from the perspective of code implementation, it should not be executed in the main thread. Time operation, so the operation can be moved into asynchronous thread execution.

After the ANR platform went online, it was found that a large amount of data in the currently collected use cases was caused by the need to wait for the completion of all asynchronous SP write operations in the onPause, onStop and other related processes of the system components

Dewu’s current business has used MMKV to replace SP. The scenarios that mainly use SP are all connected third-party SDKs, and these SDKs generally do not need to write "asynchronous task data write completion" for this part of the data between component jumps. As a result, Dewu has performed a HOOK on the mechanism of this part of the system. After this part of the HOOK function is launched, the ANR rate has dropped significantly.

Judging from the current governance of the problems after the ANR platform is launched, most of the problems that are easy to solve are analyzed by analyzing the obviously time-consuming business code from the flame graph. In the actual online scene, there are still some In a specific case, the existing log information cannot clearly give the root cause of the occurrence of ANR. Later, according to each case, other aspects of monitoring capabilities will be strengthened to assist in locating the problem.

Enhancement of other contextual information collection

For example, it is found online that some time-consuming functions of ANR problems are stuck in a simple File.exist function call. For such problems, it may be necessary to combine some monitoring and hooks of the native layer on the file io operation to assist in locating the problem.

At present, the method of DEWU APP on the terminal is to call getStackTrace at the timing of the child thread through the Thread object of the main thread to collect. Although the execution of this function is in an asynchronous thread, it is acquired in a non-current thread at the bottom of the virtual machine. When the thread stack, the corresponding thread will be suspended first, and then resume after the acquisition is complete. Therefore, if the frequency of grabbing the stack for the main thread is more frequent, it will inevitably affect the execution of the normal function of the main thread. 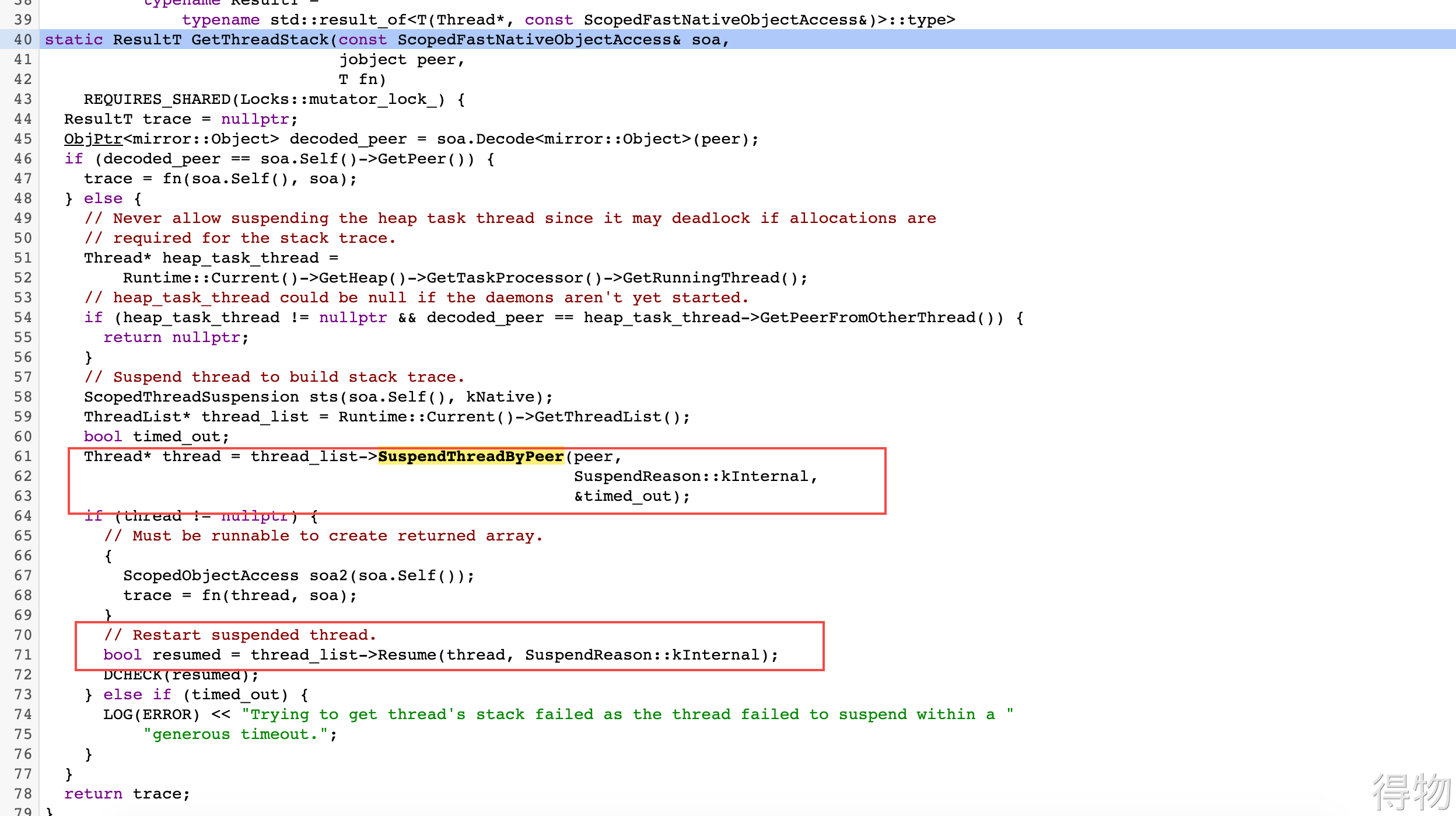 The requirement of our MethodTrace is to try our best to ensure that it only generates minimal runtime overhead to avoid affecting application performance for monitoring. Although the current sampling scheme has a minimum sampling interval of 50s, it has little impact on performance. In Facebook's profilo open source library, there is a set of asynchronous non-blocking access to the thread stack, but it is currently only open source compatible with Android 9 and below. 's watermelon video shared another 161460d1178595 Java Method Trace , but the solution ultimately requires a suspend thread, which also has a certain impact on performance, but it is also a reference direction for implementation.

At present, Looper Message Trace function and Method Trace (function execution flame graph) function are two relatively independent functions. When we find that a certain message in the Message Trace function is time-consuming, under normal circumstances, we hope to be able to directly see the specific message. What has been done, so an optimization that can be done in the platform test is that when a Message is clicked, the function stack fragment of the corresponding time is automatically intercepted according to the start and end time of the processing of the Message, and the information is displayed.

The Message information and function sampling information collected on the end actually include anr, because there is a certain time difference from anr triggering to application capture to collecting information, so from the perspective of problem analysis, this time point needs to be done An obvious distinction.

Pay attention to the material technology, be the most fashionable technical person!