p3c plug-in, how do you check out your shit mountain code?

Are you curious about all the techniques you use?

Although we are all called coders and we are all writing codes, because of the different requirements of the scenes, all kinds of coders also do different things.

Some people unify the specifications, some develop components, some write businesses, and some others do verification, but the more simple code farmers like CRUD, the more they use good things provided by others. One will install a plug-in, one will introduce a Jar package, and another will adjust other people's interfaces, and his own work is like an assembler, pieced together, and finished the product requirements.

It's broken, it may take a few years to do so, and there will be no technological breakthroughs. Because you are not curious about the technologies that are used, and don't want to know how they are implemented. Just like Ali's P3C plug-in, how did I check the code and analyze the crotch that I wrote?

Second, what is the P3C plug-in

P3C is the name of the plug-in project of the Alibaba Java Development Manual as the standard. It is an IDEA/Eclipse plug-in used to monitor code quality.

After the plug-in is installed, you can statically analyze the code appearing in the code in accordance with the programming protocol: naming style, constant definition, collection processing, concurrent processing, OOP, control statements, comments, exceptions and other potential risks. At the same time, some potential risks will be given. Optimize operations and examples.

When I first used this kind of code checking plug-in, I was very curious about how it found my shit mountain code. What kind of technical principles are used? If I can analyze whether it can also be used as a technical means Used elsewhere.

Before analyzing such a code checking plug-in, first think about checking the source code of IDEA plug-in to see what logic it is, and then analyze how to use it. In fact, this is similar to some other framework-based source code learning. Get the official website documents and the source code corresponding to GitHub, and follow the steps to build, deploy, test, debug, and analyze, and then find the core principles.

P3C takes IDEA plug-in development as an example. It mainly involves the plug-in part and the protocol part. Because it combines the ability of protocol checking with the plug-in technology, it will involve some IDEA-developed technologies. In addition, the P3C plug-in involves not only Java, but also a part of kotlin, which is a statically typed programming language that runs on the Java virtual machine.

When we looked down and read, we saw something about pmd. PMD is a static code checking tool for Java programs released under the BSD protocol. When using PMD rules to analyze Java source code, PMD first uses JavaCC and EBNF grammars to generate a syntax analyzer to analyze Java code in the form of ordinary text. It conforms to the grammar of the specific grammatical structure, and at the same time adds the concept of semantics, namely JJTree, on the basis of JavaCC. Through a conversion of JJTree, the Java code is converted into an AST, which is the semantic layer above the Java symbol stream. PMD treats AST as a symbol table. Then write PMD rules, a PMD rule can be regarded as a Visitor, by traversing the AST to find a specific pattern between multiple objects, that is, the problem of the code. This software has powerful functions and high scanning efficiency. It is a good helper for Java programmers to debug. 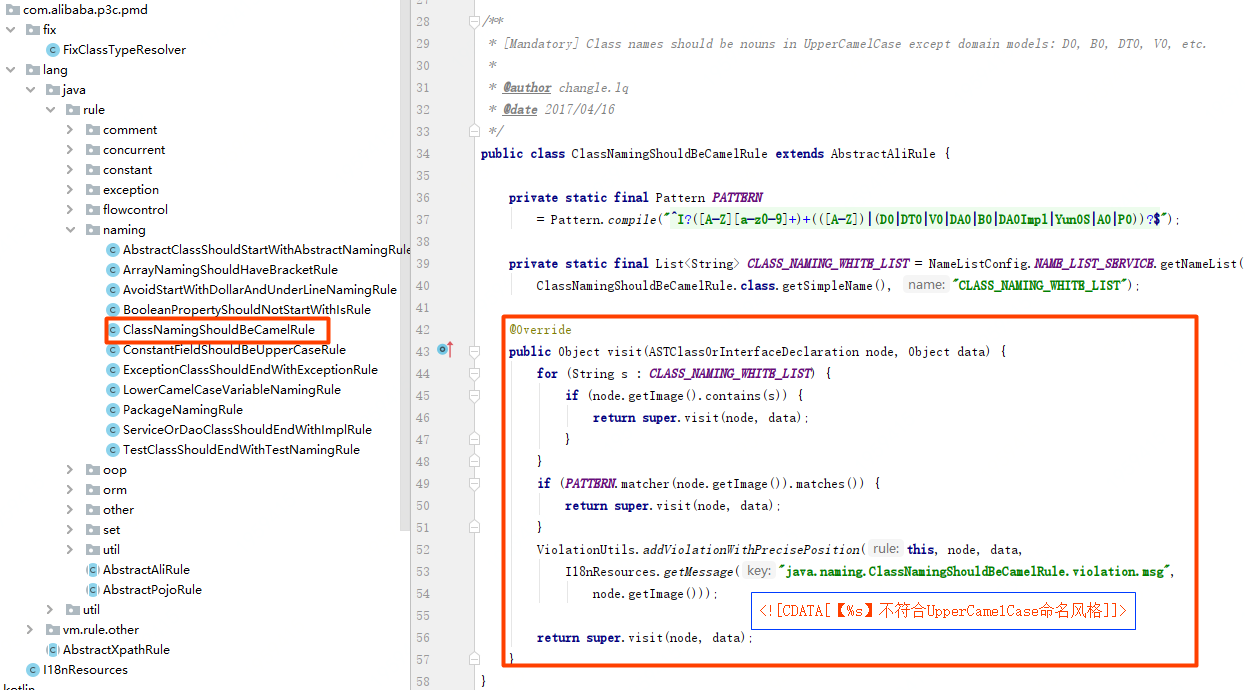 To be reasonable, say a thousand words and ten thousand, and you have to take out the code and run it to know what PMD looks like.

This is a test project similar to p3c-pmd. It handles its own code review standard processing by extending and rewriting the code monitoring protocol by itself.

In fact, with the PMD static code inspection protocol, there are many things that can be done. Not only the code being written is inspected, but also the code at different stages can be analyzed and risk reminders, such as: preparation for the test phase, has been online completed, Corresponding monitoring and processing can be done.

And Sonar is one such tool. It is a web system that can display the results of static code scanning, and the results can be customized. The principle of supporting multiple languages is its extensibility. https://www.sonarqube.org/