The horse-drawn cart algorithm is actually not difficult!!!

Give you a string s and find the longest palindrome substring in s.

This is a wonderful algorithm, invented by a man named Manacher in 1957, so it is called Manacher‘s Algorithm . It is mainly used to find the longest palindrome substring of a string. The biggest contribution of this algorithm is to increase the time complexity to linear , The time complexity of the dynamic programming we mentioned earlier is O(n 2 ). 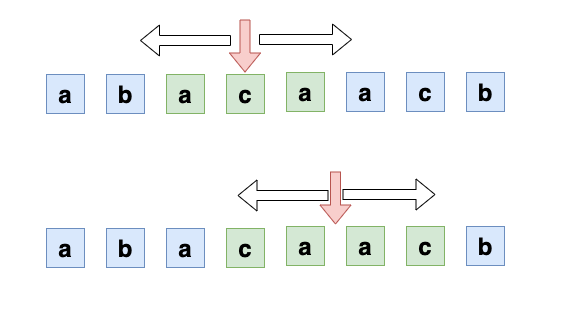 In order to solve the above said center gap may be the problem, we insert "to each character gap # ", in order to allow expansion of the end of the boundary more clearly, border the left into the " ^ ", insert the right side of the border " $ ":

For example, P[8] = 3 , which means that you can extend 3 characters on both sides, that is, the length of the palindrome is 3 , and the string after # aca :

Assuming that we already know the array P, how do we get the palindrome?

With P subscripts index , subtracting P[i] (i.e. palindromic string length) can be obtained at the beginning of a string of characters in the string palindrome after expansion S the subscript, divided by 2, can be obtained in the original string The subscript is out.

So the question now is: How to solve the array P[i]

In fact, the key to the horse-drawn cart algorithm is: It makes full use of the symmetry of the palindrome and uses the existing results to help calculate the subsequent results.

Assuming that the largest palindrome at the character index position P has been calculated, the left boundary is P L , and the right boundary is P R :

So when we ask because a position i time, i less P R , in fact, we can find i on P symmetrical point j :

But there are two problems here:

(1) The previous palindrome string P refers to the on the right edge calculated earlier, because it is most likely to cover the i-centered index we are calculating now, so it can be reused as much as possible Symmetry of previous results.

Because of this, when we calculate, we need to keep updating the center and right boundary of P for every calculation.

(2) The special case is that the calculation of the longest palindrome string of current i can no longer use the symmetry of point P, for example:

The solution to this situation is: the excess parts need to be expanded one by one according to the central expansion method.

The specific code implementation is as follows:

As for the complexity of the algorithm, the space complexity uses an array of size n, which is O(n), and the time complexity, which seems to use two loops, is not O(n 2 ), but O(n) , Because most index positions will directly use the previous results and symmetry to obtain the results, and the results can be obtained at constant times, and those that require center expansion are beyond the coverage of the previous results, so they need to be expanded and expanded. , Which is conducive to the calculation of the next index position, so the expansion is actually less.

[Profile of the author] :
Qin Huai, Qinhuai Grocery Store ], the road to technology is not at a time, the mountains are high and the rivers are long, even if it is slow, it will never stop. Personal writing direction: Java source code analysis, JDBC , Mybatis , Spring , redis , distributed, sword refers to writing a series of offers, every article in the series of LeetCode , I cannot guarantee that what I have written is completely correct, but I guarantee that what I have written has been practiced or searched for information. I hope to correct any omissions or errors.

refers to all offer solutions PDF