It has been more than three months since the official release of HarmonyOS 2.0. The latest data shows that more than 100 million devices have been upgraded to the HarmonyOS operating system. However, for the majority of application developers, HarmonyOS seems to be no different from Android. It is more about adapting or migrating some original functions. Regarding the core technology highlights of -1616508530a102 distributed soft bus , it is still unclear how to implement it, let alone how to integrate it with its own business.

On the supply side of the 1688 live broadcast domain, we have been constantly exploring how to improve merchants’ launch capabilities and reduce their launch costs. After learning about the characteristics of the distributed soft bus, we found that these capabilities of HarmonyOS are very suitable for the 1688 merchants’ multi-device launch requirements, so We have developed this multi-device launching program combining distributed soft bus.

In this article, I will combine business scenarios from a technical point of view to share 1688 live broadcast supply side is based on the distributed soft bus technology of HarmonyOS to realize the coordinated broadcast of multiple devices, helping 1688 merchants to reduce the cost of launching and improve the ability of launching.

Different from the usual mobile phone broadcast, our solution involves multiple devices and multiple screens. In addition to recording the anchor, you can also connect additional cameras to record products, display live data and previews on a large screen, and interact with the anchor on the large screen. Function. Let’s learn about the implementation effects of our technical product solutions through a video, please click on the following link to view the video:

1688 is the leading B2B e-commerce platform in China. The customers we serve mainly include factory owners, Taobao sellers, physical shop owners, stall merchants, etc. Due to the shrinkage of offline physical businesses due to the epidemic, more and more factories and stall owners are seeking to transform online live broadcast delivery. With the development of our business, this year we have also incubated an app specifically for merchants—1688 Merchant Edition. , To provide merchants with more professional services, including live broadcast, negotiation, workbench, etc. The practical case in this article is exactly in the 1688 merchant version live broadcast domain scene .

Unlike Taobao live broadcasts, most of the anchors are professional MCN teams invited by merchants. Most of the 1688 live broadcasts are the merchants themselves. They treasure their own goods, but they lack professional broadcast capabilities and equipment for e-commerce live broadcasts. How to help merchants lower the threshold and improve the quality of launching under the premise of investing limited resources in 1688 merchants? Through offline visits to merchants, we found several common issues related to launching. 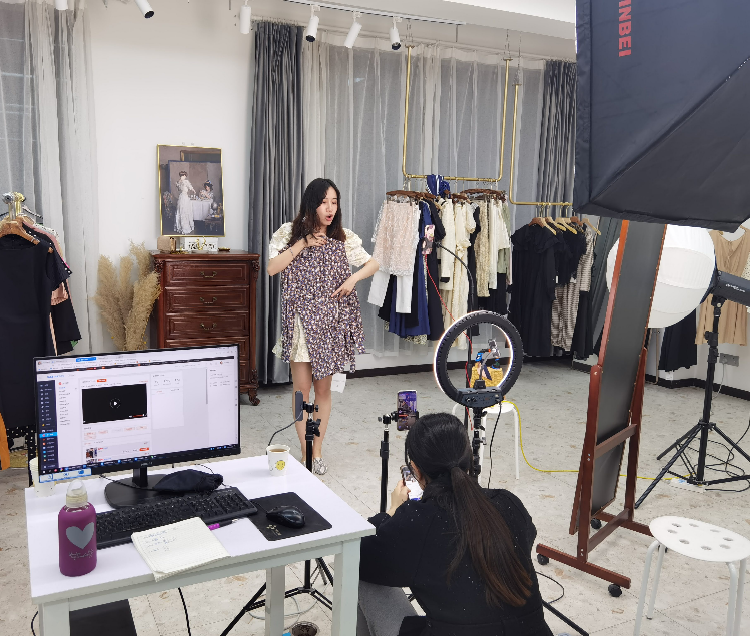 host interacts with a single device for co-broadcasting 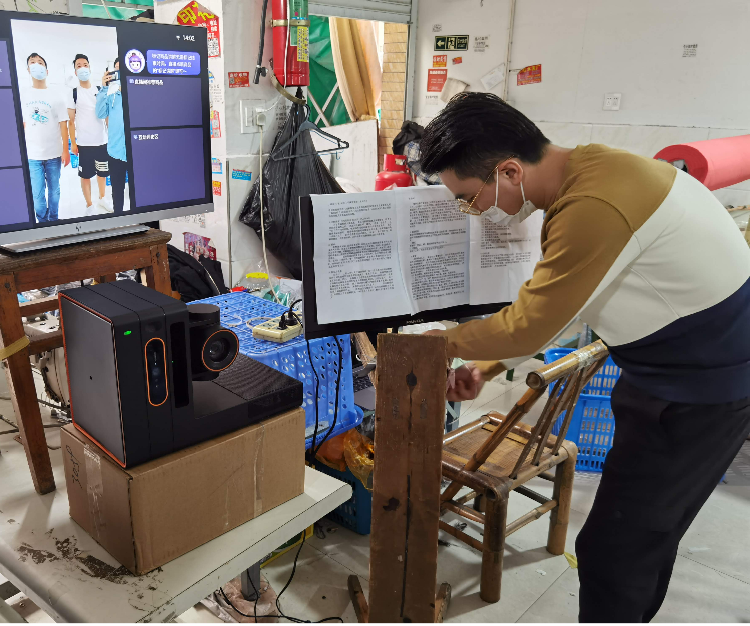 factory environment is simple and portability is difficult

2. is difficult to collaborate between live broadcast devices

Does the existing equipment meet the merchants' large-screen and multi-camera, collaborative interaction between devices, and portable low threshold ? Let's compare their characteristics first:

Selection and comparison of broadcasting equipment:

tool provided to merchants for live broadcasting needs to have 1616508530a44f multi-device coordination, large-screen interaction, few connection lines, configurable hardware, and cost-effective . So, is there a start-up program that meets these advantages at the same time?

At present, many anchors in our App are HarmonyOS users. For small and medium businesses that already have HarmonyOS devices, we have proposed a multi-device collaborative broadcast solution based on a distributed soft bus. 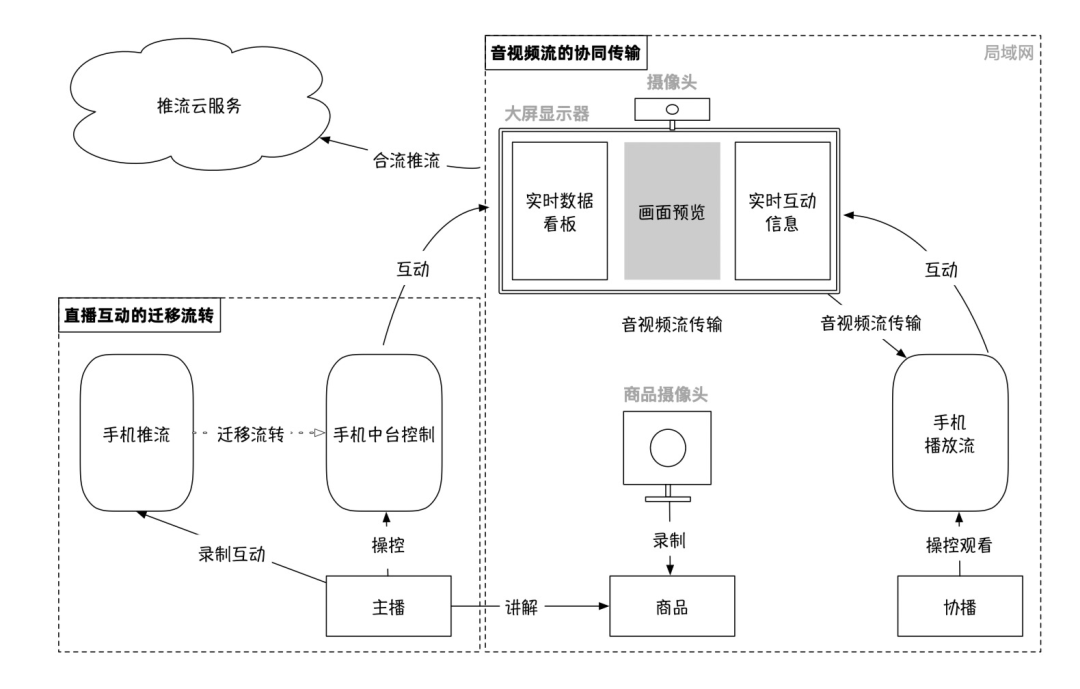 The program also has the advantages of the above-mentioned launch tools:

The core technical capabilities to achieve the above products program is a live interaction dynamic migration flow and cooperative transmission of audio and video streams , both underlying technical capabilities are based on HarmonyOS distributed software package on our bus expansion project . Next, let me briefly introduce the distributed soft bus.

Distributed bus is a concept proposed by Huawei Hongmeng. Its inspiration should come from computer systems. In the computer system, the common channel for transmitting information between CPU, input and output devices is called a bus. The soft bus is to establish a virtual communication connection between multiple devices to complete the interconnection and intercommunication between multiple devices without physical line connection, so that the information transmission function between devices with low latency and high bandwidth makes it possible for each device to be wirelessly realized. Efficient data transmission.

From the above architecture diagram, we can see that the distributed soft bus encapsulates a variety of communication protocols, and uniformly encapsulates the discovery, connection, and transmission of devices into an externally transparent interface. Developers only need to make a simple call. The interconnection and intercommunication between multiple devices do not need to care about the details of Unicom.

The live interaction in our scheme is based on the distributed soft bus to realize the multi-device migration and circulation. The audio and video streams are also transmitted across devices through the soft bus channel. The following is a detailed introduction to the realization of the capabilities of these two technical products.

3.1 Migration and circulation of live interaction 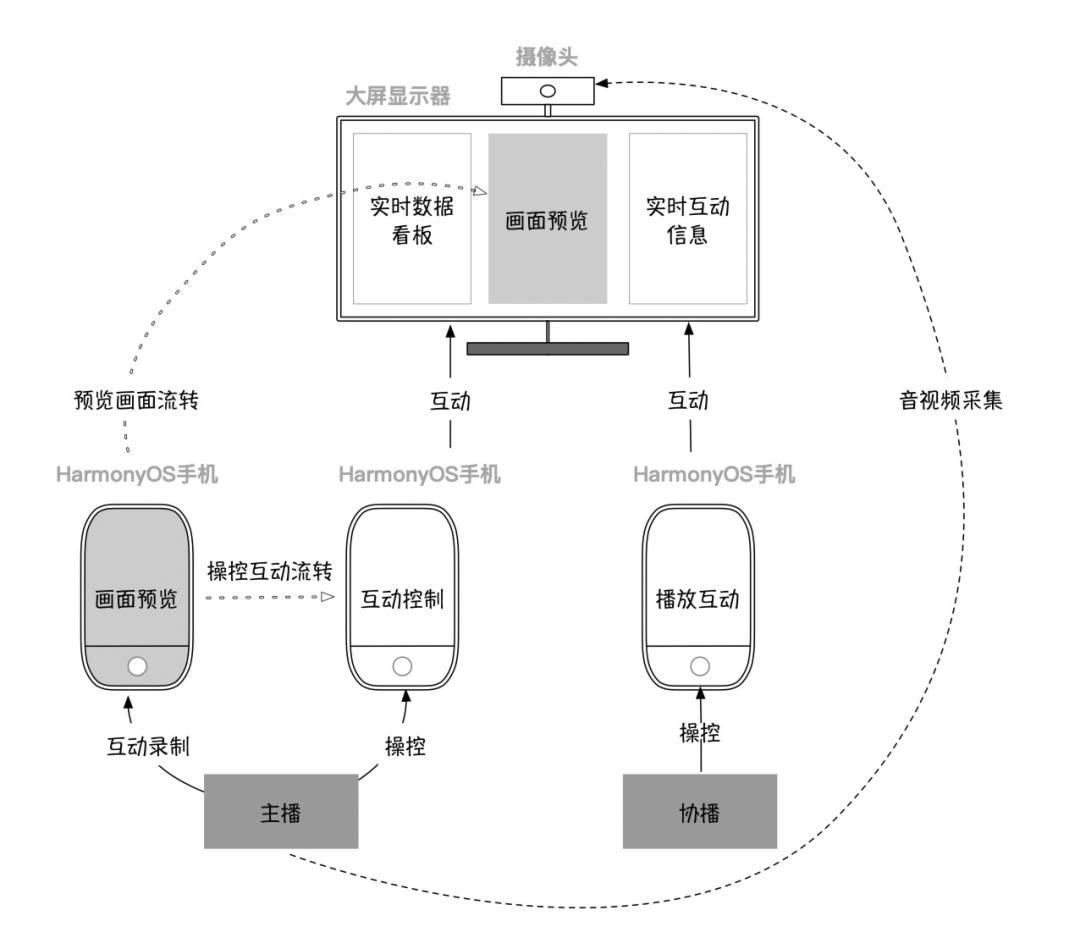 There are three main functions of live interaction migration and circulation on multiple devices:

The host App first discovers and connects to the nearby big screen, and then seamlessly transfers the live data FA and real-time interactive FA to the big screen device. The host App jumps to the start-up control FA. The host App can operate the big screen and coordination through the middle station control. Broadcasting App, the interaction between devices is realized through IDL communication. It should be noted that the apps of the above three devices are based on the newly added capabilities of the original project transformation, and the three are the same App.

Let's take the anchor app evokes the big-screen app and jumps to the middle station control as an example: 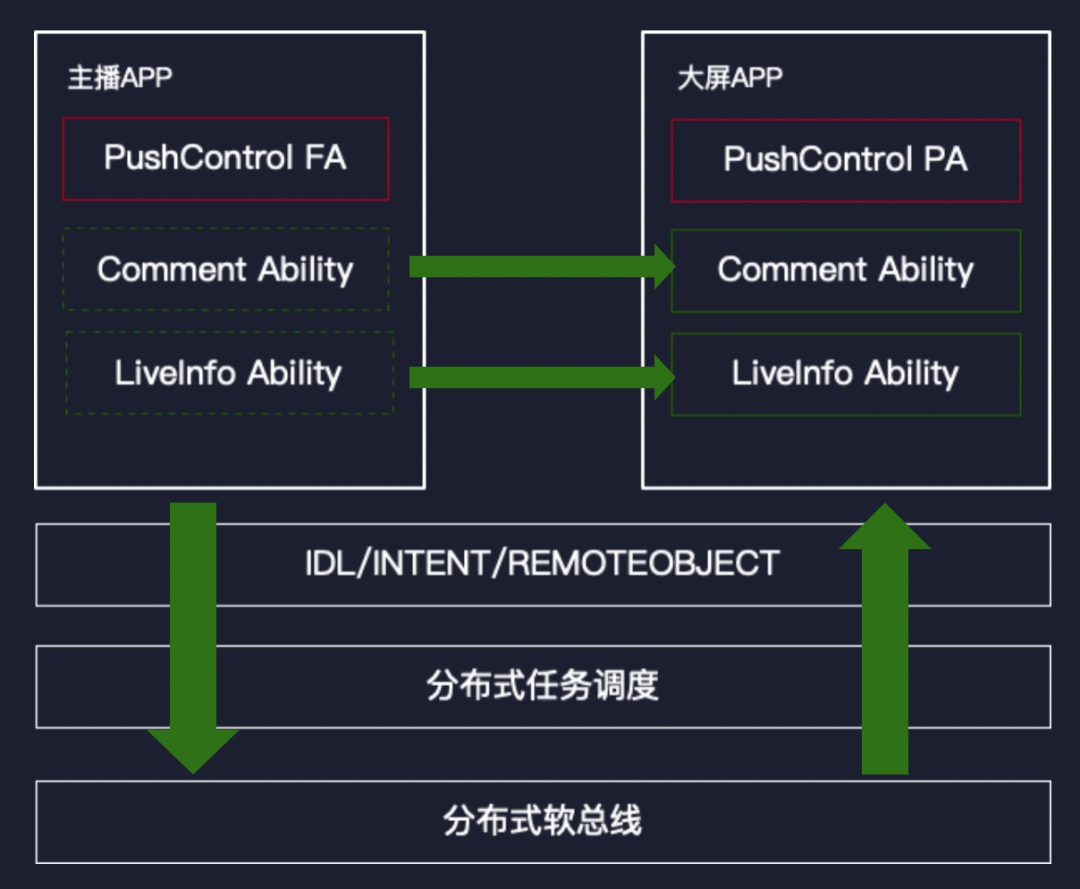 1. Register the transfer equipment at LiveControlAbility;

2. After the ContinuationDeviceCallback connects to the connected device successfully, call connectAbility to evoke the large-screen PA ScreenServiceAbility and pass relevant parameters;

4. ScreenRemoteForController inherits from HarmonyControllerInterfaceSkeletonScreen and initializes after the OnConnect callback, and receives instructions sent from the host App, such as awakening other devices, and then distributes events through EventHandler.

At present, all of our functions are incremental development of HarmonyOS on the original Android project, and then mixed packaging. The function development here is limited by the fact that there are still many basic libraries that have not yet completed the migration and adaptation of HarmonyOS, and the compatibility and communication between HarmonyOS and Android.

There are four main functions of coordinated transmission of audio and video streams across devices: 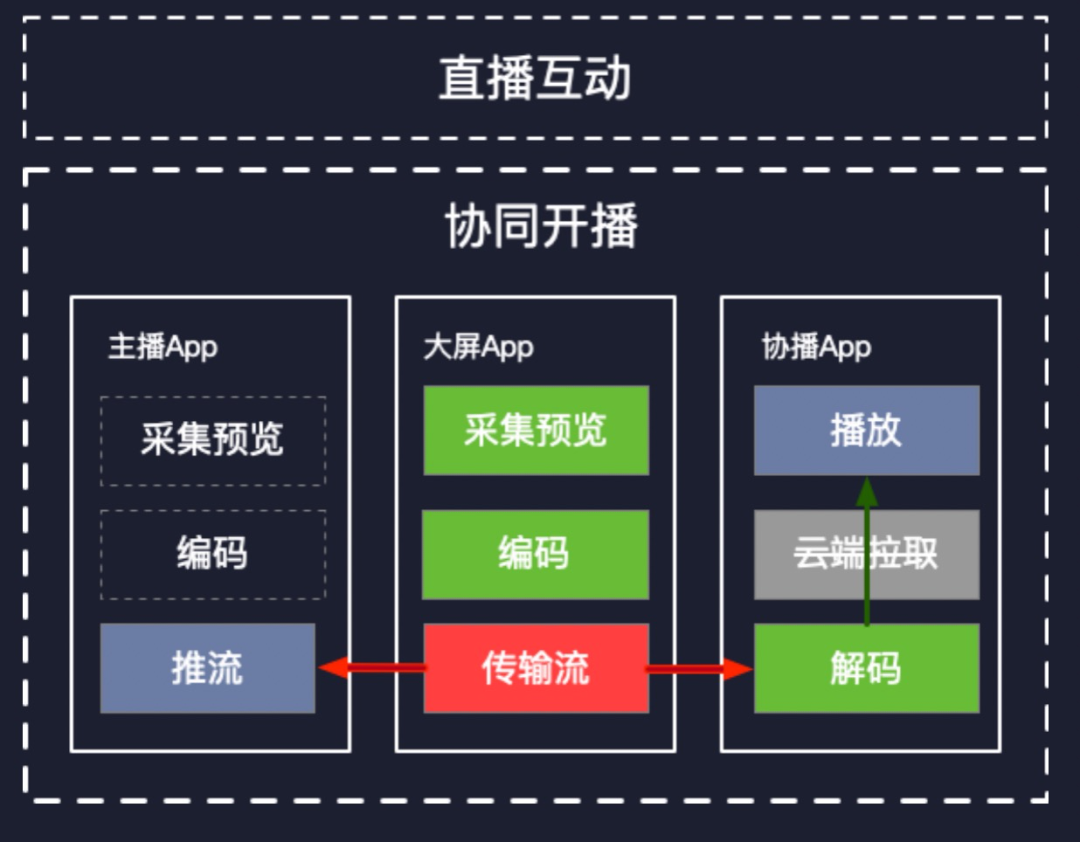 Let's take the example of collecting audio and video and transmitting it to the large screen after the commodity camera is awakened:

1. When the commodity camera is awakened, the SurfaceProvider is first initialized, and the background ScreenServiceAbility service is connected in its surfaceCallback callback, and the camera is turned on at the same time;

3. Take the video data collected by the commodity camera as an example, encode the YUV data format and send it;

4. Slice the converted YUV video frame data and then send it through the ScreenService background service;

5. The large-screen device receives the audio and video data sent by the commodity camera, decodes it and plays it.

Different from the traditional local encoding push, the audio and video streams between devices in this solution are all transmitted in the local area network. Due to the limited bandwidth of the distributed soft bus and the large video data, we use the YUV data to encode the local video stream. Decoding, 720P video stream transmission is achieved through the method of slicing and merging.

HarmonyOS equipment networking needs to be based on prerequisites, including the same WiFi, turn on Bluetooth, and temporarily only support logging in to the same Huawei account. The reason for the harsh conditions I think is mainly due to security considerations, but in our scenario, the devices are all services For the same live account, it is reasonable to log in to the same Huawei account and start the broadcast scene.

Our plan has the following three characteristics:

Distributed soft bus is the unique ability of HarmonyOS operating system. The biggest disadvantage of the current solution is that it cannot be implemented on mobile phones with other operating systems, so only users of HarmonyOS have this ability. In the future, we will explore the implementation of similar functions on Android and iOS. At the same time, we hope that our practice of multi-device collaborative broadcasting in e-commerce live broadcasts can inspire more technical products to use distributed soft bus capabilities to land business scenarios.

Based on our deposited live interactive migration and audio and video collaborative transmission two major technical capabilities, we will further explore in these two directions in the future

Our current solution is mainly the development of software applications and does not involve the development of hardware. Therefore, the camera and large-screen device capabilities required in actual use are completed by the mobile phone of HarmonyOS. If we have the camera and projection screen for burning OpenHarmony The box will further reduce the cost of merchants and enrich the ability to start broadcasting. With the development of the era of 5G and the Internet of Everything, the prospects within sight are still very broad.

Follow us, 3 mobile technology practices & dry goods for you to think about every week!