🎙️7 minutes to read this article

This article will detail the test results of Pulsar and Kafka (red content in the figure below). The Fsync state is a variable in the experiment. In addition, in order to better compare the two, the tester also adjusted the number of partitions. For each workload, there are two graphs for reference: one graph is the p99 release delay during the test, and the other graph is the average end-to-end delay. In addition, these two figures are accompanied by a table that summarizes the delay measurement values during the test period and organizes them to provide delay distribution data.

All tests use 100-byte messages. During the 15-minute test, only two client (production and consumption) servers were used, and the production rate and consumption rate were constant at 50,000 messages per second. The Apache Pulsar version used in the test is 2.4.0.

Delay test when fsync is turned on 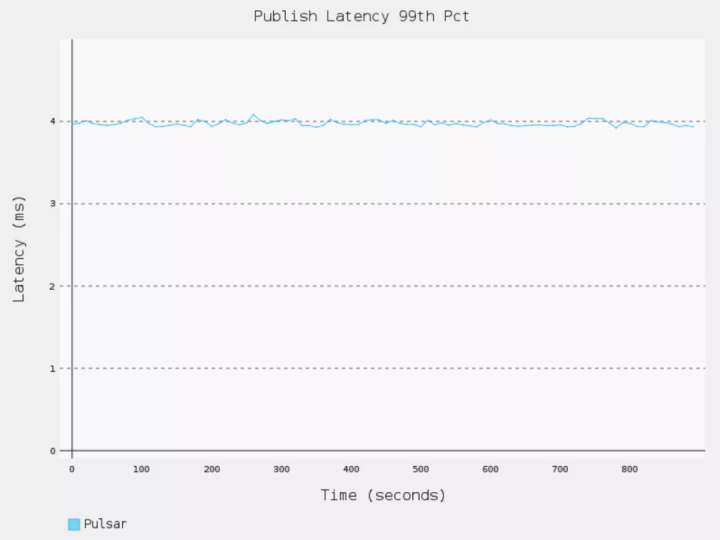 Delay test when fsync is turned off

Except for setting journalSyncData=false in the bookkeeper.conf file to disable refreshing each message to disk, and restarting Pulsar broker and BookKeeper, the other test conditions are the same. Disabling Flush will lose some durability, so when using Apache Pulsar, from a latency point of view, disabling Flush is not beneficial.

Since Kafka turns off Flush by default, we will conduct this test first. Like the Pulsar test, all tests use 100-byte messages, the message rate is 50,000 messages per second, and only two clients are used. Delays were recorded during the test and organized into a table. The Apache Kafka version used in the test is 2.11-2.3.0.

Delay test when fsync is turned off Delay test when fsync is turned on

Except for enabling each message refresh (fsync) and configuring each topic in the test (flush.messages=1, flush.ms=0), the test conditions are exactly the same as before. The default mode of Pulsar is to enable Flush. The results of this set of comparative tests show that Pulsar performs better. In the 1 partition test, Kafka performed better when Flush was not enabled. When both were set to enable Flush, the average latency of Pulsar was 2.969 milliseconds, while the average latency of Kafka exceeded that of Pulsar, which was 6.652 milliseconds.

When Kafka is configured to enable Flush, there will still be a large release delay peak, but the frequency is not high.

Based on the above test results, the summary is as follows: For latency-sensitive workloads, Pulsar performs better overall. Pulsar can guarantee consistent low latency and strong durability. Of course, not all workloads are sensitive to latency. In order to increase throughput, it may be necessary to bear the cost of higher latency.

Want to keep abreast of Pulsar's R&D progress, user cases and hot topics? Come and pay attention to Apache Pulsar and StreamNative WeChat public accounts, we will share everything related to Pulsar here for the first time. Click on the link to view the English original