JavaScript WebGL After using the image some questions arise.

Why can you get the image content by taking a few points of texture coordinates? 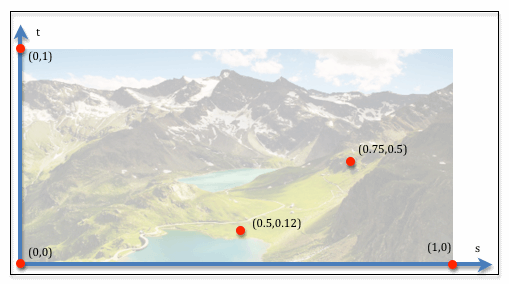 According to the above information, the texture coordinates are related to the drawn vertices, and the way of drawing the vertices also affects the acquisition of textures.

I tried it, for example, 4 vertices, but only the texture coordinates corresponding to 3 vertices are provided, and the following prompt appears:

But the number of redundant vertex coordinates has no effect.

Is there a requirement for the order in which textures are activated and texture targets are bound?

gl.TEXTURE0 to see the difference without using the default texture unit 061dcd69f7a902:

It can be found that the texture needs to be activated first and then bound to .

It should also be noted here that the texture will be bindTexture once, but this does not necessarily take effect in the end. It is best to bind it again when using it to be on the safe side. See some examples to separate the logic of creating and using textures.

What about multiple textures in the same location?

Earlier we know that the texture has its own texture unit. When drawing, the corresponding texture unit needs to be activated. Then there is the following situation:

A set of vertices, but associated with multiple texture units

This situation is easier to predict, after all, a single texture unit is finally specified, and the last specified will be drawn, which is example .

But what if there is an image with a transparent area in it? This is example , first using a cat picture texture, then use texture dog pictures, dog picture and the background is transparent, eventually shows only dog pictures.

Two sets of vertices in the same position, associated with their respective texture units

This is example , only to find a final set of vertices corresponding texture image.

example of the image 161dcd69f7aa94 containing the transparent area, the result is only the texture image corresponding to the last set of vertices.

Inferred from the above test: by default, texture images of the same vertex do not retain the texture image data used in history.