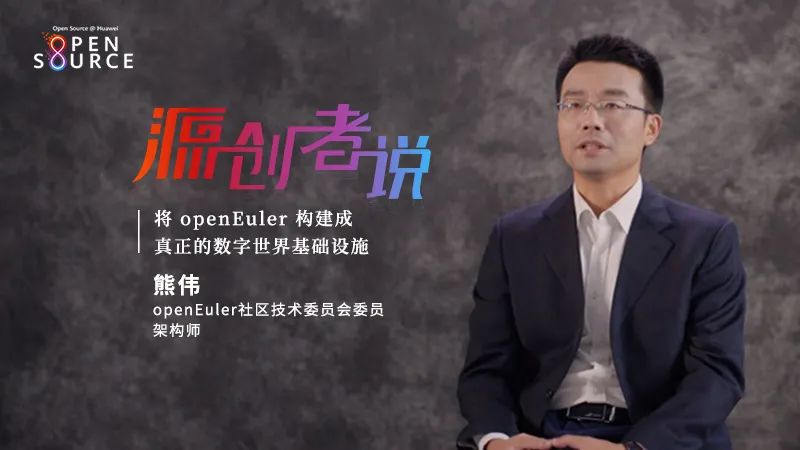 Xiong Wei, graduated from Nankai University, doctor of engineering, has participated in operating system development in TurboLinux, WindRiver and other companies. He joined Huawei in 2014 and is currently the chief architect of the server operating system of the Central Software Institute of the 2012 Laboratory, a member of the openEuler Technical Committee, and one of the main founders of the openEuler community.

From operating systems to digital infrastructure, openEuler creates a diverse and open ecosystem

Compared with "software" in the traditional sense, the operating system is more similar to a platform system, providing users with a variety of software to meet diverse needs. Because of this, Xiong Wei believes that "the process of building openEuler is very similar to building a large chain shopping mall. The value of the shopping mall is not in the shopping mall itself, but in the rich and colorful services inside, such as catering, entertainment, movies, etc., these colorful services. This makes shopping malls a place that everyone likes to go to. By analogy, the importance of an operating system platform such as openEuler also lies in the variety of hardware and software systems on it. The goal of openEuler is to continuously attract various manufacturers to settle in and continuously launch Various services continue to enrich the application of the operating system, and at the same time, it continuously absorbs various users, and continuously improves itself in the continuous feedback of users, so as to finally establish a complete industrial ecosystem."

Today, digital infrastructure is developing in the direction of the Internet of Everything, and scenarios such as cloud, edge, and IoT have become new battlefields for openEuler. Different from the past, these new scenarios need to face the ecological needs of more openness, multiple hardware platforms and architectures, and more emphasis on device-cloud collaboration. Xiong Wei believes that in the future, openEuler needs to comprehensively upgrade the organizational form of the community and the overall technical architecture to meet the challenges brought about by the continuous expansion of the community, and to expand the operating system architecture from focusing on server, cloud and other scenarios to IoT, embedded , edge computing and other new scenarios. 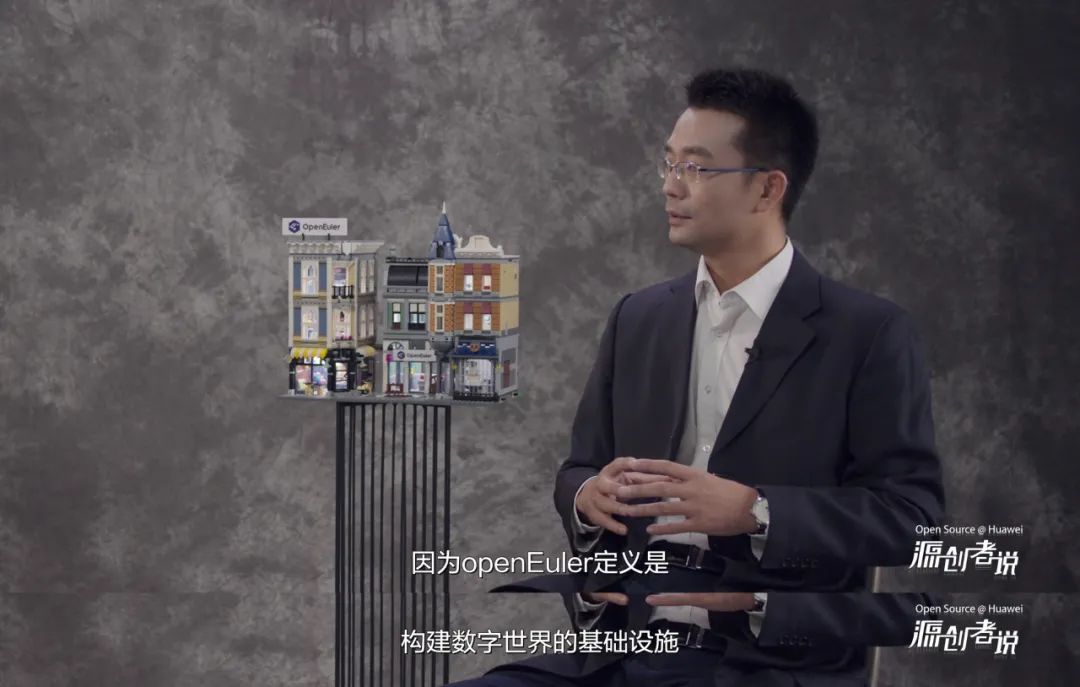 "As a digital infrastructure, openEuler will be more open in form, attracting more manufacturers, users and developers to participate in it, and jointly build openEuler into the base of the digital world." Xiong Wei is full of confidence in the future of openEuler.

Through multi-core support, openEuler can not only cover more business scenarios, but also help different scenarios have a unified development view and a unified development interface, making it easier for software to be migrated on different systems. Achieve better end-to-end, edge-side and cloud-side collaboration, greatly improving development efficiency. Based on the openEuler platform, the same application can be seamlessly migrated in many scenarios such as cloud, edge, IoT, Internet of Vehicles, and industrial parks. This capability will greatly reduce the development threshold and create basic conditions for a prosperous application ecosystem.

Xiong Wei believes that in addition to some hard-core technologies in the openEuler community, the core competitiveness of openEuler is also reflected in the "soft" power of the community. In Xiong Wei's view, the core goal of the openEuler community is not just to produce one or two finished software products, but to create an organizational structure that can achieve a virtuous cycle and sustainable development, establish a set of complete process specifications, and continue to provide the industry with Talent output. When the elements of organization, process, and talent are built, and supplemented by an excellent community culture, openEuler will be able to continuously produce high-level software that meets market demand, and even hatch world-class software. 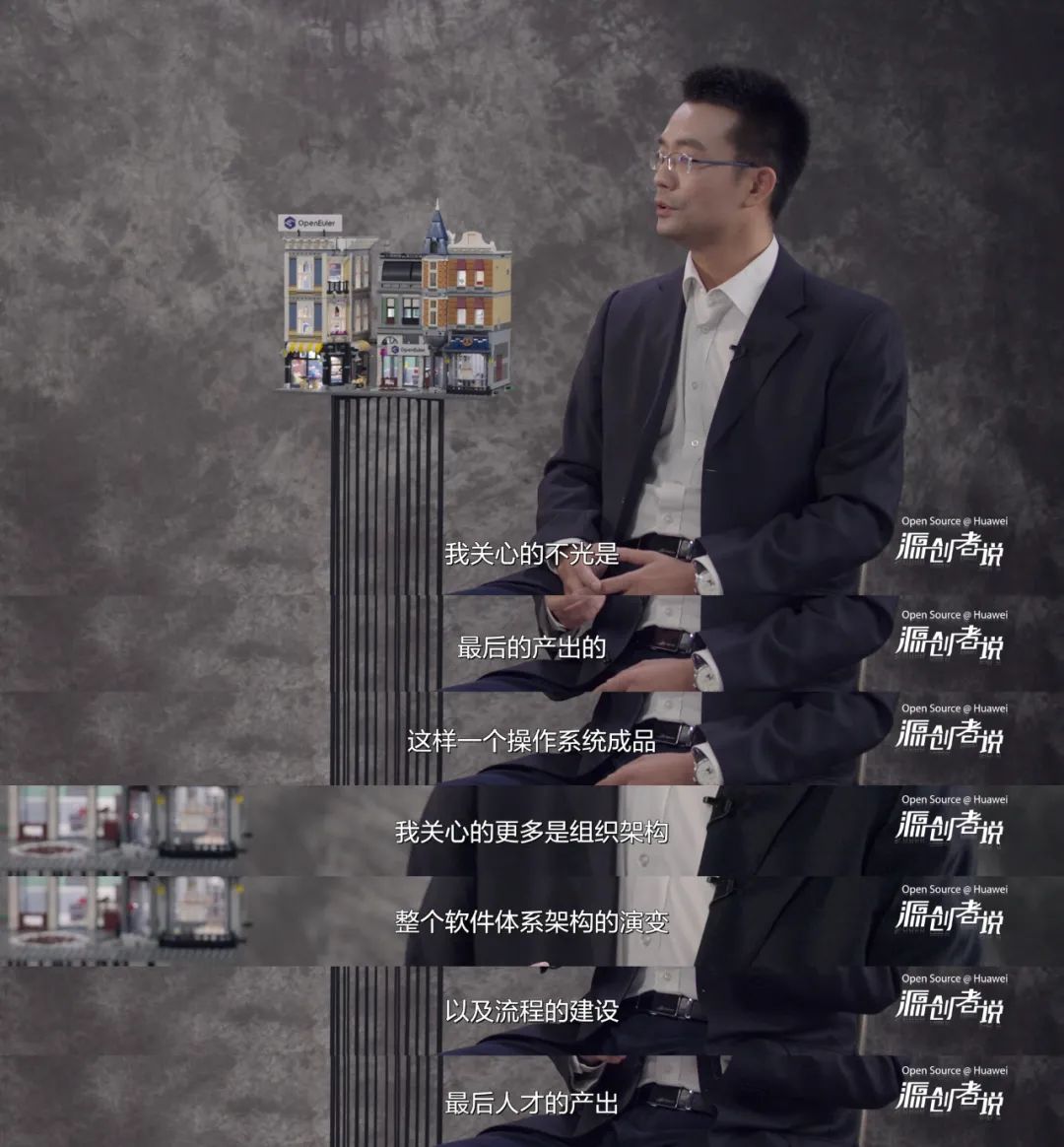 Similar to the fact that a large shopping mall will drive the consumption prosperity and economic growth of a region, after openEuler builds a good operating framework system, it will not only be an operating system community, but will also include software packages, basic libraries, A huge collection of a series of functions such as development framework, tool chain, front-end interactive system, back-end service system, user feedback and communication system, and multi-language support. The community will form a huge public resource pool. On the unified resource pool, combined with construction tools, it can customize the capabilities of different types of operating systems according to the different needs of users, and promote the exploration of high-level core software technologies. The software industry is a pivotal force.

Winning the recognition and support of partners with open source, the core driving force of openEuler's rapid growth

From the perspective of the infrastructure of the digital world, software and hardware need a more solid foundation; from the perspective of the iterative upgrade of the global computing industry, a new operating system that is more in line with future computing needs is needed. The operating system will shoulder the responsibility of this special historical opportunity node. the major mission of transformation. In fact, for openEuler, strengthening horizontal collaboration through open source code, and strengthening upstream and downstream collaboration in the industry chain through basic software and hardware adaptation, application adaptation, and overall machine integration adaptation are gradually forming a systematic technology and industrial ecology. key.

In this process, the participation of community participants is inseparable. According to public information, since the open source code was opened on December 31, 2019, openEuler has become the most dynamic open source community in China, with more than 400,000 downloads and more than 1 million commercial applications in 2021. In just two years, the openEuler community has attracted nearly 10,000 contributors, 300+ partners, and established nearly 100 SIG groups. 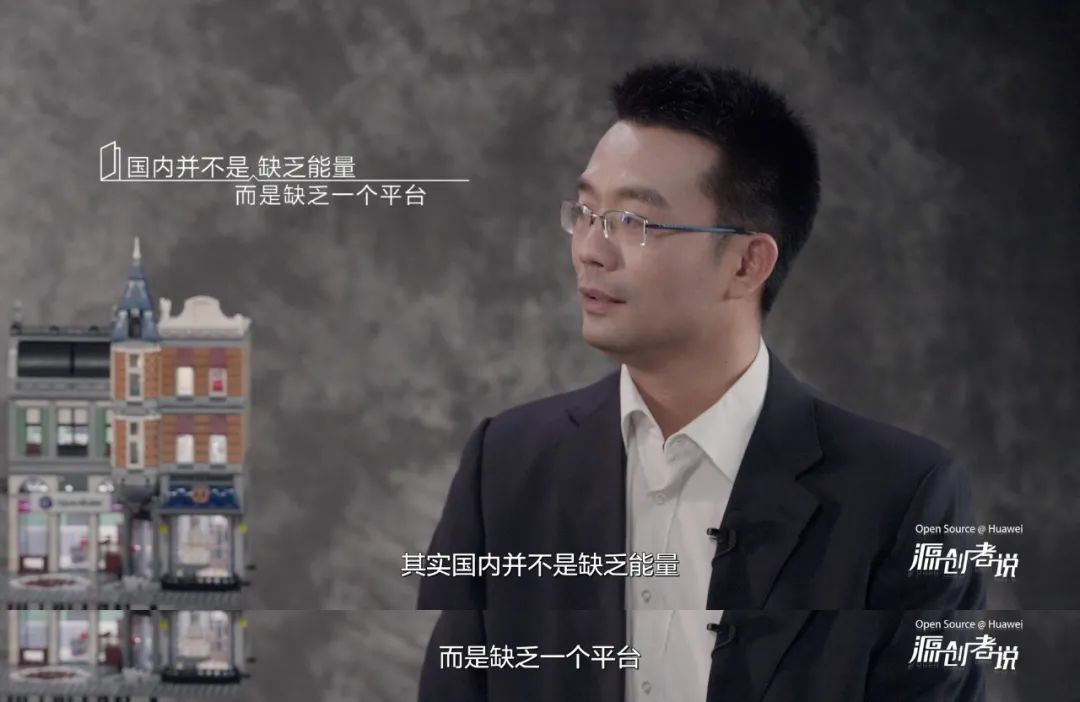 Xiong Wei is deeply aware that China's IT industry does not lack the energy and motivation of open source collaboration, but it lacked a platform with sufficient appeal before. When a platform like openEuler is established, the energy contained in the industry can be quickly gathered and released, creating amazing results.

In openEuler 20.09, the second version released by the community, more than 30% of the work is contributed by companies other than Huawei. Version 20.09 is China's first large-scale operating system platform jointly developed by different companies, which is a milestone event in the entire history of Chinese operating system development. We would like to thank our industry partners for their great enthusiasm and contribution to openEuler. Without such joint efforts, there would be no openEuler's outstanding achievements and unlimited potential today. 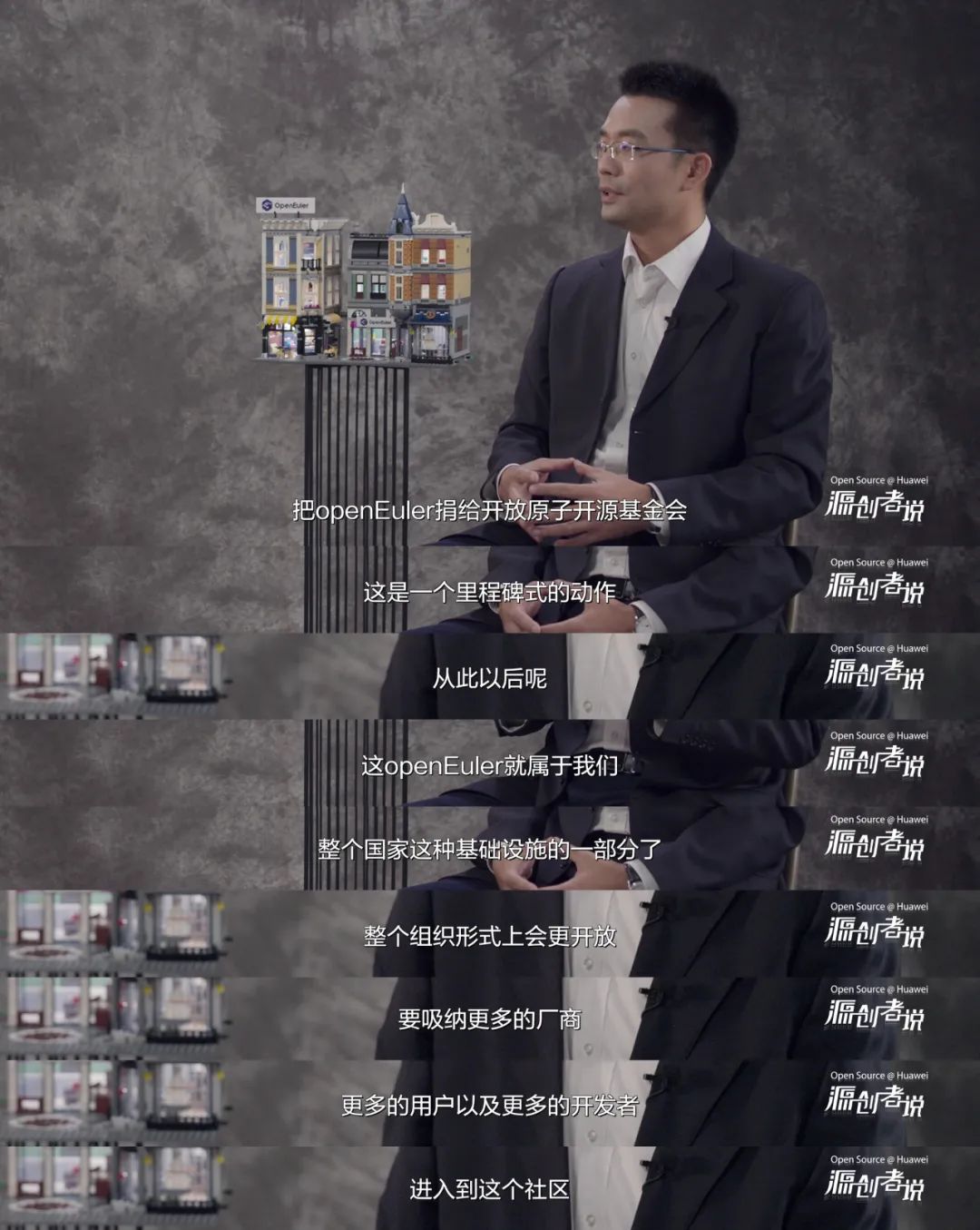 As an open community, openEuler brings together various forces such as enterprises, research institutes, universities, brother communities, individual enthusiasts, and even middle school students. Some companies compete in business, but in the community, these companies that compete in business can sit together, jointly formulate technical standards, work together, and jointly complete product research and development, which has established the best industrial cooperation for Chinese companies. template. Numerous research institutes and universities can conduct scientific research and teaching based on openEuler, which not only builds a bridge for cooperation between industry, university and research, but also opens up the channel between scientific research and industry, and also reserves more talents for the future of the industry. Everything these partners do in openEuler is contributing to China's basic industries.

In the latest openEuler 20.09 version, Huawei's overall contribution has dropped to less than 50 percent. openEuler has truly become a public basic platform jointly built by industry partners. In the future, this platform will gather more and more partners to realize the community practice of co-construction, sharing and co-governance.

From mall to chain giant: the future of openEuler

"If openEuler is compared to a large chain store, then my biggest expectation is that openEuler can achieve internationalization and grow into a global chain store". When it comes to the future development of openEuler, Xiong Wei said.

With the further development of the community, the openEuler community needs to always adhere to the concept of "co-construction, sharing, and co-governance", and work together to create an operating system for diverse computing scenarios. Therefore, the openEuler community needs to continuously optimize the organizational structure, maintain a good and healthy ecosystem, and build a good open source process in the process, and build a talent echelon that understands open source, infrastructure, chips, and system architecture.

As a trusted open source citizen, Huawei works with partners to promote inclusiveness, fairness, openness, and more solidarity through continuous contributions, build a world-class basic software open source community, and accelerate the digitalization of the industry.

· Active participant and supporter of major open source organizations. At present, Huawei is a top/start-up member of dozens of international open source foundations.

· Contribute to open source basic software on a large scale, consolidate the ecological foundation of digital infrastructure, and work with partners and developers to build an open source ecosystem. In the past two years, Huawei has open sourced multiple platform-level basic software open source projects such as KubeEdge, Mindspore, openEuler, openGauss, and OpenHarmony for cloud native, automation, and intelligence, becoming an open source community accepted by developers around the world. Industry commercial landing.

· Actively build a sustainable, viable and credible open source community. Huawei is committed to improving the community ecological governance structure to ensure the continuous evolution of the community.