What should I do if the Redis memory is full? This setting is correct!

Last time I was in " Will Redis data be deleted immediately when it expires?" "Speaking of if there is too much expired data, it cannot be completely deleted by regular deletion (more than 25% of expired keys are still deleted after each deletion), and at the same time, these keys will never be requested by the client again, so they cannot be deleted lazily, and the memory will be hit. What will happen to the full?

The answer is to take the memory elimination mechanism .

The story begins with the official position of the three princes and nine ministers of the Redis Empire...

The limit on the size of national land resources occupied by civil servants is set by judicial officials named "maxmemory". There are two ways to achieve this:

There is a limit on the resources of the imperial official site, and the selection of new people every year will result in no site resources to use. What should I do? How to choose some civil servants to eliminate?

In the era of Redis 4.0, there were a total of 6 elimination strategies, and then 2 strategies were added.

In general, we can divide them into two categories according to whether we need to eliminate them:

By default, resources exceeding the value of maxmemory will not be eliminated, and newcomers are not allowed to join.

This is a related household, a royal family member, a permanent VIP, hello.

With the addition of officials, the resource capacity will be full sooner or later because it will not be eliminated. After it is full, when a "new person" wants to come in, Redis directly returns an error and strikes .

The remaining 7 strategies can also be divided into two categories according to the set of candidates for elimination and the scope of elimination:

The story ends here. Next, "Code Brother" will share with you how to choose the appropriate elimination strategy and set the best cache size in the actual Redis.

The elimination execution process is shown in the following figure: 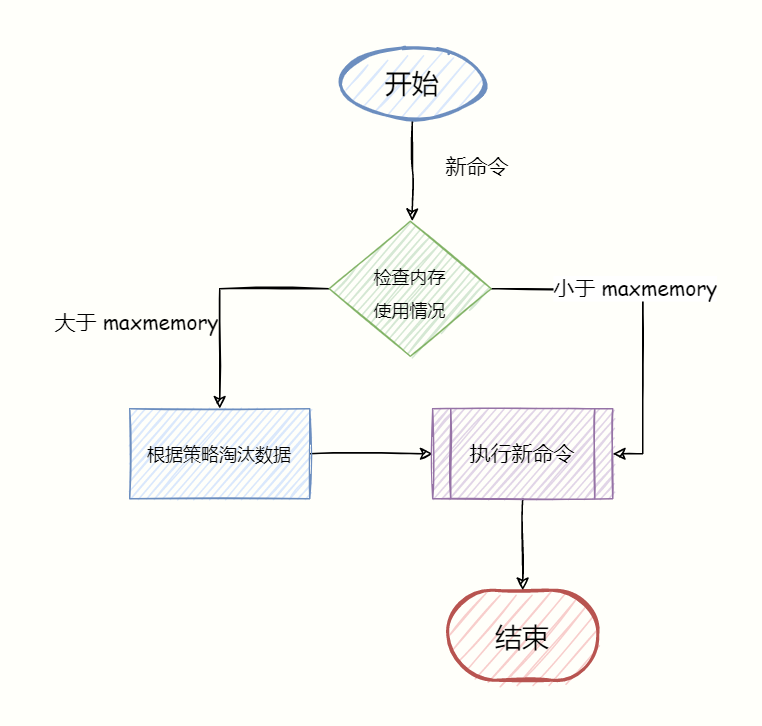 If your application has obvious differences between hot and cold data, it is recommended that you use this strategy based on experience, make full use of the LRU algorithm to retain the most frequently accessed data recently , and improve access performance with limited memory.

If there is no obvious difference between hot and cold data, all data distribution queries are relatively balanced, and these data will be randomly queried, then use the allkeys-random strategy to randomly select and eliminate data.

In business scenarios, there are some data that cannot be deleted, such as top news and videos. At this time, we do not set an expiration time for these data, so that the data will not be deleted. The least recently accessed data.

One thing to note is that executing expire time for the key will consume some memory, so using allkeyds-lru will improve memory efficiency.

It is a better solution to use different Redis instance clusters for business systems that need to hold data that cannot be deleted and that can all eliminate data.

For business scenarios, some data cannot be deleted using the volatile-lru strategy, and the other type can use allkyes-lru 或者 allkeys-random .

How appropriate is the Redis capacity setting?

Cache is not the bigger the better, the boss wants to get the highest profit with the least cost.

Data access is localized, according to the "28 principle": usually 20% of the data can support 80% of the access requests.

So can we set the cache size to 20% of the total data volume?

Of course, it can't be so absolute, this is the ideal state. Because there may be some personalized needs, the data accessed by different users may be very different, and the "two-eight principle" is not completely applicable.

We should make a comprehensive assessment based on actual access characteristics and costs. According to experience, it is recommended to set the capacity to 15%~30% of the total data volume.

Brother code, other elimination rules are relatively simple, volatile-lru and volatile-lfu are more complicated, what is their algorithm?

As for the specific algorithm details, we will break it down next time. If you do too much at one time, you will easily choke in the ocean of knowledge.

The reading of the article is getting lower and lower

Can you call me a pretty boy in the comment section?

If you don't want to call me pretty, can you give me a like and watch it?