Light up ⭐️ Star · Light up the road to open source

The official version 3.0.0 has undergone the most significant changes since its release, adding many new functions and features, aiming to bring users a new experience and more value.

The iterative 3.0.0 official version is roughly the same as the main function and feature updates, optimizations, and bug fixes described in the previous 3.0.0 alpha version update, including the four "faster, stronger, more modern, and easier to maintain". summary of keywords .

For the new functions and optimizations after the version iteration, this article will make supplements.

The keywords of 3.0.0 remain unchanged, and the features of "faster, stronger, more modern, and easier to maintain" are believed to be experienced by everyone in use.

The new functions and features described in detail earlier include:

The biggest change in 3.0.0 is the introduction of a new UI, the language page does not need to be reloaded, and a dark theme has been added. The new UI uses Vue3, TSX, Vite related technology stack. Compared with the old UI, the new UI is not only more modern, but also more user-friendly in operation, and the front-end is more robust. Once users find problems in the code during compilation, they can verify the interface parameters, thereby making the front-end code more efficient. robust.

In addition, the new architecture and new technology stack not only allow users to respond dozens of times faster when operating Apache DolphinScheduler, but also hundreds of times faster for developers to compile and start the UI locally, which will greatly shorten the time for developers. Time required to debug and package code. 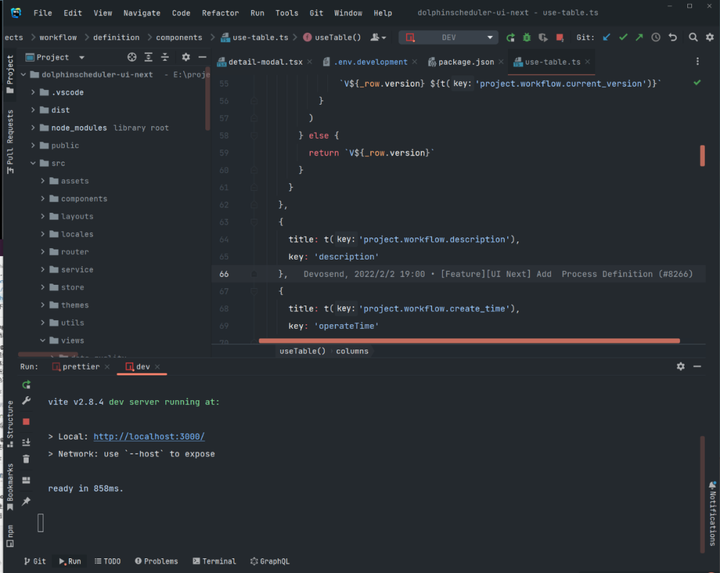 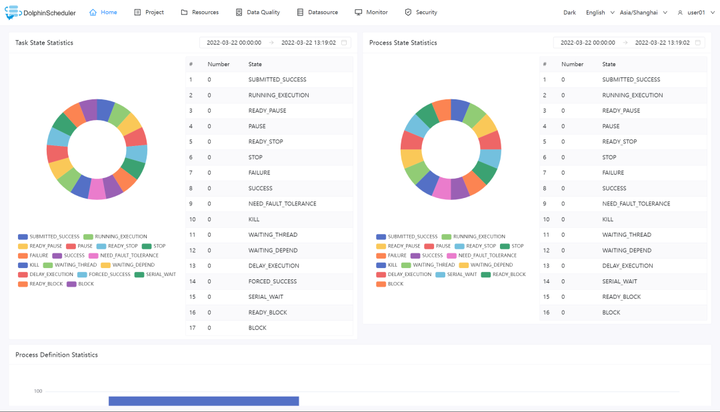 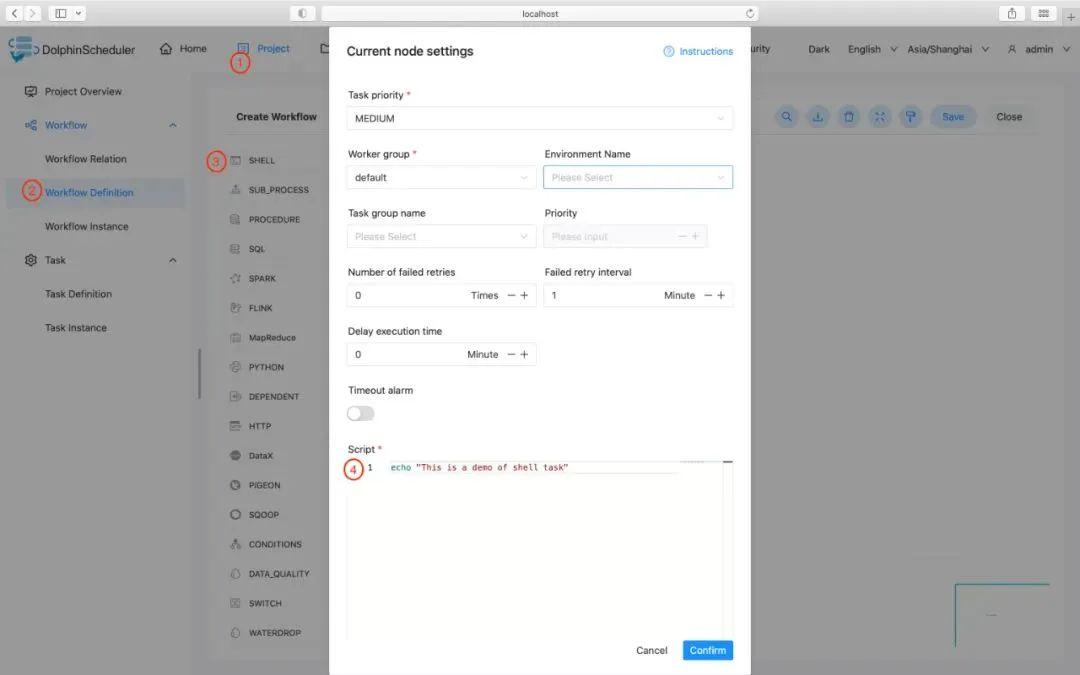 As the user group of Apache DolphinScheduler becomes more and more abundant, it attracts many overseas users. However, in the overseas business scenario, during the research process, users found that there are two points that affect the user's convenient experience of Apache DolphinScheduler. One is the time zone issue, and the other is the lack of support for overseas cloud vendors, especially AWS. In this version, we decided to support the more important components of AWS, which have covered Amazon EMR and Amazon Redshift two AWS task types, and implemented the resource center to support Amazon S3 storage.

Details can be found here: https://dolphinscheduler.apache.org/zh-cn/docs/latest/user_doc/guide/task/emr.html 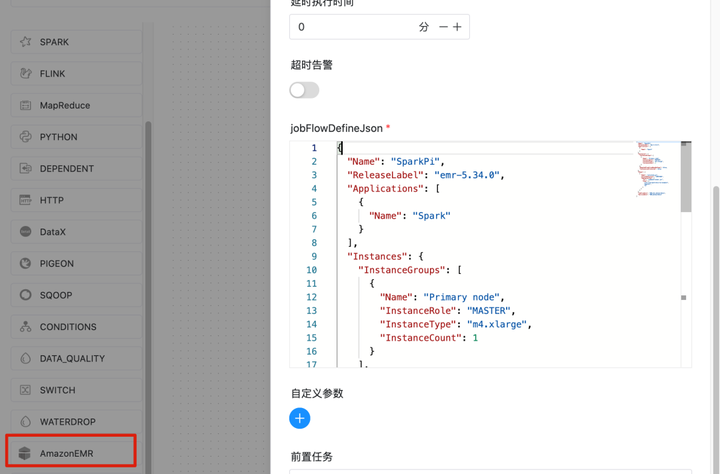 We will support more AWS tasks in the future, so stay tuned.

The new UI is the biggest change in the front end of 3.0.0, and the biggest change in the back end is the splitting of services. Considering the growing popularity of the concept of containers and microservices, the Apache DolphinScheduler developers made a major decision: splitting the backend services. According to the function, we split the service into the following parts:

All services are available through

way to start or stop.

In this version, the long-awaited data quality assurance application function has been launched since 2.0.0, which solves the problem of the accuracy of the number of data items synchronized from the source, and the alarm that the single-table or multi-table weekly average and monthly average fluctuation exceeds the threshold, etc. Data quality issues. The previous version of Apache DolphinScheduler solved the problem of running tasks in a specific order and time, but there is no more general measure of the quality of the data after the data is run, and users need to pay additional development costs.

Now, 3.0.0 has realized the native support of data quality. Users can easily realize data quality monitoring through configuration, and ensure the accuracy of the running results under the premise of ensuring the running of the workflow.

The task group is mainly used to control the concurrency of task instances and clarify the priority within the group. When creating a new task definition, the user can configure the task group corresponding to the current task, and configure the priority of the task running in the task group. After a task is configured with a task group, the execution of the task must not only satisfy the success of all upstream tasks, but also satisfy that the tasks running in the current task group are smaller than the size of the resource pool. When it is greater than or equal to the resource pool size, the task will enter the waiting state for the next check. When multiple tasks in the task group enter the queue to be run at the same time, the task with higher priority will be run first.

See the link for details: https://dolphinscheduler.apache.org/zh-cn/docs/3.0.0/user_doc/guide/resource.html

Before version 3.0.0, the default time of Apache DolphinScheduler was UTC+8 time zone, but with the expansion of user groups, overseas users and users who conduct cross-time zone business overseas are often troubled by time zones in use. After 3.0.0 supports time zone switching, the problem of loss is easily solved, meeting the needs of overseas users and overseas business partners. For example, if the time zone involved in the business of the enterprise includes the East Eighth District and the West Fifth District, and you want to use the same DolphinScheduler cluster, you can create multiple users. Each user uses its own local time zone, and the time displayed by the corresponding DolphinScheduler object will be Switching to the local time of the corresponding time zone is more in line with the usage habits of local developers.

See the link for details: https://dolphinscheduler.apache.org/zh-cn/docs/3.0.0/user_doc/guide/howto/general-setting.html 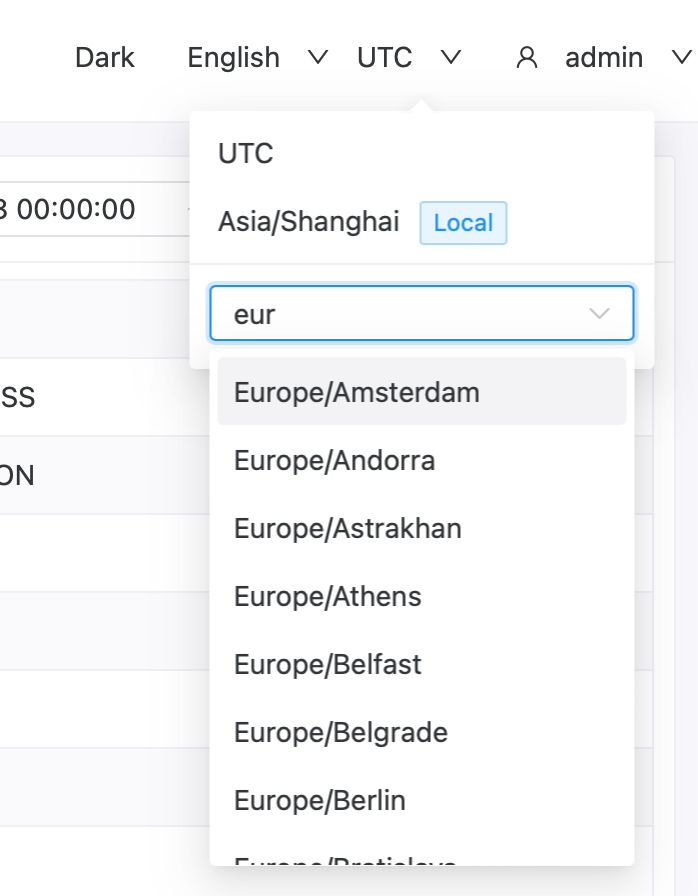 Before using Apache DolphinScheduler version 3.0.0, if users want to operate a task, they need to find the corresponding workflow first, and locate the position of the task in the workflow before editing. However, when the number of workflows increases or a single workflow has more tasks, the process of finding the corresponding tasks will become very painful, which is not the easy to use concept pursued by Apache DolphinScheduler. Therefore, we have added a task definition page in 3.0.0, allowing users to quickly locate tasks through task names, and operate tasks to easily change tasks in batches.

See the link for details: https://dolphinscheduler.apache.org/zh-cn/docs/3.0.0/user_doc/guide/project/task-instance.html

In 3.0.0, the alert type has also been expanded, and we have added support for Telegram and Webexteams alert types.

Currently, the CLI only has two subcommands, version and config, which are used to confirm the current version and add or delete configuration files. In the future, we will introduce more functions to facilitate users to operate DolphinScheduler through the command line.

It is worth noting that the Python API also supports the function of adding and uploading resource center files, which is convenient for resource management; supports writing different names for different workflows in the same project; adding integration tests to make testing more convenient.

In this release, we have extended the Flink task type to support running Flink SQL tasks, which use sql-client.sh to submit tasks. In previous versions, we only supported submitting tasks through flink cli. This method needs to combine the resource center, submit the resource file to the resource center, and then refer to the modified resource on the task definition page, which is not for versioning and user transparency. Very friendly. As flink sql gradually becomes the mainstream of flink users, and writing sql directly on the editing page is more user-transparent, we have adopted the flink sql function contributed to the community. Users in versions after 3.0.0 can use flink more conveniently task. 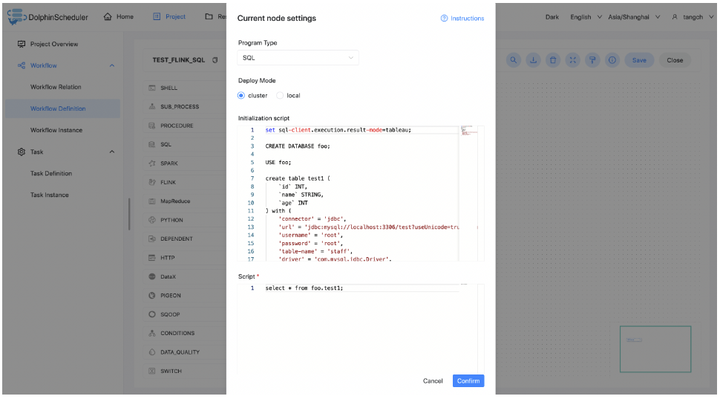 In this release, we have added the Zeppelin task type for creating and executing Zeppelin type tasks. When the worker executes this task, it triggers the Zeppelin Notebook section through the Zeppelin Cient API. 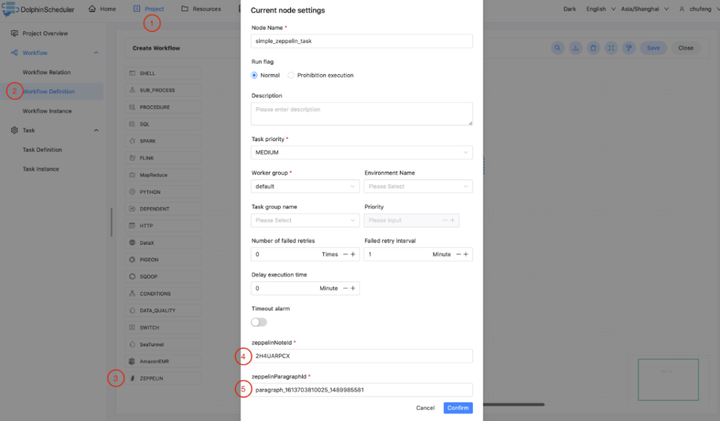 The new version also adds the function of passing parameters through bash. If you want to use bash variables instead of constant value export parameters in downstream tasks, you can do it through setValue and Bash variables. It is more flexible and allows you to dynamically obtain Existing local or HTTP resources get set variables.

Similar syntax can be used

Allow users to upload files without a suffix

In addition to the above-mentioned new functions, version 3.0.0 has also carried out many detailed function enhancements, such as refactoring task plug-ins and data source plug-in modules to make expansion easier; support for Spark SQL has been restored; E2E testing has been perfectly compatible with the new UI Wait.

With the rapid rise of domestic open source, the Apache DolphinScheduler community has ushered in vigorous development. In order to make more usable and easy-to-use scheduling, we sincerely welcome partners who love open source to join the open source community and contribute to the rise of open source in China. , let local open source go global.

There are many ways to participate in the DolphinScheduler community, including:

Contributing the first PR (documentation, code) We also hope that it is simple, the first PR is used to get familiar with the submission process and community collaboration and to feel the friendliness of the community.

The community has put together the following list of issues for newbies: https://github.com/apache/dolphinscheduler/issues/5689

How to contribute link: https://dolphinscheduler.apache.org/en-us/community/development/contribute.html

Come on, the DolphinScheduler open source community needs your participation and contribute to the rise of China's open source, even if it is just a small tile, the combined power is huge.

Participating in open source can learn from various experts at close range and quickly improve your skills. If you want to contribute, we have a contributor seed incubation group (Leonard-ds), which will teach you hands-on (contributors regardless of level, if you have any questions Must answer, the key is to have a willingness to contribute).

When adding a small assistant, please indicate that you want to participate in the contribution.

Come on, the open source community is looking forward to your participation.

In August, the Apache DolphinScheduler community joined the Apache Kylin community to jointly hold a Meetup with the theme of "Construction and Prospect of Big Data Base, Helping Enterprises' Digital Transformation" is about to start! We are also fortunate to invite senior big data engineers and developers from companies such as Yili, T3 Travel, Beluga Open Source, Apache Kylin Community, etc. to discuss topics such as data analysis engines, data scheduling, digital transformation, and maintenance of open source in the two open source Project development practices.